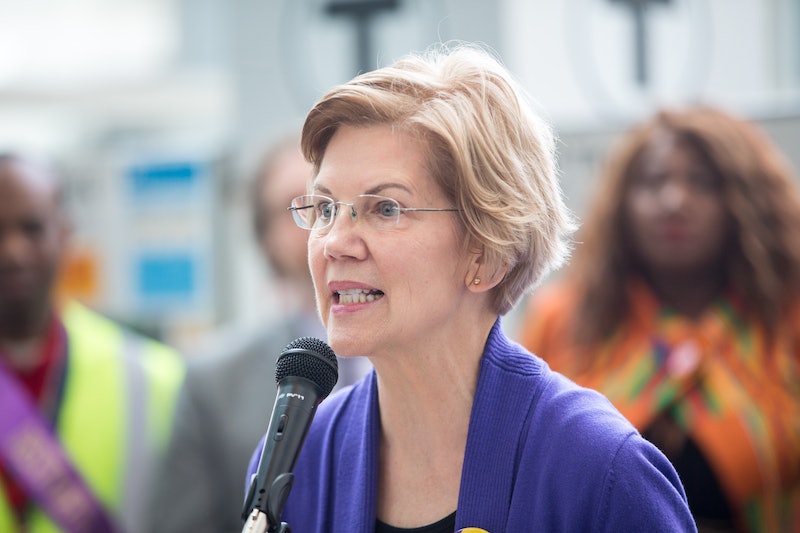 In an interview with the Washington Post, Sen. Elizabeth Warren apologized for identifying as Native American at various points in her career. The news comes days after Warren privately apologized to the chief of Cherokee Nation for releasing a DNA test that she cited as evidence of her Native American ancestry.

“I can’t go back,” Warren told the Post. “But I am sorry for furthering confusion on tribal sovereignty and tribal citizenship and harm that resulted.”

During her academic career, Warren claimed on at least two occasions — one of which was reported by the Post for the first time Tuesday — that she was Native American. The Boston Globe reports that while teaching at the University of Pennsylvania's law school in 1989, Warren had the administration change her listed ethnicity from "white" to "Native American." On Tuesday, the Post revealed that in 1986, Warren listed her race as "American Indian" on a registration card for the State Bar of Texas.

In a lengthy analysis in 2018, the Globe concluded that Warren didn't use her claims of Native American ancestry to advance her career. Nevertheless, she's been criticized for claiming minority status since at least 2012, when her opponent in a Senate race brought it up in a debate, and President Trump — in a move that's drawn him criticism as well — derisively refers to Warren as "Pocahontas" due to her claims.

In an attempt to quell the criticism, Warren commissioned a Stanford genetics professor to test her DNA. According to the report, the results "strongly support" the claim that Warren has at least one Native American ancestor. She also released a video that dove further into her ancestry.

However, the DNA test only heightened the criticism. Cherokee Nation Secretary of State Chuck Hoskin Jr. accused Warren of "undermining tribal interests with her continued claims of tribal heritage," and noted that a DNA test "is useless to determine tribal citizenship."

"Sovereign tribal nations set their own legal requirements for citizenship, and while DNA tests can be used to determine lineage, such as paternity to an individual, it is not evidence for tribal affiliation," Hoskins said at the time. "Using a DNA test to lay claim to any connection to the Cherokee Nation or any tribal nation, even vaguely, is inappropriate and wrong. It makes a mockery out of DNA tests and its legitimate uses while also dishonoring legitimate tribal governments and their citizens, whose ancestors are well documented and whose heritage is proven."

On Friday, Cherokee Nation said that Warren had apologized.

"Senator Warren has reached out to us and has apologized to the tribe," Julie Hubbard, the executive director of communications for the tribe, said in a statement provided to ABC News. "We are encouraged by this dialogue and understanding that being a Cherokee Nation tribal citizen is rooted in centuries of culture and laws not through DNA tests. We are encouraged by her action and hope that the slurs and mockery of tribal citizens and Indian history and heritage will now come to an end."