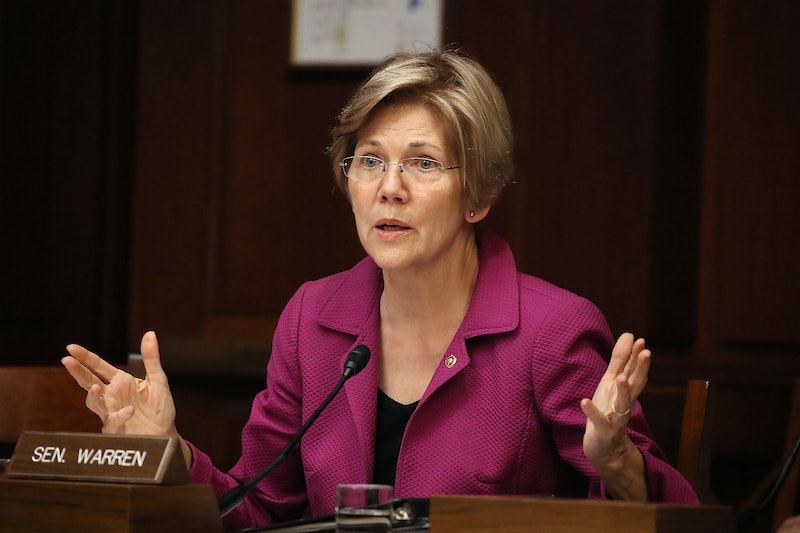 The Equifax data breach, leading to personal and financial data of 143 million people being stolen by hackers, has sparked outrage at the way that financial and tech companies, especially one like Equifax that bases part of its business on protecting consumers from identity theft, handle the data the collect from Americans. And when there's a financial institution behaving badly, we've all come to expect that the junior senator from Massachusetts will be there to express the public's outrage. On Wednesday, we got that, as Sen. Elizabeth Warren blasted Equifax's CEO over the data breach.

Warren was unrelenting in challenging Richard Smith, who recently retired from Equifax with a $90 million in vested stock. She centered on the way that, despite the enormous failure of the company to do what it promises to do with customers' data, it seems to be continuing to profit and may even be making more money off of its mistakes. Warren zeroed in on a quote that the CEO made back in August, shortly before the massive data breach was revealed to the public, where he said, "“Fraud is a huge opportunity for us. It is a massive, growing business for us.” Warren repeated that line at the Senate hearing on Wednesday morning, asking the hack would lead to more fraud cases:

The breach of your system has actually created more business opportunities.

She also focused on the promise by Equifax to provide free credit monitoring for a year to help customers deal with the fallout from the data breach, and highlighted how that expires after a year, meaning that Equifax will start charging people who signed up to get help from the company in dealing with the company's failures. She suggests the company could see as much as $200 million in new revenue from people paying for this service once the free period expires.

She also talked about how Lifelock, which aims to protect people from identity theft, has seen its own massive increase in sales in response to the Equifax breach. Lifelock, however, uses numerous Equifax services, essentially meaning that money people spend on Lifelock to protect them from the Equifax hack goes back to Equifax. Warren said:

From the second Equifax announced this massive data breach, Equifax has been making money off consumers who purchase their credit monitoring through Lifelock.

Warren also pointed to how Equifax works with the government (and gets paid by it) to fight identity theft. "You've got three different ways that Equifax is making money — millions of dollars — off its own screw-up. And meanwhile, the potential cost to Equifax are shockingly low," she asserted.

Warren perhaps drove the point home strongest by talking about the past four years of hacks of personal data at Equifax, and then asking, point blank, "In those four years, has Equifax's profit gone up?"

After that, Warren drove home what was clearly her takeaway from the whole fiasco:

Equifax did a terrible job of protecting our data, because they didn't have a reason to care to protect our data. The incentives in this industry are completely out of whack.

The image Warren was trying to draw was perhaps best clarified by the protester sitting behind Equifax's CEO, dressed as Rich Uncle Pennybags from Monopoly.

Since before she even entered the Senate in 2012, Elizabeth Warren has advocated for stronger protections for consumers when dealing with financial instruments. Her advocacy back when she was a Harvard Law professor is often attributed with the creation of the Consumer Financial Protection Bureau in 2010. In challenging Equifax's CEO, she clearly expressed a belief that there are still not enough protections for consumers when dealing with the financial industry:

Consumers are trapped. There's no competition, nowhere else for them to go. If we think Equifax does a lousy job protecting our data we can't take our to someone else. Equifax and this whole industry should be completely transformed.

It's unclear if any real changes are coming soon. The Trump administration has taken a notably relaxed view on regulations and the financial industry. The evidence so far suggests Equifax will probably mostly get away with its errors. But with Democrats gearing up for a populist message, going up against unaccountable corporate power, we can probably expect even more contentious exchanges from politicians like Warren against CEOs like Smith.