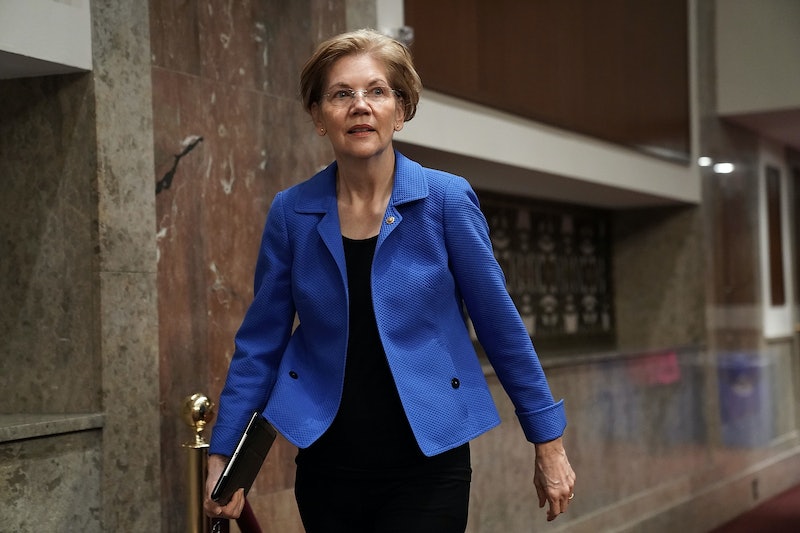 Top CEOs are making 300 times that of their average employee, the Economic Policy Institute reports, creating a wage gap some say keeps the "American Dream" out of reach for many Americans. But Massachusetts Senator Elizabeth Warren's Accountable Capitalism Act, proposed Wednesday, wants to ask more out of U.S. corporations when it comes to how they take care of their employees.

Warren's new bill aims to reshape the way capitalism functions, hopefully reversing the CEO-to-worker wage gap. Under her legislation, corporations with an annual revenue of $1 billion or more would have to register for a charter from the federal government. A charter is a legal document required to establish a corporation; it outlines the company's basic information and purpose.

In order to receive this documentation, the corporation would have to consider the needs of all company stakeholders — not just shareholders. This includes the employees, customers, and the towns in which the company operates.

According to a Wall Street Journal op-ed by Warren announcing her legislation, this is the way America's capitalism used to function. As recently as 1981, Warren said corporations aimed to provide "quality goods and services at fair prices" and thus "enhance the enterprise, provide jobs, and build the economy." It wasn't until the late 1900s that businesses decided their sole obligation was to maximize shareholder returns, she wrote.

"Before 'shareholder value maximization' ideology took hold, wages and productivity grew at roughly the same rate," Warren wrote. "But since the early 1980s, real wages have stagnated even as productivity has continued to rise. Workers aren’t getting what they’ve earned."

Warren's Accountable Capitalism Act wants to turn this around. If shareholders don't believe company directors are serving the interests of all, they'll have the right to sue.

Employees in these billion-dollar corporations will also be given a bigger voice. Under Warren's legislation, the workers elect at least 40 percent of the directors, and at least 75 percent of directors and shareholders would need to approve of any plans for "political expenditures."

According to The Guardian, Warren's bill would affect around 3,500 public U.S. companies and hundreds more private ones. Currently, these corporations get their charters at the state level, but Warren wants to make the regulations nationwide.

Some have criticized her plan as excessive government oversight, with one Breitbart News commenter going as far as saying Warren is going to "destroy American capitalism."

The Accountable Capitalism Act has gotten significant support, including the backing of scholars from Cornell University Law School, who sent the senator a letter Wednesday outlining their approval. But Warren will have to get more than the academics on board before the bill can pass Congress. If it has the support of the other lawmakers, the bill would still have to be signed by the president before becoming law.