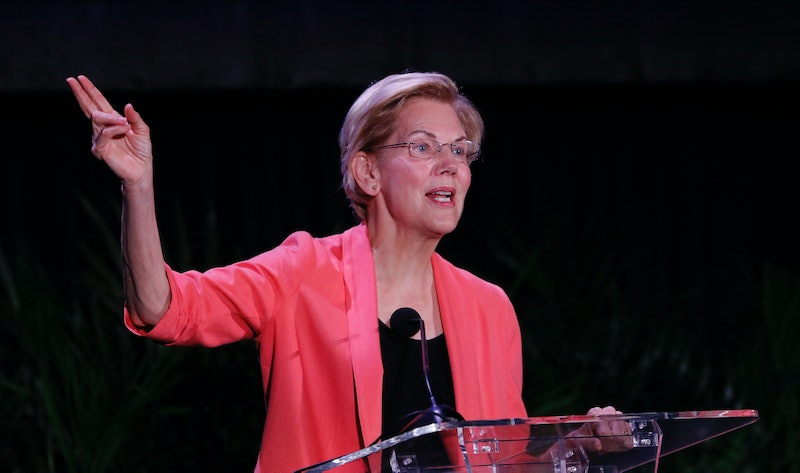 In the latest addition to her detailed slate of policy proposals, Sen. Elizabeth Warren plans to abolish private prisons if elected president, she announced in a statement Thursday. In a Medium post, Warren said that her proposal is part of a larger plan to end mass incarceration and institutional oppression of women, people of color and immigrants.

"Washington works hand-in-hand with private prison companies, who spend millions on lobbyists, campaign contributions, and revolving-door hires — all to turn our criminal and immigration policies into ones that prioritize making them rich instead of keeping us safe," Warren said. "From 2000 to 2016, the private prison population grew five times as quickly as the overall prison population. And the profiteers multiplied, too: today, nearly 4,000 corporations make money off mass incarceration."

As of 2016, around 8.5% of inmates, or 128,063 people, in the United States are detained in private prisons, according to the Sentencing Project. Warren's plan would eliminate all of the contracts the government currently has with for-profit detention centers and incentivize local governments to enact similar bans by withholding federal funds from them if they don't. She would also ban private contractors who operate in public prisons from charging inmates for essential services, like toothpaste and health care, and increase federal oversight of for-profit prisons.

In 2013, the for-profit prison industry became the center of a national scandal when two Pennsylvania judges, Michael Conahan and Mark Ciaverella, were found to have accepted bribes from a private prison contractor in exchange for sending thousands of children to two of that contractor's prisons. Conahan and Ciaverella both pleaded guilty, and are now serving prison terms themselves. More recently, private prisons came under the spotlight when John Kelly, formerly President Trump's chief of staff and homeland security director, accepted a job at the largest for-profit prison in the U.S. housing undocumented children.

In a statement to the Daily Caller, Pablo E. Paez, executive vice president of private prison operator GEO Group, said that Warren's plan for private prisons amounts to "a continuation of politically motivated attacks based on false narratives," and that his company's facilities "are highly rated by independent accreditation entities." However, Warren noted in her Medium post that private prisons have higher rates of assault and over twice as many grievance reports against correctional officers as do public prisons, according to a 2016 investigation by Justice Department.

Warren said that eliminating private prisons, in addition to a worthy goal in its own right, is a necessary step to rectifying broader systemic issues of inequality in America.

"Our criminal and immigration systems are tearing apart communities of color and devastating the poor, including children," Warren wrote. "Women — especially women of color — are particularly saddled with the financial burden. We need significant reform in both criminal justice and in immigration, to end mass incarceration and all of the unnecessary, cruel, and punitive forms of immigration detention that have taken root in the Trump Administration."