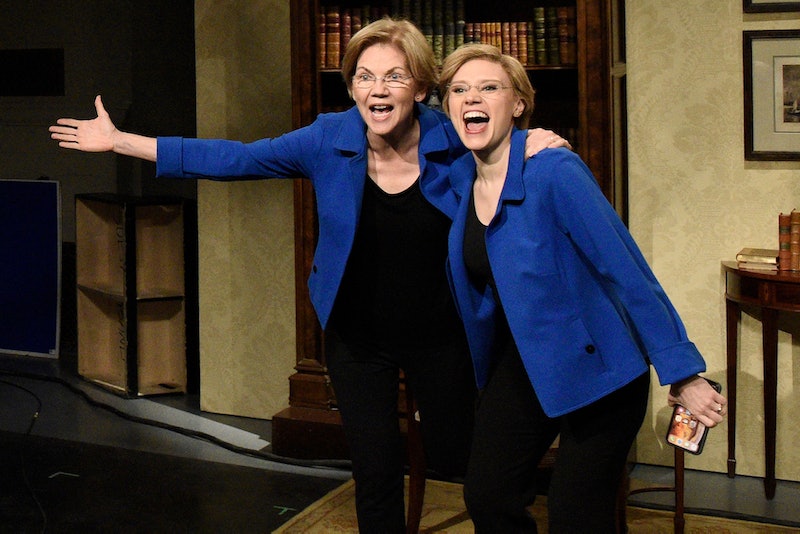 TikTok just received the presidential (hopeful) treatment: Elizabeth Warren took on TikTok’s “Flip the Switch” challenge with Saturday Night Live’s Kate McKinnon. The former presidential candidate, who suspended her campaign on March 5, made a surprise cameo in the cold open of the March 7 episode of SNL hosted by Daniel Craig. Warren joined McKinnon, who regularly portrays the Massachusetts senator on the show, at the end of the segment that spoofed Laura Ingraham's Fox News show The Ingraham Angle to bellow out the signature line, “Live from New York, it’s Saturday Night Live!” However, a backstage TikTok moment between Warren and McKinnon has eclipsed the cameo.

Decked out in matching outfits and hairstyles, Warren and McKinnon take on the “Flip the Switch” challenge that features participants swapping positions along to lyrics from Drake’s 2018 song, “Nonstop”: “I just flipped the switch.” Warren initially holds the phone to the mirror in the foreground as McKinnon dances to the track in the background. When “I just flipped the switch” comes on, McKinnon is swapped to the front as Warren dances to the track in the background. Unable to keep a straight face, McKinnon breaks character and begins to laugh.

In SNL’s cold open, Warren appeared as herself and addressed her recent concession from the presidential race. “I’m doing just fine,” she told McKinnon’s Ingraham. “My friends and family have been so supportive. They've been calling non-stop, asking 'Are you okay? What do you need? Were you electable?' That kind of thing." She also joked about her potential endorsement of another candidate and said, “Maybe I'll just pull a New York Times and endorse them both.” (The Times endorsed both Warren and former candidate Amy Klobuchar in January.)

Warren’s campaign suspension leaves former Vice President Joe Biden, Vermont Sen. Bernie Sanders, and U.S. Rep. of Hawaii Tulsi Gabbard as the remaining contenders for the Democratic nomination against Donald Trump. During her exit speech in Massachusetts, Warren referenced her role as one of the few major female candidates in the race and cited “all those little girls who are gonna have to wait four more years.”

When asked about the role of gender and sexism in her presidential bid, Warren told reporters, per NPR, “That is the trap question for every woman. If you say, 'Yeah, there was sexism in this race,' everyone says, 'Whiner!' And if you say, 'No, there was no sexism,' about a bazillion women think, 'What planet do you live on?'” She added, "I promise you this: I will have a lot more to say on that subject later on."

Watch Warren and McKinnon's "Flip the Switch" TikTok challenge above.

More like this
Pedro Pascal Barely Got Through The "Lisa From Temecula" 'SNL' Sketch
By Stephanie Topacio Long
Michael B. Jordan Tackled His "Public Breakup" With Lori Harvey On 'SNL'
By Brad Witter
Who Is Pete Davidson Dating? He & Chase Sui Wonders Got Caught Kissing
By Jake Viswanath
Matt Hancock’s TikTok Is The Most Matt Hancock Thing Ever
By Sam Ramsden
Get Even More From Bustle — Sign Up For The Newsletter
From hair trends to relationship advice, our daily newsletter has everything you need to sound like a person who’s on TikTok, even if you aren’t.