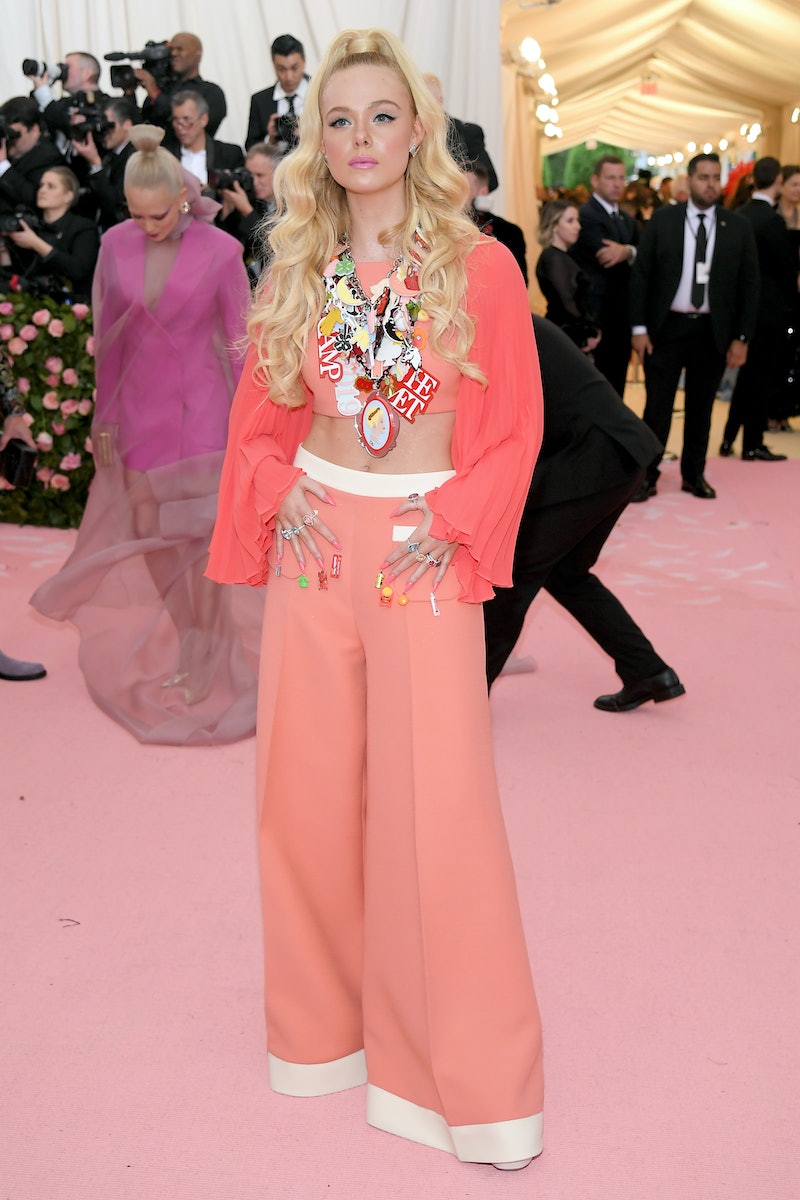 The theme for the 2019 Met Gala was "Camp: Notes on Fashion," and celebrities, models, and artists interpreted the theme in their own, unique ways as they waltzed down that millennial pink carpet. Some interpretations were super literal while others took liberties. Elle Fanning's 2019 Met Gala look was one of the campiest of the night, since it featured statement, fast food charms dangling from her nails and a '70s-inspired, pastel pantsuit. Her pink, almond-shaped nail art included kitschy charms shaped like french fries, toothpaste, and more. It was legitimately yummy.

Fanning's look was actually all about her hands, since she piled gemstone rings on most of her fingers. Her Met Gala manicure definitely won the night.

The actor was clearly enjoying herself while rocking this ensemble. Overall, her presentation was a marked difference from her 2018 Met Gala gown, which was an angelic and white dress that was custom made for her by Miu Miu.

While Fanning's manicure was mega and certainly appeared to be something that would impede her from doing daily tasks like writing, taking out contact lenses, or opening doors with ease, the actor switched sartorial gears and did something different than most of her peers. While many Met Gala attendees opted for epic, dramatic, and voluminous gowns, Fanning went with youthful, two-piece ensemble, that golden, I Dream of Jeannie high ponytail, and mod makeup.

Now that's nail art of the highest order. It might remind you of some of the glorious yet impractical nail art created by the techs at Nail Sunny. But, hey, it was the Met Gala and fun for the night.

Fanning served it so hard with her nails, which she paired with wide pink bell bottoms and a matching crop top with winged sleeves. She was all about the volume and wasn't afraid to be all sorts of extra when accessorizing.

Fanning completed her look with that huge charm necklace. At first, her outfit might have seemed a bit too casual for the Met Gala, which is usually the cream of the couture crop. But it was merely Fanning's excellent interpretation of the evening's theme — and it worked so well.

Claws up! If you are totally loving the base shade of Fanning's, well, charming charm nails, she was wearing a brand new shade called "Strike A Rose" from Essie's Summer 2019 collection, which drops this month. You are so going to want to rock that hue during pedicure and open-toed shoe season.

Celebrity manicurist Mar y Sol Inzerillo weighed in on the inspiration for the actor's nails in the press materials received by Bustle. "Elle is the definition of camp," she said. "She wanted an expressive, bold look and we went for it! We started with Essie's Strike a Rose, a neon hot pink with a demi-matte finish, from the new summer 2019 collection. Then, each almond-shaped nail was pierced and adorned with fun vintage charms, from french fries to Bubble Yum and more! The end result was a show-stopping moment on tonight's pink carpet."

Elle Fanning totally nailed it at the Met Gala — from her tips to her toes.