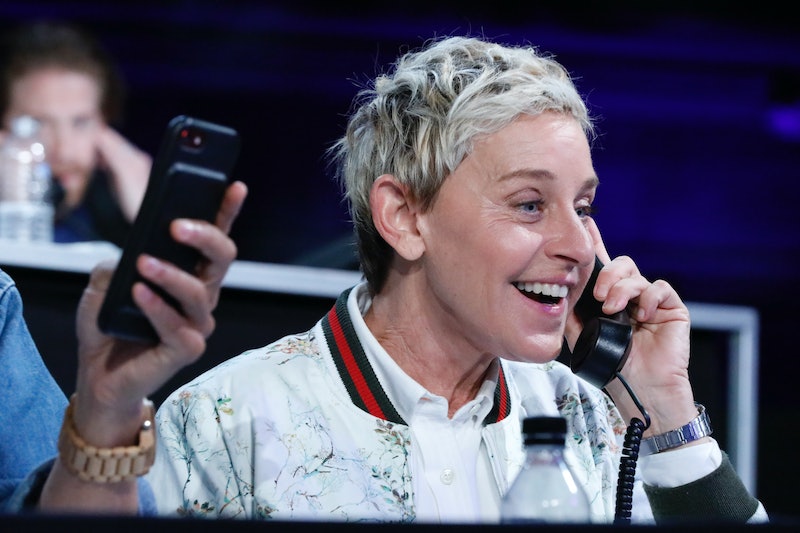 In a segment on her talk show on April 30, DeGeneres appeared before her live and television audiences with a different look. While the talented host and actor has always had different iterations of short, blonde hair, the new 'do was markedly shorter than anything she'd had recently, and it was certainly a different shade of blonde than her usual look. Turns out that there's both a sad and hilarious reason why. In typical DeGeneres fashion, she decided to explain her new hairdo in her own way.

When DeGeneres stepped on stage, she noted the change in her look to her audience and added that she had her hair done over the weekend. By weekend, though, she truly meant that her hair nightmare began on Thursday and didn't end until the day before she was to host her show.

The stylist she was working with then attempted to re-do DeGeneres' color. With time running out for the host's schedule, though, the failed stylist ultimately explained that the poor job would eventually wash out. Yes, you should be cringing at that statement.

"I couldn't even pinpoint what color it was," she says in the video posted to her show's YouTube account, "It was like orange and pink and purple. I had the Pride flag on my head. It was kind of greenish ashy, so you couldn't tell where my skin stopped and the hair started."

The color, however, may not have even been the worst part. If you've ever bleached your hair, you know the process is rough on your poor strands. That was the same with DeGeneres. She went on to explain that because of the processing, her hair was actually falling out. In fact, it was so bad that when she touched it, she lost more hair. She joked, "My hair was so embarrassed, it didn't want anything to do with my head and said I'm getting out of here."

Thankfully, DeGeneres was able to find people who could help out her strands, but the task was quite an undertaking. Given just how damaged her hair was, the new hairstylist didn't want to apply heat. He and an assistant warmed up her hair in their hands to get it to process. Yes, really. The fact that DeGeneres isn't crying in any of her videos of the process is kind of miraculous.

Ultimately, though, thanks to their hard work, DeGeneres' bad dye job turned out OK, minus the plethora of damage her hair sustained. While an experience like DeGeneres' is certainly a nightmare, at least the host and actor could take it all in stride.