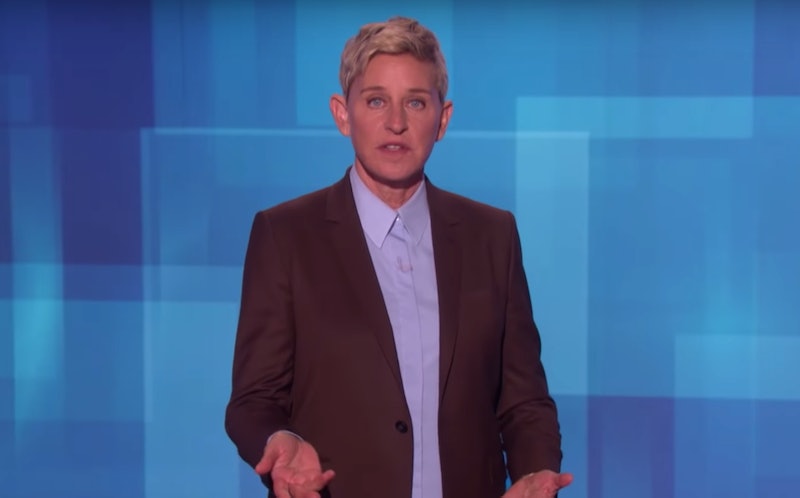 After a photo of Ellen DeGeneres sitting with former president George W. Bush at an NFL game surfaced earlier this week, the talk show host is now sharing her side of the story. On Tuesday's episode of The Ellen DeGeneres Show, DeGeneres responded to criticism about spending time with Bush, whose political beliefs largely clash with hers, by standing by their friendship. However, in doing so, she sparked even more backlash.

In the original photo that's been making the rounds online, DeGeneres and Bush are side-by-side at Sunday's football game between the Dallas Cowboys and the Green Bay Packers, appearing happily engaged in conversation. On her show, DeGeneres briefly summed up the controversy. "People were upset, they thought, 'Why is a gay, Hollywood liberal sitting next to a conservative, Republican president?'" she said before joking, "They didn't even notice that I was holding the brand new iPhone 11."

DeGeneres went to the game knowing she'd be surrounded by people with beliefs different from her own. The talk show host explained to her audience that she considers Bush a friend and believes it's possible to be friends with people who she disagrees with politically. "When I say, 'Be kind to one another,' I don't mean only the people who think the same way that you do. I mean be kind to everyone," she added.

Even after that explanation, the backlash against DeGeneres has continued. Some are upset and frustrated that DeGeneres isn't addressing the fact that Bush has backed policies that are harmful to the LGBTQ community, including in 2014 when he supported an amendment to the constitution that banned marriage equality. More recently, he supported Brett Kavanaugh's nomination to the Supreme Court, despite the sexual misconduct allegations against Kavanaugh (which he has denied).

However, there were others who appreciated DeGeneres' explanation, tweeting that they were happy to see her bridging the gap between liberals and conservatives.

Earlier this year, DeGeneres received similar backlash when Kevin Hart was a guest on her show and she gave him the opportunity to open up about his homophobic tweets from 2011 that resurfaced (which ultimately led to Hart stepping down from hosting the 2019 Oscars altogether). After his appearance, DeGeneres tweeted that she believes in Hart as well as in "second chances."

In both cases, DeGeneres showed she isn't worried about the public's perception of her based on who she spends time with or invites on her show. Instead, she'd rather encourage her fans to get along with everyone, regardless of political beliefs.