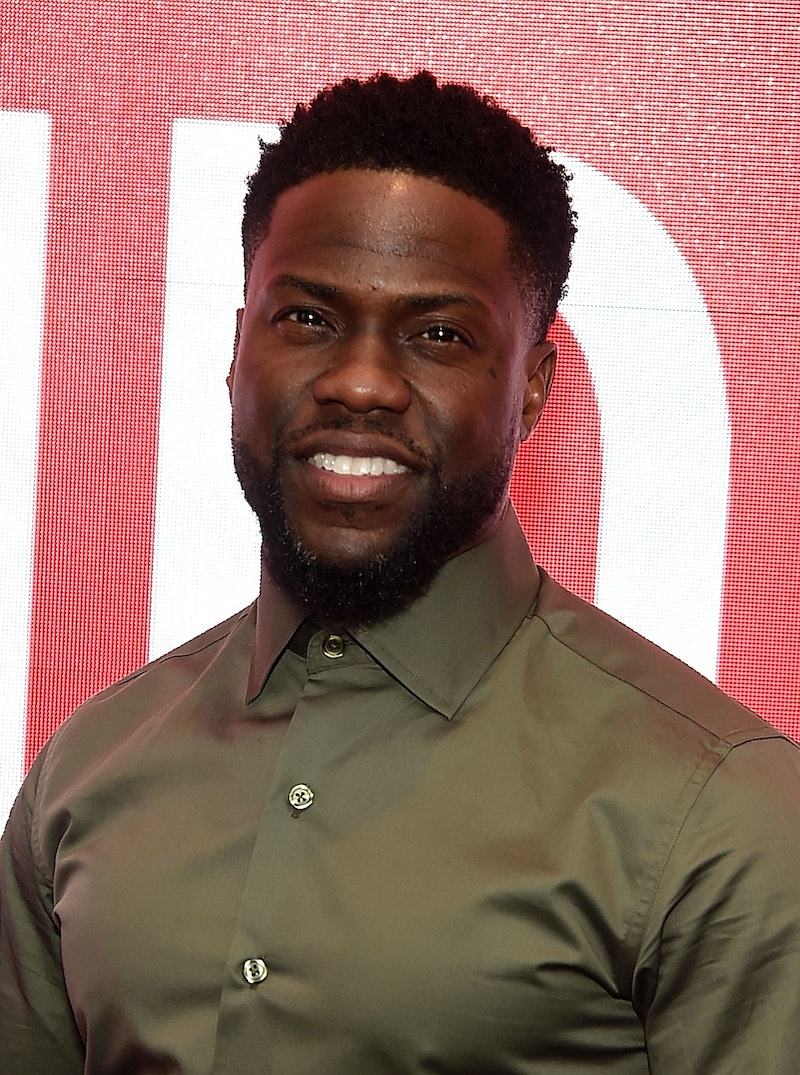 If anything other than death and taxes is guaranteed in this world, it’s that everyone is sick of talking about Kevin Hart’s Oscars controversy, except for Kevin Hart himself, apparently. The controversial comedian is releasing a new Netflix special, Irresponsible, on Tuesday, April 2, and in a new interview on Vulture’s podcast Good One, he discussed why he’s not only decided to take on the Oscars in his future stand-up acts, but he’s actually excited to talk about it.

In December of 2018, after Hart was announced as the host of the 2019 Academy Awards, many of the comedian’s disturbing tweets from 2011 resurfaced on social media, including one where he said if his son were to play with his daughter's dollhouse, Hart would "break it over his head & say n my voice 'stop that's gay.’” People found a pattern of homophobia on Hart’s Twitter feed, as noted by BuzzFeed, including multiple jokes about AIDS and use of derogatory slurs like “f*g." Another homophobic joke from his 2010 comedy special, Seriously Funny, also resurfaced. "One of my biggest fears is my son growing up and being gay," he said in the special. "That’s a fear. Keep in mind, I’m not homophobic. . . . Be happy. Do what you want to do. But me, as a heterosexual male, if I can prevent my son from being gay, I will.”

Needless to say, the old tweets and material grew a swift backlash, with people online calling on the comedian to step down mere hours after he was announced as Oscar host. Hart initially refused to apologize for his words, a task that would have likely saved his Oscars hosting gig, instead deciding to tell people not to be angry and preach about love and growth in an Instagram post. On Dec. 7, just three days after the initial Oscars announcement, Hart stepped down as host and apologized for his previous behavior, writing in part on Twitter, "I sincerely apologize to the LGBTQ community for my insensitive words from my past."

In the new interview with Good One, Hart gave his clearest apology yet and seemed to display some genuine understanding about why his old homophobic jokes were far from hilarious. “Today, I understand why people are like, ‘That’s not funny. He shouldn’t say shit like that,’” he remarked. “You’re absolutely right. I apologize for those that are offended.” Hart explained that he had consulted friends, including black gay men Lee Daniels and Don Lemon, and asked what he had done wrong in this situation, which led to illuminating conversations for both the comedian and his friends. "There's a level of understanding that has to come from everybody," he said.

Now, Hart has verbally apologized for his old statements multiple times after the initial backlash. However, in the new interview, the comedian still played the victim, saying that he was frustrated about how his growth in the years following the tweets was overlooked by the public. “I don’t want you guys to think that that’s who I am, which is why I went on this big, ten-year run of not doing that anymore,” he said, presumably referring to the fact that the homophobic material hadn't been used since 2010 and 2011. “So, it wasn’t about not being comfortable. It was about me being frustrated with the fact that the ten-year change was instantly overlooked," he said.

What Hart fails to comprehend is that people did not ignore his growth, there wasn't enough of it at the time. In a 2015 Rolling Stone interview, Hart acknowledged that the joke about his son's sexuality was born out of his own insecurities as a father, but failed to directly apologize for it. Instead, he explained that he wouldn't tell it today "because when I said it, the times weren’t as sensitive as they are now." At the time, he added, "I think we love to make big deals out of things that aren’t necessarily big deals, because we can. These things become public spectacles. So why set yourself up for failure?”

Despite Hart's words about a "ten-year change", he never directly apologized for his words until he was nearly forced to by the controversy resulting from the Oscars gig. And, though he has now apologized, he still continues to attribute the backlash to the notion that people like to be angry rather than his own wrongdoings. “Right now we live in a time where it’s cool to be angry, where it’s cool to just be irate," he said on Good One. "And what this showed me about comedy is, 'Wow, it is real easy to be insensitive onstage.'"

While Hart's genuine apologies are appreciated, he shouldn't be given a pass because of the intensity of the backlash. People had, and still have, the right to be upset over the comedian's words, and not just for the sake of being angry. When Hart learns to accept that, the world (and his career) will be much better for it.

Editor's Note: The original version of this article incorrectly stated that Hart would discuss the Oscars controversy in the Netflix special, and has been updated accordingly.