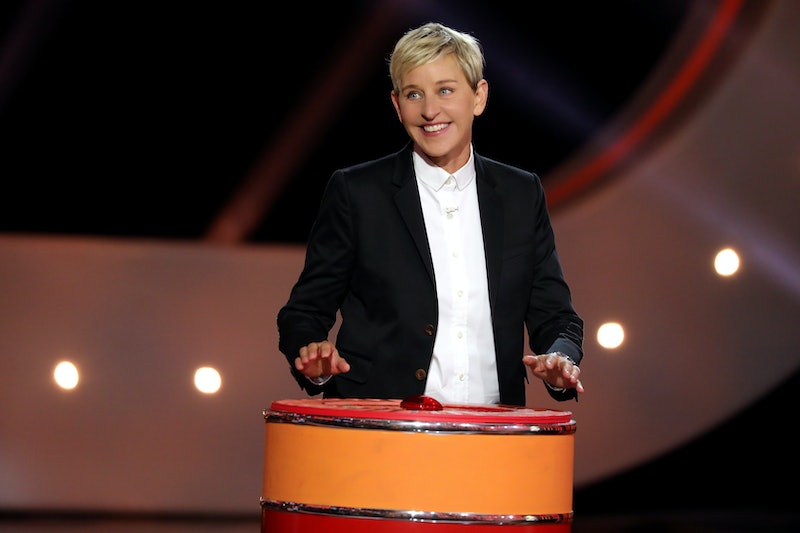 Ellen DeGeneres has never won a Golden Globe before, but she's about to be gifted with one of the biggest honors that the award show has to offer. Ellen DeGeneres will receive the Carol Burnett Award at the 2020 Golden Globe Awards, set to air on Jan. 5.

The Carol Burnett Award, created in 2018, marks the highest level of achievement in television that the Golden Globes recognizes, and is equivalent to its film counterpart, the Cecil B. DeMille Award, which will be awarded to Tom Hanks next year. Bustle has reached out to a representative of DeGeneres for comment, but has yet to hear back.

“From her sitcoms, to stand-up, to becoming a household staple on daytime television, she is a pioneer who has captivated audiences for nearly 25 years with her undeniable charm and wit," Lorenzo Soria, president of the Hollywood Foreign Press Association, said in a press release obtained by Bustle. Soria continued, praising DeGeneres as "an advocate and philanthropist."

In addition to hosting The Ellen Show, currently in its 17th season, the comedian also established the Ellen DeGeneres Wildlife Fund in 2018. The fund, which partners with the Dian Fossey Gorilla Fund, aims to support "global conservation efforts for endangered species," per their official website.

Of course, DeGeneres is best known for breaking boundaries on television. After getting her start as a standup comic in her hometown of New Orleans, she broke onto the national scene playing Ellen Morgan on the sitcom Ellen, which ran from 1994-1998. Her performance earned her three Golden Globe nominations over the course of the series. But, in 1997, the show made history and won an Emmy when both DeGeneres and her character came out as lesbian, on and off screen, in "Puppy Episode." DeGeneres received both immense praise and nearly career-destroying backlash, and she has since emerged as one of the most popular figures fighting for LGBTQ rights.

DeGeneres is only the second person ever to be recognized with the Carol Burnett Award — the first being Burnett herself, who accepted the honor in 2019. As to who will be presenting the award, that has yet to be announced.