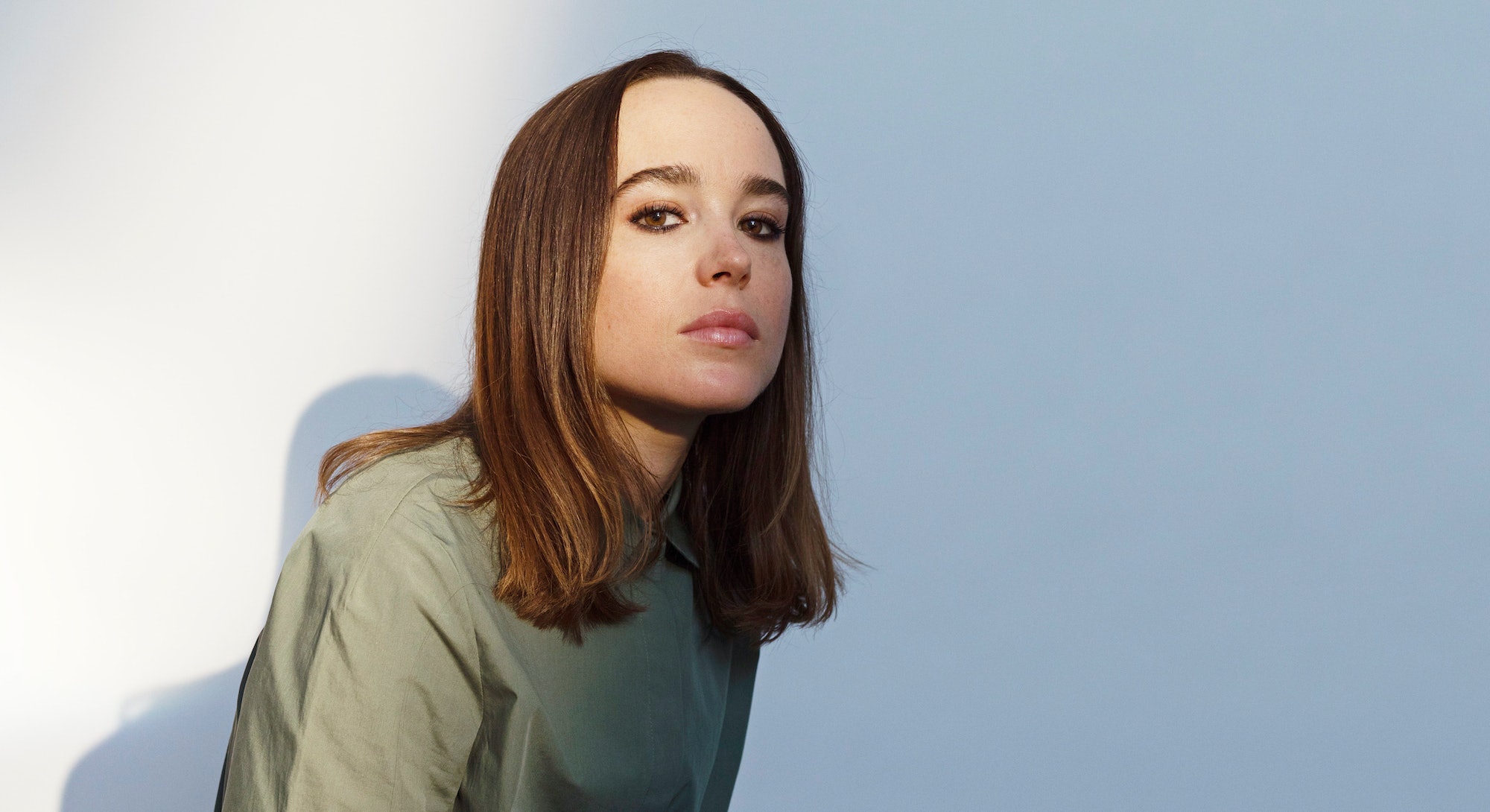 Ellen Page is sick when she visits the Bustle Office for a photoshoot and interview on a sunny Thursday morning. Unfortunately, she doesn’t remember to mention this until we’ve already shaken hands. Page's entire face falls in distress when she apologizes. “I shouldn’t have shaken your hand,” she says, putting a yard of distance between us. “I’m sorry.” She finally smiles when I assure her that it's fine, declines an offer of water, and within minutes has the studio laughing at her quiet jokes about her love for 122 degree California weather. By the time we sit down for the interview, you’d never know that the Flatliners star wasn't feeling well at all; she’s too busy dismantling the illusion of Hollywood in a few short, incisive sentences.

“There’s always that conversation that it’s changing, but sometimes I’m like 'is it?' I think Hollywood can love to think of itself as the most progressive force, but… it’s not always that way," she says matter-of-factly.

That is, in a nutshell, the Ellen Page experience. Even while coughing after every few answers, the only thing she’s sick of is the bullsh*t.

The star is barely over five feet tall, and yet what she lacks in height she more than makes up for in intelligence. And talent, of course, which Page puts on display by choosing projects that have very little in common. September 29's Flatliners remake, for instance, was chosen because she'd "felt like [it was] something new for [her] to do" and it "allowed a lot of range in terms of getting to act."

...with heterosexual actors, there’s not some big conversation about all the straight things that they’re making.

In it, the actor plays Dr. Courtney Holmes, who works alongside a group of young medical students trying to answer the eternal question of what really happens after death. But even ten years and many, many projects later, Page is still best known for playing Juno MacGuff in the Diablo Cody-penned 2007 film and, more personally, coming out as gay at the 2014 pro-LGBT conference Time to THRIVE. The latter has seemed to define her — in good ways and bad ways.

"I still get asked about it a lot, [but] I’d rather be asked about that all day long than be in the closet again," the actor says, with the caveat that she's still well aware of the kind of double standards that come along with gender politics in Hollywood. "When I see a straight, male actor getting interviewed with his director, they’re both talking about the film or their career.... where I’m talking more about my identity or politics. Which is fine. I made Gaycation. I engage with that because I want to talk about social justice. I guess because I have come out and I want to develop projects that have queer characters and storylines, people [believe] I want to make that because I’m queer. But with heterosexual actors, there’s not some big conversation about all the straight things that they’re making."

The narrow view thrust upon her feels particularly unfair when you look at her resume, which is chock full of roles that keep Page from ever being seen as typecast. She's been the snarky, politically incorrect pregnant lead of Juno and the fiercely brave and loyal mutant Kitty Pryde from X-Men; she's been the sociopathic, vengeful pedophile hunter Hayley from Hard Candy and the independent and talented architect Ariadne from Inception; she's played straight characters, LGBTQ+ characters, and characters whose sexuality played no explicit role in a film at all. Her career can't be put in a box, so why should she be put in one just for being herself?

"I understand why," she says. "Hollywood is struggling. TV has so surpassed. There’s still work to be done in every aspect of entertainment, but I’d say television is embracing new stories and perspectives more than Hollywood. They keep talking about it, but it’s like…" She trails off with a lift of her eyebrows that silently broadcasts her exasperation with this tired narrative. But she's not twiddling her thumbs and waiting patiently for Hollywood to flip the script.

I’d say television is embracing new stories and perspectives more than Hollywood. They keep talking about it, but it’s like…

"I feel like I have to generate a lot of my own projects," she says. "Just because of what I’m interested in making and because I want to make things that have roles for women that can show a wider range of what women could be, how they can look, etc." Page references Gaycation, and her film that debuted at the Toronto Film Festival in 2017, My Days of Mercy, co-starring Kate Mara. "We really wanted to work together, so we looked for a script and started developing it ourselves. You can’t really wait around for a movie that stars three women... [I'm] trying my best," she offers.

But better roles for women and LGBTQ+ representation aren't the only vacuum Page sees in Hollywood; there's very little representation for "people of color and Indigenous people." The latter she finds particularly striking because she grew up in Canada ("a country that did awful, horrible things to Indigenous people and still does") and frequently works in America ("here, there's just a denial... people are stuck in denial about a lot of things in history") where those stories just aren't being told as much as she would like. "They don’t need to all be about brutal history, by any means," she says. But Hollywood, and the world in general, needs to talk about these things, get over that denial, and offer that representation.

This viewpoint is no surprise coming from the incredibly politically active actor, who uses her Twitter to elevate the voices and causes she feels passionately about and who openly grilled Ted Cruz about his stance on LGBTQ+ rights at the Iowa State Fair in August 2015 as part of Gaycation. (And because, as she later told the New York Times in October, she'd love to "sit down [with him] and not have people around... just talk.") In the last couple of years, and especially in the era of "fake news," Page's political use of social media has only increased.

"I think it’s important to share information, of course, right now," she says, noting that supporting feminism, Black Lives Matter, and trans women of color seems to get her the most hate from trolls on Twitter. "People are obviously feeling more entitled to express themselves and safe to be, needless to say, with Charlottesville. I don’t know why those who [have] experienced the most privilege in this society get so angry when people just want to be treated equally and not suffer so much injustice."

But Page knows that she isn't perfect — and nor has her career been perfect. She has worked with both Bryan Singer and Woody Allen, two directors who have been at the center of sexual assault allegations. (Allen has denied the accusations against him, and the lawsuit against Singer was dropped.) She received backlash from conservatives over her confrontation with Ted Cruz. And even Juno, the film that launched her to superstardom, features some problematic and homophobic lines, as she acknowledges when I bring up the moment in the movie when Juno rejects Madison as a baby name because it sounds "a little gay."

"It wasn’t something I totally registered at the time, but, of course, now that I’m older I do," she says. "So many movies I loved as a kid are just rampant with homophobia and transphobia and biphobia, and I’m not excusing it by any means." And she's trying to do better. During a recent table read of the film's script for Planned Parenthood, she refused to say that joke. Her upcoming remake, Flatliners, features a diverse cast including Diego Luna and Kiersey Clemons. And My Days Of Mercy, which was co-produced by Page, centers on a romance between two women — a story that, per the 2017 GLAAD Studio Responsibility Index, is still unfortunately rare in film, where lesbian characters made up only 35 percent of the 125 films studied and released in 2016.

"I think the holdup is fear and people don’t want to take risks. They want to make money. And there’s a lack of people [of color] hired in every single aspect of the film industry," she says. "It really hurts the industry and it really hurts film. We need more stories. We need more representation. We need more points of view." But while Hollywood might take two steps forward and one step back, Page is looking to the future, one step at a time, one project after another. "I’m kind of interested in everything.... I’d love to continue to produce. I enjoy that, and I’d like to learn more about it. I’d like to keep creating something like Gaycation," she says before truly hitting the nail on the head: "I guess, just in general, [I'd like to] be able to have control."

I think the holdup is fear and people don’t want to take risks. They want to make money.

As we walk out of the studio, Page thinks back to the difference between her awareness of these issues now and when she was working on Juno. She mentions The Devil Finds Work by James Baldwin as part of her personal political awakening, though she can’t remember the exact title. “The Devil… The Devil…” she repeats, trying to recall how it ends. Only after she's gone am I reminded of a particular quote from Baldwin's book-length essay on race and American cinema: "Dreadful indeed it is to see a starving child, but the answer to that... is to restructure the world so that the child can live in it."

With people like Page behind the camera as well as in front of it, fighting for the stories and rights of those most starved for them, that restructured world might one day exist — even if just on screen.