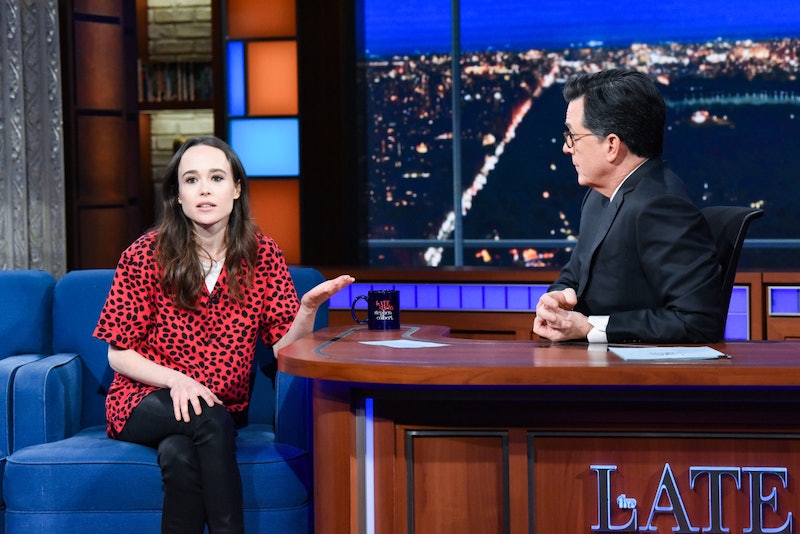 On Thursday, Jan. 31, actor Ellen Page gave a passionate speech about LGBTQA+ rights during her appearance on The Late Show With Stephen Colbert. The Umbrella Academy star talked about several topics on the show, which included global warming and the Jan. 29 attack on Empire actor Jussie Smollett in Chicago. Her mention of Smollett's brutal attack served as the prologue to her speech, which seemed to be directed at Vice President Mike Pence.

"We have a media saying it's a debate whether or not what happened to Jussie Smollett is a hate crime," she told Colbert. "It's absurd. This sh*t isn't a debate."

The audience applauded the statement and Page continued. “I’m like, really fired up right now. It feels impossible not to feel this way right now with the president and the Vice President Mike Pence, who wishes I couldn’t be married, let’s just be clear,” Page said, as the host displayed a photo of Page and her wife Emma Portner on his desk.

Pence has been known for taking several anti-LGBTQA+ stances throughout his career as Indiana's governor, prior to becoming vice president. Page passionately noted this in her speech as she continued.

“The vice president of America wishes I didn’t have the love with my wife. He wanted to ban that in Indiana, he believes in conversion therapy, he has hurt LGBTQ people so badly as the governor of Indiana," Page said on The Late Show.

In 2016, Pence's spokesperson denied that the vice president supported conversation therapy during his 2000 congressional campaign, telling the New York Times that the reports were “patently false." However, in 2016, Rea Carey, the executive director of the National LGBTQ Task Force, pointed the NY Times to the phrasing that Pence used on his 2000 campaign website about “those seeking to change their sexual behavior.” Carey told the outlet that it was “very specific language — some might call it a dog whistle — that has been used for decades to very thinly cloak deeply homophobic beliefs.”

After mentioning Pence, Page continued her speech on The Late Show and teared up. She said:

Connect the dots. This is what happens. If you are in a position of power and you hate people and you want to cause suffering to them...You go through the trouble...you spend your career trying to cause suffering. What do you think is going to happen? Kids are going to be abused, and they're going to kill themselves, and people are going to be beaten on the street. I have traveled the world and met the most marginalized people you could meet. I am lucky to have this time and the privilege to say this. This needs to f*cking stop.

Page's speech concluded to applause from the audience.

The next day on Feb. 1, many celebs tweeted support for Page's speech on The Late Show, including Mark Ruffalo, Chelsea Peretti, and The Good Place star Jameela Jamil.

Page's speech certainly struck a cord and it's definitely a must-watch.