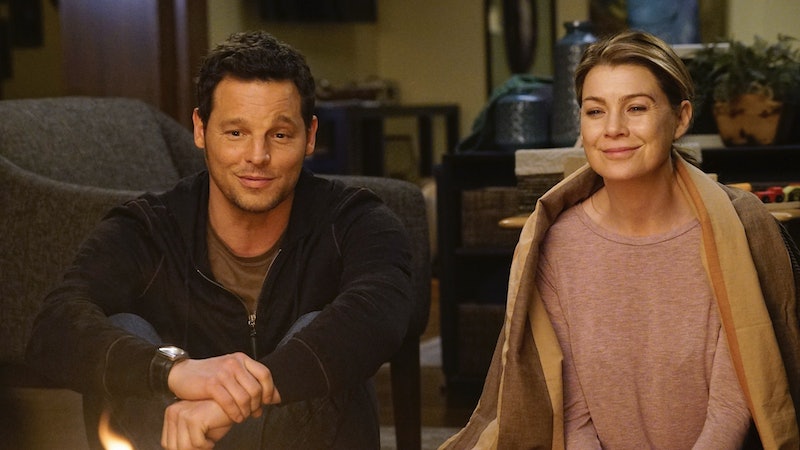 This article contains spoilers for Grey's Anatomy Season 16. Alex Karev has officially left Grey Sloan Memorial, and his "person" wants to make sure that fans are handling his departure well. Ellen Pompeo's message to Grey's Anatomy fans after Alex's exit is all about sharing her love for her former costar and the audience who have supported them both over the years. On Friday, March 6 — the day after Alex's farewell episode aired — the actor and producer shared a post on Instagram thanking the show's fans for their passion and support.

"You are truly the best most passionate most loyal fans anyone could ever ask for," Pompeo wrote, alongside a video of herself and Justin Chambers building Meredith and Alex's bond over the years. "Because of you we got to make great tv... because of you we got to make television history!" In addition to the fans, Pompeo also thanked the episode's director, Debbie Allen, and the writers, who, according to her, "gave Alex Karev the best send off," as well as creator Shonda Rhimes for "creating the most amazing character."

While she acknowledged the fact that many fans were upset with Alex's final storyline — and his decision to leave Grey Sloan and Jo (Camilla Luddington) behind to live in Kansas with Izzie (Katharine Heigl) after discovering he fathered her children — Pompeo revealed that she loved his ending. "For me personally, for Karev to go back to the beginning.... was the best possible storyline," she wrote.

For Pompeo, bringing Alex's story full circle is actually a perfect way to honor the character that Chambers brought to life for the last 15 years. "It pays homage to those incredible first years and the incredible cast ...that created a foundation so strong that the show is still standing," Pompeo explained.

As a result, she encouraged Grey's Anatomy fans to celebrate the conclusion of Alex's storyline, rather than to mourn the loss of the character. "As our fearless leader DA always says let’s PULL UP and celebrate the actors the writers and the fantastic crew who make this show come to life every week," Pompeo wrote. And all the love and support form the fans, she said, was "worth dancing it out over," instead of being sad.

And she wasn't joking about the dancing. After her emotional message about Alex's departure, Pompeo posted a video of Ariana Grande performing "Be Alright" as a message to Grey's fans, in order to remind them that it will, indeed, be alright. "Guys I wasn’t kidding.. we literally have to dance it out now," she wrote, adding that "it’s the Grey's way" to deal with any and all hardships.

After Chambers' announced his sudden decision to leave Grey's Anatomy after 15 years back in January, Pompeo shared in fans' heartbreak on social media. Responding to a post that said the show's fans were about "to feel one of its biggest losses yet," the actor wrote on Twitter that "Truer words have never been spoken," along with a string of broken heart emojis.

Even if Grey Sloan Memorial — and Grey's Anatomy as a show — will never be the same without Alex Karev, fans should at least try to follow Pompeo's lead and dance it out.

More like this
'GoT' Star Emilia Clarke Says She "Just Can't" Watch 'House Of The Dragon'
By Brad Witter
Shonda Rhimes Responded To The Surprise Exit Of A Day 1 'Grey's Anatomy' Figure
By Grace Wehniainen
'RHOP' Stars Robyn & Juan Reportedly Got Remarried & Filmed The Ceremony
By Brad Witter
'RHOSLC' Star Jen Shah Refuses To Do A Post-Sentencing Interview With Andy Cohen
By Brad Witter and Jake Viswanath
Get Even More From Bustle — Sign Up For The Newsletter
From hair trends to relationship advice, our daily newsletter has everything you need to sound like a person who’s on TikTok, even if you aren’t.