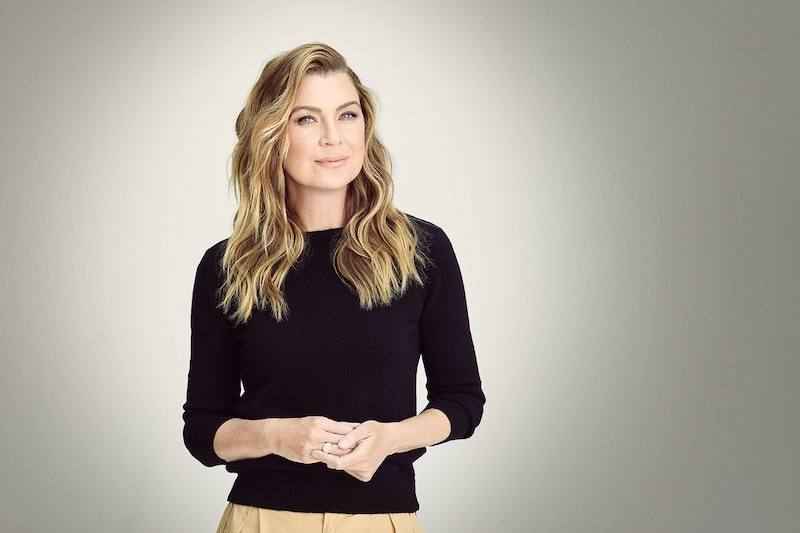 This past Thursday on Twitter, Grey's Anatomy actor Ellen Pompeo voiced support for Gabrielle Union amidst all the America's Got Talent controversy. Per Variety, multiple insiders reported that NBC's AGT fosters a "toxic work culture," and claimed that Union was allegedly terminated as a result of speaking out against "problematic situations." (Bustle has previously reached out to Union's reps as well as NBC for further comment.) In the wake of this report, Pompeo called for "unity and solidarity" among all women, and directly criticized the reported complicity of the NBC network executives.

According to sources who spoke with Variety, Union was reportedly either the subject of several instances of racism, or got in trouble for attempting to report such instances. When comedian Jay Leno reportedly made a joke on America's Got Talent that perpetuated Asian stereotypes, for example, Union reportedly urged producers to report the joke to human resources at NBC, to no avail. The sources also claimed Union's hairstyles were often reportedly critiqued for being “too Black," and that she was reportedly ignored after she requested that a "racially insensitive" costume change performer be removed from the line-up.

In response to the report, NBC producer Fremantle said that "America’s Got Talent has a long history of inclusivity and diversity" and that "NBC and the producers take any issues on set seriously.”

Pompeo saw the statement as NBC sidestepping the issue, though. In a Nov. 28 tweet, Pompeo wrote that its "unfortunate that @nbc the same network that protected disgusting men like Matt Lauer and punished women for speaking out or not putting up with it... has not changed their practices or culture."

Pompeo pointed out that every network and production has some sort of drama at some point, but it's up to the network executives to genuinely consider serious issues that are brought to their attention. Pompeo tweeted that even the Grey's Anatomy set had issues, but "the exec producers and the NETWORK @abc cared enough to help us make change support is crucial."

Back in August, Pompeo opened up to Taraji P. Henson for Variety's Actors on Actors series. "The first 10 years we had serious culture issues, very bad behavior, really toxic work environment," Pompeo revealed about the Grey's Anatomy set. "But after Season 10, we had some big shifts in front of the camera, behind the camera. It became my goal to have an experience there that I could be happy and proud about, because we had so much turmoil for 10 years."

"Patrick Dempsey left the show in Season 11, and the studio and network believed the show could not go on without the male lead," Pompeo continued. "So I had a mission to prove that it could. I was on a double mission."

In regards to the Variety report on America's Got Talent, Pompeo called it a "teaching moment" for the importance of intersectional feminism. Speaking directly to white women, Pompeo tweeted, "Whether you truly understand what racial injustice is or not..that you stand with your sisters on the front lines. Don’t cut side deals & don’t not get involved because it isn’t your issue..because it is."

Pompeo concluded by saying that "workplace cultures will continue to be toxic until there is unity and solidarity among all women."

This isn't the first time that Pompeo has spoken on issues of race. In a 2018 Red Table Talk round table, Pompeo was very clear about the importance of addressing racism. "I'm not afraid to talk about race," Pompeo said. "A lot of people get nervous when you bring it up, and I understand why they do. At the same time, these are important conversations to have. And if you're afraid to talk about them, then that's a problem."