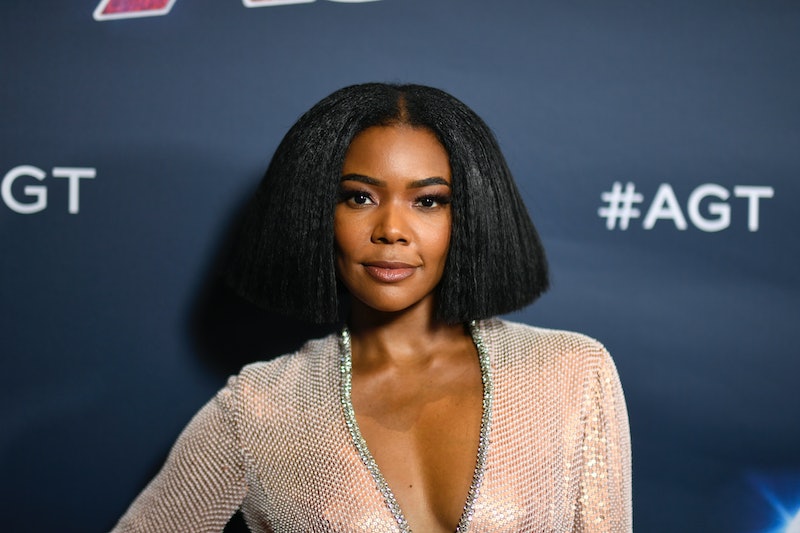 Following multiple reports that NBC fired her and fellow judge Julianne Hough from America's Got Talent, Gabrielle Union thanked fans for their support, in a Wednesday, Nov. 27, tweet. The message comes after a report claiming that Union's AGT departure stemmed from what Variety called a "toxic work environment," reportedly precipitated by a series of "offensive" incidents. NBC and AGT producer Fremantle responded to the initial report with a joint statement. "America's Got Talent has a long history of inclusivity and diversity in both our talent and the acts championed by the show," they told Variety. The statement also pointed out that judges are "regularly refreshed over the years" and insisted, "NBC and the producers take any issues on set seriously." Bustle reached out to reps for Union, Hough, and NBC regarding these reports, but has yet to receive any response.

The report of behind-the-scenes incidents at America's Got Talent went viral on Wednesday, leading many fans to take to social media to show their support for Union. And, though she has yet to address the reports directly, she seemed to respond to her fans later that night. "So many tears, so much gratitude," she tweeted. "THANK YOU! Just when you feel lost, adrift, alone... you got me up off the ground. Humbled and thankful, forever ❤️."

The outpouring of support from fans and fellow celebrities alike has continued as new claims about Union's reported firing — via anonymous sources — have emerged following Variety's report. On Nov. 27, Vulture's Yashar Ali cited multiple AGT production sources as having confirmed that Union had reportedly expressed concerns about perceived racist incidents — including a rumored joke from guest judge Jay Leno. (Bustle also reached out to representatives for Leno regarding the incident, but did not receive an immediate response.) She also reportedly complained of fellow judge and AGT producer Simon Cowell's habit of smoking indoors, and worried about the show potentially misgendering contestants.

A production source disputed these claims to Vulture, specifically refuting the idea that Union, who joined AGT in Feb. 2019, was fired for being perceived as "difficult," reportedly claiming, instead, that she was "rotated out." Since AGT premiered in 2006, past judges have included Mel B., Heidi Klum, Piers Morgan, Howard Stern, David Hasselhoff, Brandy Norwood, and Sharon Osbourne. Meanwhile, Howie Mandel and Cowell have each been at the judge's table for several years.

Union's husband, retired NBA pro Dwyane Wade, defended his wife in his own series of Nov. 27 tweets. Noting that he'd been approached by "many people" saying Union is "the main reason they've started watching" AGT, Wade wrote: "So when i got the news that my wife was being fired—my first question was obviously why!? Iam still waiting on a good answer to that question." He then seemed to allude to the reports, continuing, "But if anyone knows @itsgabrielleu or have heard of her you know she’s an advocate for our community and culture."

Wade, who appeared as a guest judge on AGT this season, added that, as proud as he was of Union for landing the gig, he's "even more proud of her standing up for what she stands for and that’s US." He concluded his tweets, praising the mother of their 12-month-old daughter Kaavia James. "So 🥂 to you @itsgabrielleu on not losing sight of the lessons we’ve talked about teaching our daughter and for kicking ass while you were on that platform," he tweeted.

Union also received plenty of support from those outside of her family circle, including Lin-Manuel Miranda and Ellen Pompeo. Even currently presidential candidate, Julián Castro weighed in, tweeting in part, "Kudos to @itsgabrielleu or having the courage to speak out."

As for the fans, many have pledged to boycott AGT when it returns in the summer. Activist April Reign, who created the #OscarsSoWhite movement in 2016 was among those to weigh in on the matter. "I need y'all to see how @itsgabrielleu stood up for her fellow employees and everyone who watched @AGT," she tweeted on Nov. 27. "She was fired for it. Based on social media she was THE MOST POPULAR JUDGE ON THE SHOW. How will they justify her termination? #BoycottAGT"

The drama may not be over, however. As Vulture reported via sources, Union is now "exploring her legal options against the network."

More like this
These 10 Wild Real Housewives Fights & Moments Are Andy Cohen’s All-Time Faves
By Grace Wehniainen
Bachelor Nation's Blake Horstmann Is Dating 'Love Is Blind' Star Giannina Gibelli
By Jake Viswanath and Radhika Menon
Kris Jenner Drunkenly Toasts Khloé Kardashian’s 38th Birthday With This Speech
By Grace Wehniainen
Which RHODubai Housewife Has The Biggest Net Worth?
By Hugh McIntyre
Get Even More From Bustle — Sign Up For The Newsletter