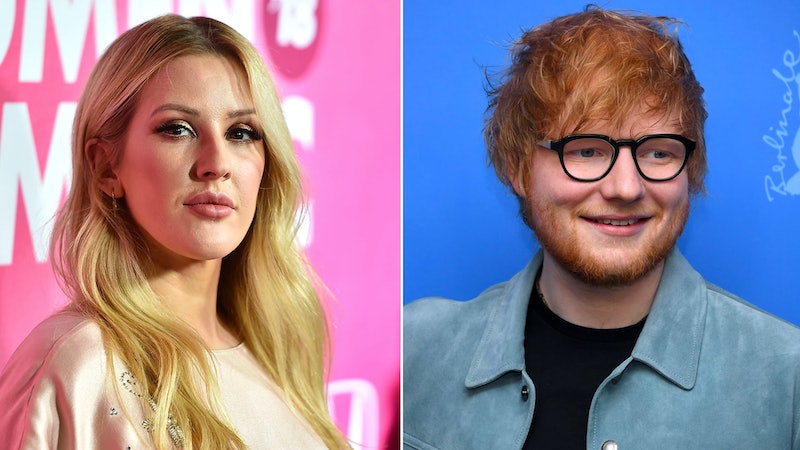 While 2018 didn't see Ellie Goulding release an album, she sure as hell made it her year. Even though the singer didn't drop a ton of new music, she did feature on Sean Paul's summer EP and collaborated with Diplo and Swae Lee for the autumn bop 'Close To Me'. Combine that with the news that she is set to release a fourth record this year, it's no surprise the singer is already making the press rounds. But with that comes the inevitable queries about her personal life, including Ellie Goulding's relationship with Ed Sheeran.

If you're not up to speed with the alleged past drama between the two singers, here's a quick recap. From what I can gather, it all started at the MTV Video Music Awards in 2013, where Sheeran and Goulding were seen holding hands during the ceremony. Sheeran somewhat confirmed that they were in a relationship after an interview with radio station Click 98.9, where the singer said: "I mean, normal people don't hold hands if they're just friends. It was going on. And now it's not."

However, it seemed as though Goulding thought the opposite, as she tweeted: "I love that holding hands with my friends means we're an item. In that case I am in many relationships. Lover not a hater." Conflicting views aside, the press seemed to believe they were in a relationship, that Goulding then reportedly cheated on Sheeran with Niall Horan, and then Sheeran wrote the song "Don't" as a response. Yeah, I'm as confused as you are.

But back in 2016 Goulding completely shut down the romance rumours in an interview with Seventeen. "We've known each other for a few years," the singer told the magazine. "I think he's a really nice guy and a brilliant musician. We've bumped into each other and we've hung out and stuff, but the thing is if I hang out with someone, it's instantly like I'm 'dating' them. We were never in a relationship. My song ['On My Mind'] is not about him."

Sheeran also seemed to shut down the rumours in 2015, where he told Entertainment Weekly that "Don't" wasn't about Goulding cheating on him with Horan. "I never let it slip. What happened was one of the newspapers in England just printed that it was confirmed when it was never was," he explained. "We got in touch, and they took the story down. But obviously the damage had already been done by that point because every other newspaper picked up on it."

Right, back to the present. In a recent interview with The Guardian, the subject of this rumoured romance was brought up again after Goulding explained how someone "tried to write a song to damage" her reputation, and how she found it "really baffling, and just sad, that something [she'd] built entirely by [herself], [her] career, was somehow at risk."

When asked whether she was referring to Sheeran (and his song 'Don't), Goulding replied:

"Er ... not specifically. [Sighs] There was a period where I felt someone was trying to sabotage me. So there are probably small pieces of the songs that relate to things that frustrate me, and things are happening in the world, but I've always been conscious that I want to keep songwriting as an escape."

Basically, "Don't" isn't about Goulding, and the songs on her new record aren't about Sheeran because, y'know, they weren't in a relationship. At least that's what I think. Either way, I hope that with the release of her new record, the focus will be on the music rather than her personal life for once — Goulding most certainly deserves it.