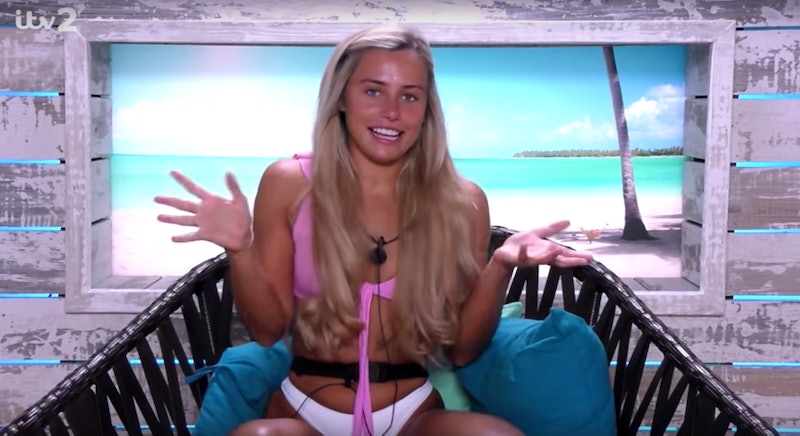 The Love Island contestants rarely have meals on camera so you wouldn't think that they'd have much chance to get into much food-related bother would you? Well, you'd be wrong. Recent Love Island arrival Ellie Brown has managed to annoy viewers by eating too loudly. Confused? Yes, me too. Ellie was shown enjoying breakfast in the garden with partner Alex during Sunday night's show, and by the time that short section of the episode was over there were plenty of tweets about Ellie on Love Island and her eating and chewing technique.

Now for some people, the chomping and lip-smacking sounds really are a genuine issue. A phenomenon known as misophonia, which is a fear or hatred of certain sounds usually associated with the mouth, can be a real problem. Some Twitter users have highlighted the condition in relation to the kissing sounds on the show, but when you read the below tweets about Ellie, the comments appear to be driven largely by old-fashioned misogyny.

Also, a lot of the criticism about Ellie's eating has been that she's talking while doing it. And I really sympathise with that predicament, she's on camera trying to talk to a date and eat. Who among us hasn't been forced to chat while eating during a meal with friends or family just out of pure necessity? I mean yes, you can always chew at the speed of lightning and swallow down a big gulp of half-eaten grub right after someone asks you a question, but I'm sure if Ellie had done that, there would be just as much criticism of her "weird" chewing. Also Ellie is well aware she's a noisy chewer, she said it during her entrance interview. I'm guessing she doesn't find it that big of a deal, so maybe we should all calm down about it too.

I can't help thinking this obsession with Ellie's manners taps into the ridiculous level of scrutiny we place around women's eating habits. Where was this outcry when Jack emptied a packet of crisps directly into his gob the other evening? Or when Wes was wandering around chomping on multiple ice lollies while discussing who was or wasn't in the newly-created Do Bits Society? All the people seemed to care about were his sensitive teeth.

It might seem lighthearted to mock Ellie's "bad" manners but it's worth remembering that expecting better manners of women than we do of men is a sexist double standard. It plays into centuries-old ideas that women should be "ladylike" while men can behave however they like. It's these same pressures and expectations that mean when a man sleeps with lots of women he's a "lad" and when a girl sleeps with lots of men, she's a well, you know what. How about we judge men and women's behaviour in the same way? That means if the boys are "bad" mannered we call them out on it too or we cut the girls just as much slack as we do the boys.

We also know that Love Island's representation of different body types is severely lacking, and its emphasis on slim, plucked, Western standards of beauty is pretty exclusionary. To be honest, I'm just pleased to see one of the islanders enjoying their food, a la Montana Brown last year, because that's way more like what my average holiday looks like. As one fan of the show, Michelle Dore, tweeted "Love Island is so unrealistic. Who goes to Spain and doesn't lie round the pool eating a giant bag of Lays the whole time?" And if a healthy attitude to food on my telly means a few more lip-smacking sounds to go with it, I'll take it. I mean that's what the volume down button was designed for after all.