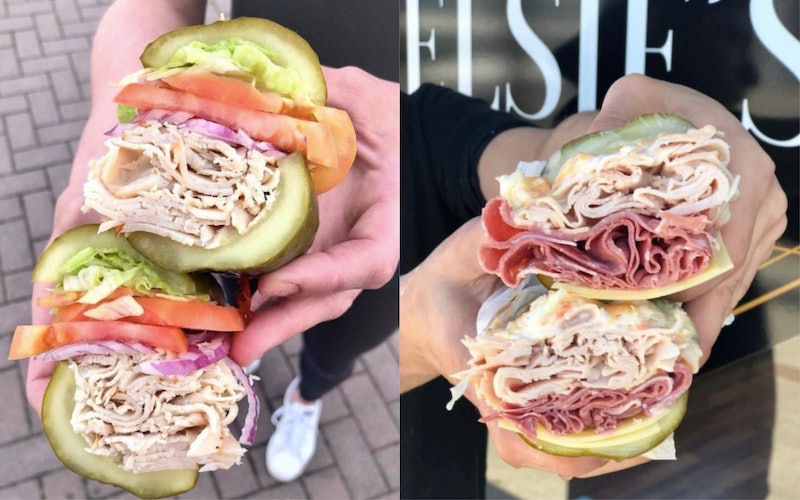 There are two major food groups whose power is too mighty for humans to fully behold — I'm talking, of course, about pickles and bread. For years, the two of them have peacefully coexisted — putting pickles in your burgers, or deep-frying your pickles with breaded outsides — but today, my friends, is the day pickles declared war. Now that a restaurant is using pickles as the bread for its sandwiches, the food kingdom is at odds with itself, and your lunch staple will never be the same.

Before you choose a side in the war of Pickles Versus Bread, here's the situation: as reported by Cosmopolitan, a restaurant called Elsie's in Haddon Township, New Jersey has declared its intentions to swap out its breaded sandwiches with pickles — which is why your eyes are about to behold the glory of what a giant pickle looks like when it is strategically stuffed to the gills with deli meat. (What a time to be alive.) Elsie's calls the gargantuan green creation Elsie's Signature Pickle Sandwich. It involves an enormous kosher pickle — you can get it in Original or Spicy — that is split down the middle, and then filled with meats like corned beef, roast beef, turkey breast, domestic ham, and salami; cheeses that include swiss, provolone, and American; and even the options of crushed chips (hello), Sriracha mayo (HI), and wasabi mayo (GOOD DAY!!!!).

DO YOU SEE THAT JUICY GOODNESS? BREAD IS SHAKING.

"Home Of The Original Pickle Sandwich!" Elsie's website declares. "Often imitated but never duplicated. Our pickles have been made with the same family recipe for many years using only fresh ingredients and peppered with more than a little love."

If you want to watch the magic happen, Thrillist Travel released a video that documents the creation of these pickle sandwiches — so now you can be as mesmerized as the hero who commented "Send my pregnant ass some of that right now".

In addition to the pickle sandwiches, Elsie's offers roll-ups made both with pickles and cucumbers; you have essentially the same options as the sandwich, but they're rolled and cut up like little pickle sushis, making them ideal options for catering for an office party (cough, cough, Bustle powers that be) or snacking on-the-go. It may not be as big of a Mood as holding a mighty pickle sandwich in your claw, but it is still peak Instagram, and as we all know, all things made of pickles are good things.

Anyway, fear not, bread fans; bread already got its revenge and then some with the Panera Double Bread Bowl (and, like, the bajillion other sandwich places in existence that are definitely using bread). In the meantime, if you want to try Elsie's otherworldly pickle creations, head to New Jersey — while I acknowledge you could recreate a version of it at home, I doubt it would the same without Elsie's iconic pickle, which is, Elsie's claims, "DILL-icious."