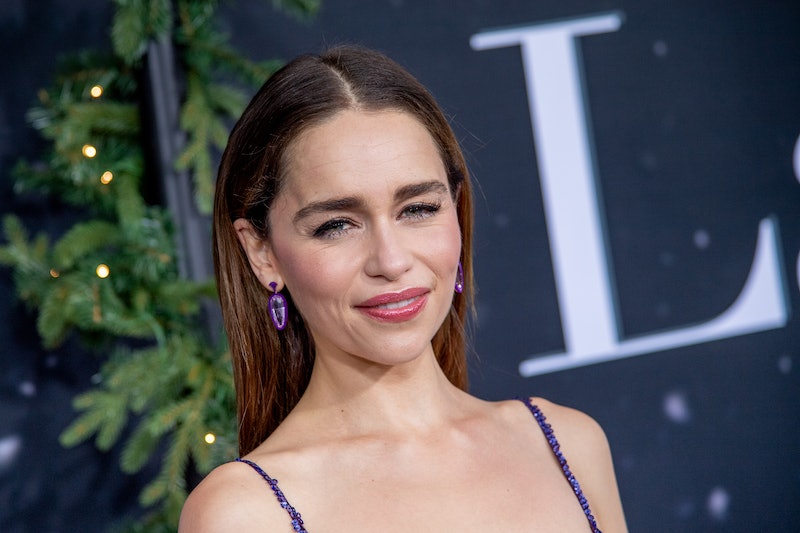 During the show's 8 season run, there was a great deal of discussion about the amount of nudity on Game of Thrones, but now that it's over, one of the stars is starting an even more important conversation about the impact of those nude scenes. During a recent appearance on the Armchair Expert podcast, Emilia Clarke revealed that people have tried to pressure her to do nude scenes using her past work on GoT.

Clarke was talking with Dax Shepard on the Nov. 18 episode of his podcast about learning how to find her voice on set when she revealed that some people have attempted to use her nude scenes on Game of Thrones to convince her to strip down on set. "I’ve had fights on set before where I’m like, 'No, the sheet stays up,'" Clarke recalled, "And they’re like, 'You don’t wanna disappoint your Game of Thrones fans.' And I’m like, 'F*ck you.'"

The Last Christmas star credited her Season 1 love interest, Jason Momoa, with helping her become much "savvier" about expressing her boundaries on set. "I’ve never been on a film set like this before, I’d been on a film set twice before then, and I’m now on a film set completely naked with all of these people, and I don’t know what I’m meant to do." Clarke recalled about the early days of playing Dany. "Regardless of there being nudity or not, [without Momoa] I would have spent that first season thinking I’m not worthy of requiring anything; I’m not worthy of needing anything at all."

The actor has often defended Thrones' frequent female nudity — which has been criticized for being "gratuitous" — and her decision to appear naked onscreen in the first half of the series. In 2015, Clarke wrote on Instagram that "if a nude scene forwards a story or is shot in a way that adds insight into characters, I’m perfectly fine with it. Sometimes explicit scenes are required and make sense for the characters/story, as they do in Westeros." However, she noted that she's not afraid to speak up if she doesn't think nudity is necessary. "In either case," she wrote, "like a good Mother of Dragons, I’m always in control."

In recent years, though, Clarke has explained that she's annoyed by the never-ending discussions about Thrones' nudity and sex scenes, even admitting in a May interview with The Hollywood Reporter that she turned down the role of Anastasia Steele in Fifty Shades of Grey to avoid even more questions about her onscreen nudity.

"The last time that I was naked on camera ... was a long time ago, and yet it is the only question that I ever get asked because I am a woman," she said during an Emmy Awards Roundtable. "And it’s annoying as hell and I’m sick and tired of it because I did it for the character — I didn’t do it so some guy could check out my t*ts, for God’s sake." Clarke continued, adding, "I did a minimal amount and I’m pigeonholed for life."

Just because Clarke made the decision to do nudity for the sake of telling Daenerys' story in the most honest way possible, that doesn't mean that she should be expected to take her clothes off in any future projects. Furthermore, to use her past nudity as an excuse to try and push and violate her boundaries is upsetting and offensive.

Game of Thrones is officially over, and Clarke should finally be allowed to move on from her old nude scenes and focus on new projects, new challenges, and finally be asked new questions.