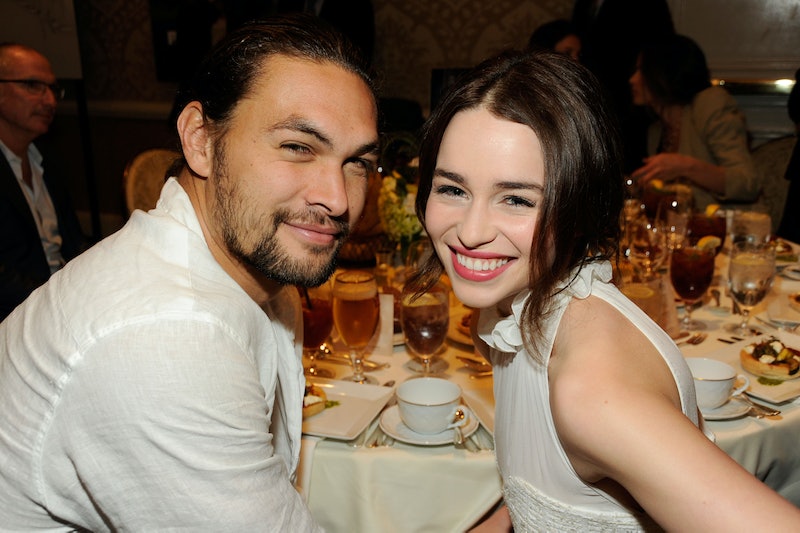 Game of Thrones may be over, but the cast friendships are forever. On Saturday, July 27, Emilia Clarke posted a birthday message for Jason Momoa on Instagram, and the reunion shows these two former costars are still so close. Clarke posted a picture of herself hugging Momoa, followed by a second photo of her posing in a enormous marble bathtub so large it made the Dragon Queen look very small. The Aquaman star appeared to be getting a head start on his birthday celebrations with friends and family. Momoa will turn 40 on Aug. 1, as per Just Jared.

In addition to the cute photos, Clarke included a special message for her long-time friend. The star wrote that she was grateful for Momoa's presence in her life, and joked that both the actor and hotel tub made her feel pretty tiny. She wrote:

"With you I feel 2 feet small. X 2 @prideofgypsies HAPPY FREAKING BIRTHDAY BABY! An oversized bath tub of happiness for another year of you. #moonofmylifemysunandstars #finallyabathbigenoughtobathadragonin #thenbrokecosispentallmymoneyonbubblebath"

The star also included a heart, dragon, and crying laughing emoji. Momoa, who played Khal Drogo on Game of Thrones, and Clarke, who starred as Daenerys, first met on set when the show began filming, which was in 2009, as per Rolling Stone. Momoa was only in the first season, but it's clear that these stars are still so close.

Fans and friends also commented on the post to wish Momoa well, and to admire the comically large tub. Zachary Levi wrote, "Happy happy!!!!" with the prayer hands emoji. Drake also commented on the Instagram, writing, "Rosewood," which may be a reference to the resort where the two actors appeared to be celebrating.

Momoa's birthday is not the first time Clarke has shown appreciation for her costar on social media. In June, she shared a silly photo with Momoa posing on the Iron Throne on Instagram, writing, "FYI...This is the closest you’ll ever get to me attempting 'that lift' from dirty dancing. Yes, my man is sitting. Yes, there's no lake. And yes, I have no idea I'm NOT being raised above his head."

On May 8, Clarke posted another photo with Momoa and Peter Dinklage from the Game of Thrones set on Instagram. In the caption, she wrote, "@prideofgypsises you so fire you make my hair turn blue."

Back in November of 2017, Clarke posted a reunion photo with Momoa in London on Instagram, writing how special their friendship is. The caption read: "When life is so good that your sun and stars is in your city...you lose your eyes and gain 5 grins (and gins) where until now they'd only been one... (*grins- there's always more gins) @prideofgypsies YOU ALWAYS MOTHER OF DRAGONS MAIN MAN #lookoutjonsnownowdrogosgotyournumber #happinessishere #hawaiihakahunoffunshutsdownlondon."

Momoa commented on the photo as well, writing, "You are and will always be the Moon of my life. What an epic night I miss you always Aloha Drogo."

Clarke's post for Momoa's 40th birthday shows that these two actors will always be each other's sun and stars even though they're not in Westeros anymore.