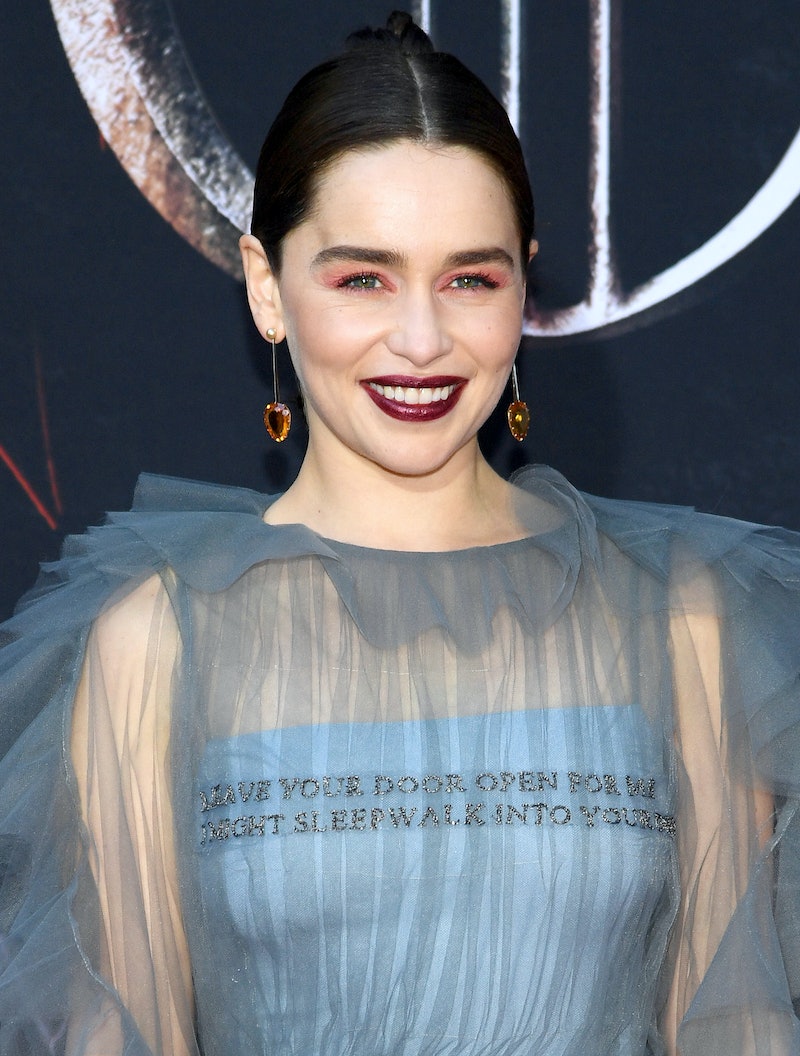 The final season of Game of Thrones premieres soon, and one star is opening up about her life off-screen. Emilia Clarke shared photos from her brain aneurysm recovery recently, and discussed what it's like to survive this type of extreme medical emergency. On Sunday, CBS News sat down with Clarke to discuss filming the last episodes of the popular HBO series. The interview was also an opportunity to open up about her health struggles behind-the-scenes, including the two aneurysms and the subsequent surgeries she dealt with over the course of filming. The first occurred in 2011, just after filming the first season of Game of Thrones, and the second in 2013, when a smaller growth in her brain became a health risk.

During the CBS interview, Clarke described the first hemorrhagic stroke, which occurred without warning during a workout. "The most excruciating pain, like an elastic band just went snap," she said. "Very quickly I realized I couldn't stand, and I couldn't walk, and in that moment I realized I was brain damaged." A week after, doctors discovered another damaged blood vessel which had issues while in operation. She said,

"If a part of your brain doesn't get blood to it for a minute, it will no longer work. It's like you short circuit. So I had that, and they didn't know what it was. The doctors were literally looking at my brain like we think it could be her concentration, it could be her peripheral vision. I always say it's my taste in men."

Even though she was able to joke about the surgery now, the star emphasized that recovery period after the second operation was traumatic. "I found it much harder to stay optimistic," she said. "I definitely went through a period of being down, putting it mildly." She also included several photos from both stays in the hospital to demonstrate the realities of the health scare.

The CBS interview isn't the first time Clarke opened up about her experience with aneurysms and stroke to raise awareness for brain injury survivors. In March, Clarke penned an essay about her brain aneurysms for The New Yorker. "After keeping quiet all these years, I’m telling you the truth in full. Please believe me: I know that I am hardly unique, hardly alone," she wrote. "Countless people have suffered far worse, and with nothing like the care I was so lucky to receive."

Clarke revealed her medical history to use her platform to help other young survivors. The actor recently founded charity called SameYou, which aims to increase access to neurological rehabilitation for the millions who need it, according to the organization's website. The actor is also an ambassador for the Royal College of Nursing and Nursing Now, an organization committed to raising the profile and status of nurses, according to Harper's Bazaar.

After years of playing a powerful Khaleesi on Game of Thrones, Clarke revealed that she's had to have a great deal of strength off screen as well. Her story will definitely resonate with fans, and bring new awareness to the need for neurological treatments for stroke and brain injury patients.