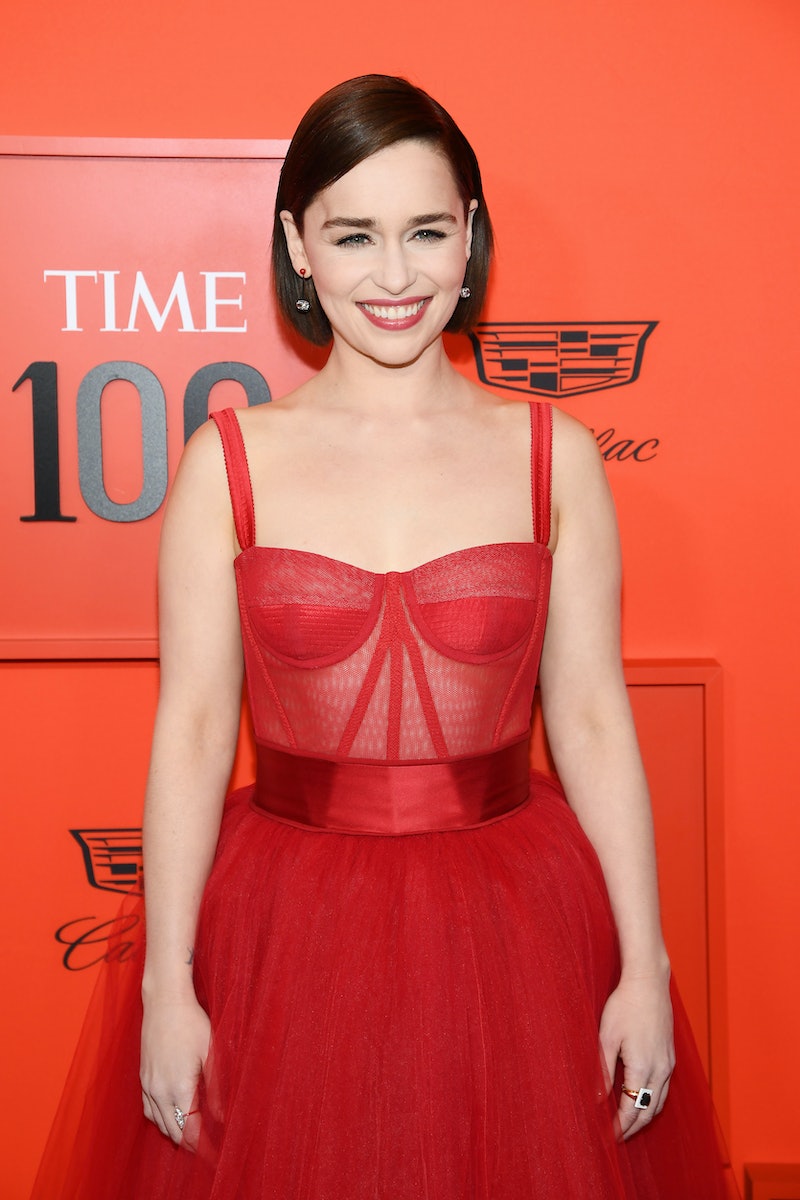 Even Daenerys Targaryen, the Mother of Dragons, gets nervous around Queen Bey. During a Jimmy Kimmel Live! appearance on Wednesday, Emilia Clarke opened up about meeting Beyoncé and her story will seriously make you laugh so hard. If you think the Game of Thrones star wouldn't be nervous around a fellow talented and successful artist, well, you're wrong. Clarke admitted she "ruined" her first, and hopefully not last, meeting with Bey.

As you can watch below (around the 2:05 mark), Jimmy Kimmel asked the HBO actor if she's ever met anyone else who is famous that made her really excited. Her answer? "Beyoncé." Immediately after uttering the singer's name, Clarke cringed so hard and then went into telling her extremely awkward tale of meeting the Homecoming star at the singer and Jay-Z's 2019 Oscar's afterparty. Clarke hilariously recalled,

"She voluntarily came up to me, open-faced, like, 'I want to talk to this girl.' And I just messed it up. She was clearly a fan and I ruined it."

According to the GoT actor, she messed it all up by not being able to speak and only having a noise come out of her mouth. Clarke also said she "started crying." She continued telling Kimmel that she felt like the singer was thinking, "Hey, this is uncomfortable now. I thought you'd be cool, you're not cool, bye!"

Clarke revealed that Jay-Z also experienced the entire ordeal. "He was like, 'Sup?'" she said, before later adding, "He witnessed it all." She didn't run into them again that same evening, but the Solo: A Star Wars Story actor would really like another chance to meet Beyoncé. She told Kimmel,

"I love her. I absolutely love her. It breaks my heart how much I messed it up."

Kimmel and Clarke also reflected on Bey's force and power as an artist. "Beyoncé is really probably the closest thing we have to a Khaleesi here in the world, really," he said. Clarke agreed by stating, "100 percent. Absolutely."

As embarrassing as Clarke's story is, she's not the only celebrity who completely flubbed their interaction with Queen Bey. Last January, Chrissy Teigen talked about meeting Beyoncé for the first time at the the 2018 Grammy Awards. While on The Tonight Show Starring Jimmy Fallon, the cookbook author admitted that she took both of Bey's hands, got down on her knees, and said, "Sorry to bother you, my queen."

It sure sounds like Teigen's encounter was way more embarrassing than Clarke's. Either way, it's understandable why they reacted the way that they did. As the Cravings: Hungry For More author explained to Fallon, "There's nobody like seeing Beyoncé in person. It's just so incredible. The aura that comes around her. I mean, she just emits this aura that's spectacular."

And that is exactly why a true fan would lose the ability to speak and/or literally bow down to the singer like she's part of the British royal family. Who knows if Clarke will get another chance to meet Beyoncé, but let's hope she does, becuase she definitely deserves it and you know she'll totally crush it the second time around.