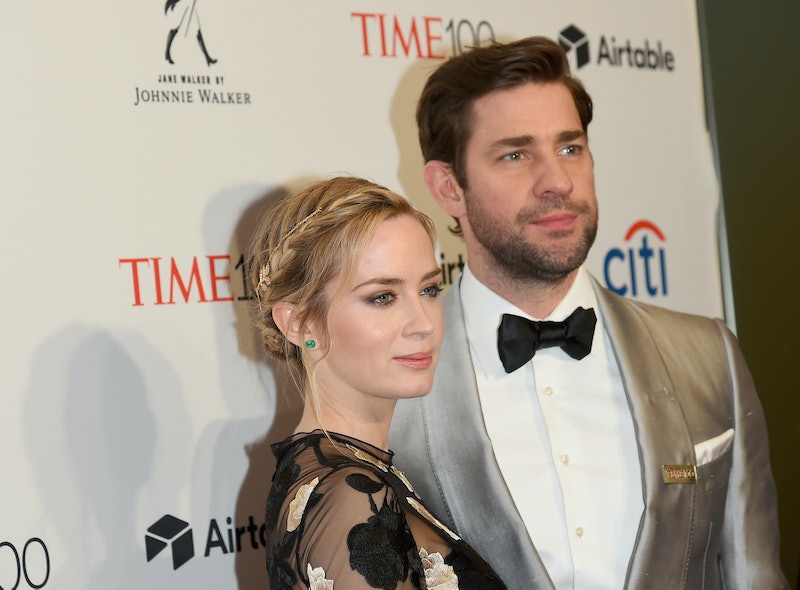 In terms of celebrity relationships, the press tends to highlight the bad over the good. Whether it's an argument in public, reports of infidelity, rumors of a split, or just generally negative assumptions and observations, the happily-ever-after stories are few and far between. Emily Blunt and John Krasinski's comments about marriage in a new joint interview with The Hollywood Reporter, however, shed some much-needed light on the good. Their relationship works because of their shared profession, not in spite of it, and they truly seem like a match made in Hollywood heaven.

From the outside, Blunt and Krasinski appear to be "practically perfect in every way," as Mary Poppins would say. And as it turns out, they appear pretty perfect from the inside, too. The couple spoke to THR about working together on A Quiet Place, and why Blunt ended up breaking one of her own professional rules to do so.

Blunt was about to begin filming Mary Poppins Returns when she decided to take the part of Evelyn, the wife of Krasinski's Lee in A Quiet Place. "I went sort of gray," she said of her reaction to reading the script. "I couldn't imagine the thought of letting someone else play the part."

She broke her own rule to do so, though. "I have a minimum of a five-month rule between projects, other than A Quiet Place," Blunt told THR. It doesn't seem as if Krasinski's multi-hat involvement in the film — he wrote, directed, and acted in it — never gave her a moment of pause either.

The couple's shared profession has only impacted their relationship in a positive way, they told the publication. Krasinski explained,

"There's a large fraction of stress that is taken out by someone who's so supportive. Meaning, 'You are directing this movie, so when you reach for your phone, I know you're not trying to isolate me as your wife. You actually have something to do.' I don't have any of that pressure of, 15 percent of my day is explaining to my wife that I have a job to do."

Blunt echoed her husband's sentiments, adding, "We've always allowed and rejoiced in each other having a very full life outside of the other one."

Rob Marshall, who directed Blunt in Mary Poppins Returns, observed the couple's inherently-shared life vision firsthand. "Neither of them has a jealous bone in their body," he told THR. "People think marriage is looking deep into each other's eyes. No, it's looking out and seeing the same life. Emily and John see the same life."

One of Blunt and Krasinski's close friends — his name is Chris Pratt, perhaps you've heard of him? — sang their praises as well, describing them to THR as "down-to-earth ... both really fun and funny." Pratt continued, "They're caring and kind. They're always doing bits and making themselves and other people laugh."

Blunt and Krasinski appear to have it all figured out. And if their successful relationship is any indication, it seems as if a spoonful of sugar — er, support — clearly makes the medicine — er, marriage — go down in the most delightful way.