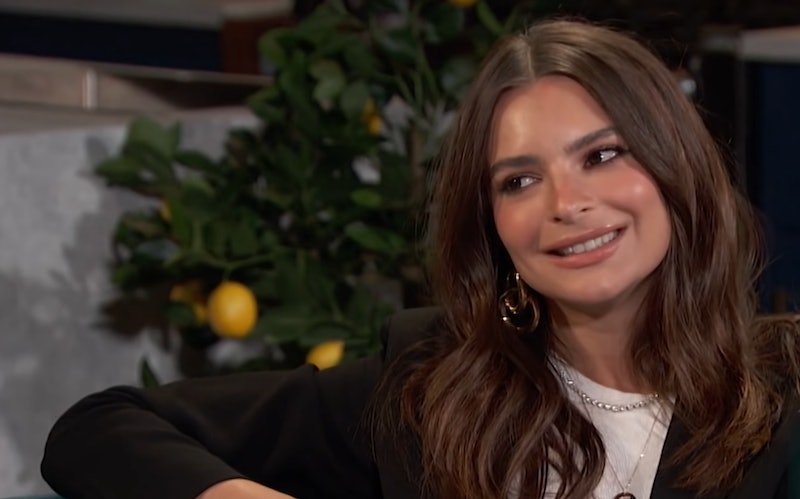 Busy Philipps really knows how to get the goods out of her girlfriends. On her new, late-night talk show, Busy Tonight, Philipps pressed model Emily Ratajkowski for details about her secret wedding back in February. But guess what? Her courthouse wedding to Sebastian Bear-McClard wasn't actually even a secret at all. Well, not for long, anyway.

After flashing a super cute photo of the couple from Instagram up on the big screen, debating how long the "newlywed" period lasts, and touching on the key to a lasting marriage, Philipps excitedly asked Ratajkowski, "But wait — you had a secret wedding?"

During Wednesday night's episode, the model paused for a brief moment before saying, "I mean, yes, it was secret for four hours." Whoops. Wonder who let the cat out of that bag? "Weddings are amazing," she continued, "I wanna party, I wanna celebrate love and relationships, but this was just for us and it was very nice."

Their nuptials came as kind of a shock to fans, based on the fact that it appeared as if Ratajkowski and Bear-McClard had only been dating for a few weeks. Turns out, the couple had known each other for quite some time — they just waited a while before becoming romantic.

"Now ... you guys didn't date very long?" Philipps asked. "No, we knew each other for a long time before," Ratajkowski revealed, "and [Bear-McClard] likes to joke like, 'Yeah, everyone thinks we got married really quickly, but you vetted me for two years.'"

The host then asked, "Was he like, a friend, and then one day you were like, 'I see something more.' Like, things developed, right?" Actually, according to Ratajkowski, that was not the case.

"Women always know, come on — what?" she admitted. "I'm like, who all the sudden changes the way they look at someone. No, I was always like 'OK, I probably shouldn’t hang out with that guy alone.'"

Philipps, appearing both surprised and intrigued, replied, "Ohh," as the crowd laughed at her reaction. "And then you did," she continued, "and fireworks!" Ratajkowski nodded and added, "Yeah, and then next thing you know I’m at the courthouse getting married." Ahh, love. What a beautiful, spur-of-the-moment thing it can sometimes be.

It's not really clear how or when Ratajkowski and Bear-McClard — a Hollywood producer and actor — first met, but Page Six first spotted them out together as a couple on Valentine's Day this year. Flash-forward a whopping nine days later, and — surprise — they were officially husband and wife.

Shortly thereafter, during an appearance on The Tonight Show Starring Jimmy Fallon, Ratajkowski confessed that Bear-McClard's proposal was a tad ... let's say, unconventional. "He proposed to me at Minetta Tavern [in New York City], and he didn’t have a ring so I was like, 'mmm, nah,'" she told the host. "And then he took the paper clip that the bill was paid with and made me a ring, which I actually thought was really romantic."

More like this
17 Creative Bridal Shower Gift Ideas For Any Type Of Bride
By Marilyn La Jeunesse
Revisit 1992’s 'A League Of Their Own Cast' Photos After The New TV Series
By Grace Wehniainen
'Indian Matchmaking's Arshneel Is Keeping His Potential Courtship With Rinkle Private
By Radhika Menon
Ellen DeGeneres, James Tupper, & More Celebs React To Anne Heche’s Death
By Brad Witter
Get Even More From Bustle — Sign Up For The Newsletter