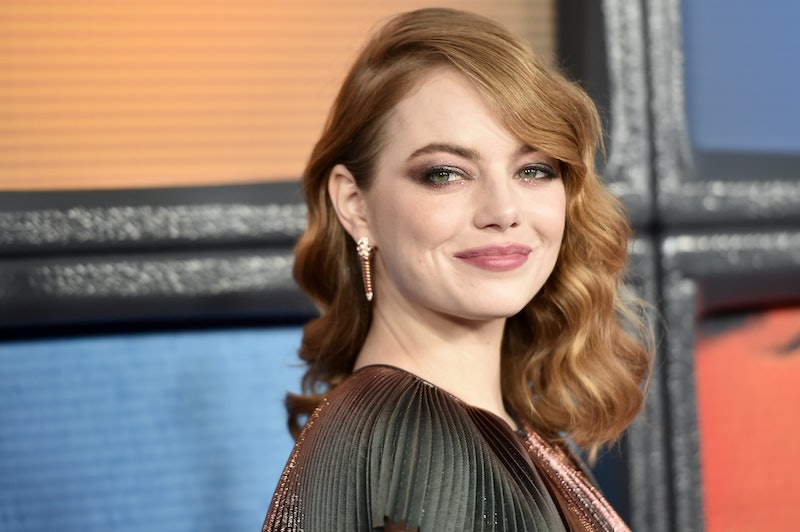 In a super honest conversation, Emma Stone recently discussed a personal issue that she's had to deal with for many years. As E! News reported, Emma Stone opened up about her anxiety and how it's been a part of her life since she was 7 years old. During the interview, she also rightly noted just how important it is to have open and honest conversations around mental health.

Stone spoke with Dr. Harold S. Koplewicz for the Child Mind Institute on Oct. 1, where she revealed exactly when her struggle with anxiety began. "After first grade before I went into second grade, I had my first panic attack. It was really, really terrifying and overwhelming," the 29-year-old said, "I was at a friend's house, and all of a sudden I was convinced the house was on fire and it was burning down... obviously the house wasn't on fire, but there was nothing in me that didn't think we were going to die."

The La La Land actor revealed that her struggle with anxiety continued throughout her time at school. As she went on to note, it even affected her social life as well, as she didn't feel comfortable staying away from her mom. "I couldn't go to friends' houses," she said, and continued, with a laugh as she mentioned that her mother was in the audience, "As you can see, it's gotten better. I swear!"

At the time, Stone was diagnosed with generalized anxiety and panic disorder, even though she wasn't aware of that fact then. She continued to explain that she was actually glad she didn't know about her disorder then, because she didn't want anything to get in the way of her achieving her goal of becoming an actor. The star said, "I wanted to be an actor and there weren't a lot of actors who spoke about having panic attacks." Now, of course, that dialogue has changed and more and more actors have come forward to open up about their own struggles with anxiety, just as Stone has.

Prior to her conversation with Dr. Koplewicz, Stone opened up about her anxiety in an interview with Elle in August, which was conducted by Jennifer Lawrence. When Lawrence asked her whether there was a time when she felt very anxious, the Maniac star revealed that she felt that way when she was 7. Similar to her most recent interview, she said she started having panic attacks at that age.

However, she's choosing to look on the positive side when it comes to her anxiety. "My mom always says that I was born with my nerves outside of my body. But I’m lucky for the anxiety, because it also makes me high-energy," she said.

The Easy A star is not afraid to open up about her own struggles, as she has numerous times over the years. It really is always inspiring to see celebrities discuss their issues with anxiety and other mental health disorders in such an honest way, just as Stone has, since it can only help lead to a more positive and open conversation around the subject in general.