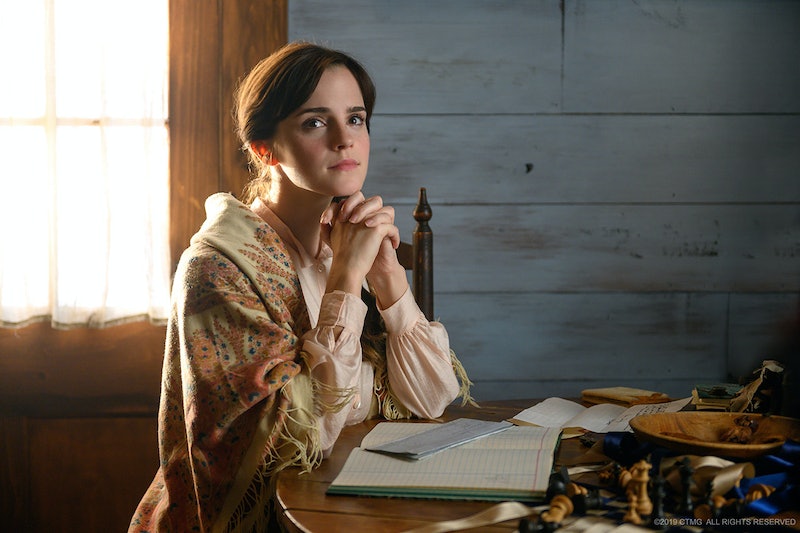 Jo March has been a feminist inspiration for Little Women fans since the novel was first published in 1868. But one of the stars of the upcoming film adaptation thinks there's another March sister who is equally as admirable. In the latest cover story for Vogue UK, Emma Watson declared that Little Women's Meg is just as feminist as Jo, despite the fact that the sisters follow very different paths when it comes to their life choices.

The former Harry Potter star explained that her new role as the eldest March sister in Greta Gerwig's anticipated adaptation of Little Women combined so many of her interests, including literature, feminism and showcasing the "female experience" on film. "With Meg’s character, her way of being a feminist is making the choice — because that’s really, for me anyway, what feminism is about," Watson told the outlet. "Her choice is that she wants to be a full-time mother and wife." The actor and He For She founder also compared Meg's decision to become a mother with her younger sister, Jo (Saoirse Ronan)'s desire to be independent and pursue her dreams of becoming a published author.

"To Jo, being married is really some sort of prison sentence," Watson explained. "But Meg says, ‘You know, I love [John Brooke, played by James Norton] and I’m really happy and this is what I want. And just because my dreams are different from yours, it doesn’t mean they’re unimportant.'"

Watson's role in Little Women intersected her passions for film and feminism both onscreen and off, as one of her favorite parts of working on the movie was getting to spend time with other actors who are passionate activists in their own right. "What was really nice about working with Laura Dern and Meryl Streep was that the three of us knew each other way before we did Little Women," she said. "We met in activist spaces, so we had this allyship and solidarity as activists that had been part of a certain movement before we ever worked together."

Since her headline-grabbing speech on gender equality at the United Nations in 2014, Watson has been much more selective about the roles that she has chosen, often making sure that her onscreen personas also reflect her off-screen beliefs. In a 2017 profile by Vanity Fair, Watson revealed that she took Gloria Steinem to an early screening of Beauty and the Beast, in order to get the feminist writer's stamp of approval. "[Belle is] absolutely a Disney princess, but she’s not a passive character—she’s in charge of her own destiny," Watson told the outlet at the time, adding that she worked with the film's writers and costume designers to update the classic character for a modern audience.

In a 2016 conversation with author bel hooks for Paper Magazine, Watson said that she wants to help make feminism a mass movement in order to encourage change. "I don't want to preach to the choir," she said. "I want to try to talk to people who might not encounter feminism and talk to them about feminism."

Thanks to her roles in films like Little Women and Beauty and the Beast, as well as her work with the HeForShe movement, it's clear that Watson is following through on her promise to engage new audiences with feminism, in whatever ways she can.