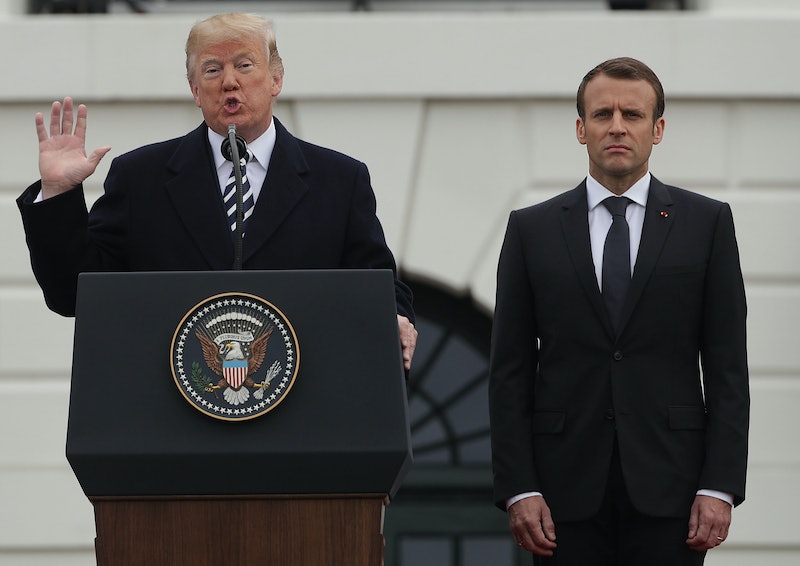 The honeymoon, as they say, seems to be over between President Donald Trump and his French counterpart Emmanuel Macron. After a trip to the French capital of Paris to honor the 100th anniversary of the end of World War I where the prevailing opinion was that Trump did not put his best foot forward, Trump tweeted several demeaning messages at the French president. Macron's response to Trump's tweets didn't rise to the bait — but it still amounted to an absolute takedown.

While Trump was in France, he drew significant criticism for skipping a planned ceremony to honor American soldiers killed in World War I, apparently on account of rainy weather. He also endured an unsubtle critique of his world outlook from Macron, who called nationalism a “betrayal of patriotism” only weeks after Trump called himself a "nationalist" at a campaign rally, according to the Washington Post. On Tuesday, then, two days after he had returned from Paris, Trump struck back at Macron in the form of a morning tweetstorm.

"Emmanuel Macron suggests building its own army to protect Europe against the U.S., China and Russia But it was Germany in World Wars One & Two - How did that work out for France?" Trump tweeted on Tuesday, in a message that the New Yorker's Adam Gopnik wrote displayed Trump's failure to comprehend history in several ways. "They were starting to learn German in Paris before the U.S. came along. Pay for NATO or not!"

Trump's next tweet said that "France makes it very hard for the U.S. to sell its wines into France, and charges big Tariffs" and called on Macron to change that, despite the fact that the import tax on a bottle of American wine sold in France is only about 11 cents, according to the AP. His next tweet then accused Macron of trying to avoid discussion of his low approval rating, and claimed that "there is no country more Nationalist than France, very proud people-and rightfully so!"

Trump's derisive comments did not go over well in France.

"'Common decency' would have been the appropriate thing," said one French government spokesperson, according to the BBC. Trump's comments about French wine drew criticism even from his allies in the French right-wing party, according to the Guardian.

Macron finally responded to Trump's comments in an interview on TV on Wednesday evening, according to the New York Times, and he essentially did so by refusing to lower himself to Trump's level.

“I do not do policy or diplomacy by tweets,” Macron said, according to the Times. “At each important moment in our history we have been allies, and between allies there is respect and I do not want to hear the rest."

The French president then went even further, saying that the tweets weren't even really directed at him. Macron saw Trump's comments, the Times wrote, as Trump merely "doing American politics." He also defended his support of a common European army, according to Politico, and said that "allies are not vassals."

In essence, Macron rejected Trump's entire mode of expressing himself — and considering the importance Trump's tweets for his whole method of governing, Macron's move amounted to a pretty powerful takedown.