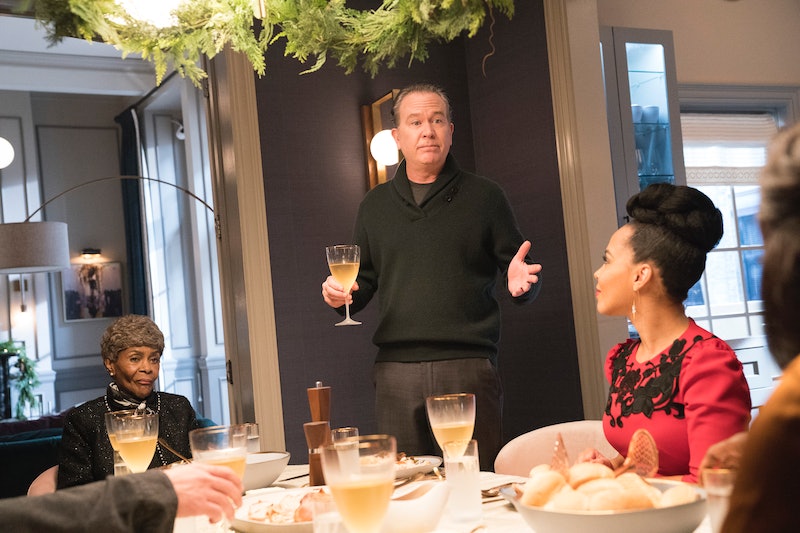 It’s not very often that Annalise Keating faces off against a real, live villain — that is, one that is as calculating and ruthless as she is. But she may have found her match in Emmett Crawford on How To Get Away With Murder. Annalise’s new boss at Caplan & Gold this season may have ulterior motives for keeping Annalise on his payroll.

With so few episodes left of How To Get Away With Murder until the season finale, the show is really doing its best to drive the plot home. Yes, it’s going off the rails, but this is just that time of the season! Up until a few weeks ago, it sure seemed like D.A. Ronald Miller — whom Bonnie and Nate, uh, “took care of” earlier in the season at Oliver and Connor’s wedding — was the man who ordered the murder of Nate Sr., Nate’s dad, but that whole plot is slowly unraveling.

While this is sending Bonnie and Nate off into a tailspin (they did murder an innocent man), Annalise decides that the best thing to do is pin the crime on Governor Birkhead. Interestingly enough, though, Governor Birkhead is shifting the blame to Emmett. What does it all mean?

Emmett has painted himself as Annalise’s number-one ally and protector at the firm, so it’s hard to tell why he would be interested in killing Nate Sr. He championed so hard to get her on staff, to keep her, to give her what she wanted all season long. What’s in it for Emmett, besides having the blood of another innocent man on his hands? Emmett has asked for Annalise’s help when he fell in love with a coworker in London, making her think that she has power over him. Tegan, Annalise’s coworker, and Annalise’s mom have even insinuated that Emmett was interested in Annalise in a romantic way. He could be, as he did try and kiss her at that dinner they had on Christmas.

So, if he really did put a hit out on Nate Sr., what is the motive? What is Emmett’s endgame? And why would he want to hurt someone so close to Annalise?

Governor Birkhead is a lying liar, but she has plenty to lose, since she’s been implicated in both Nate Sr.’s death and D.A. Miller’s death (the FBI are still a step behind Nate and Bonnie). If Birkhead could deflect and appeal to the FBI because she knows who was the mastermind behind Nate Sr.’s death, she would mostly certainly do that. She loves to lie, but she also loves to stay out of jail, too. Birkhead even has a file on Emmett, and judging by Annalise’s reaction when she saw said file, whatever is in it is not good. Emmett is not the good guy that we thought, even if he didn’t have Nate Sr. killed.

According to Deadline, Timothy Hutton, who plays Emmett, is signed on as a series regular for Season 5 of How To Get Away With Murder, but there’s no information as to his appearance on further seasons. That means that Emmett’s alleged dastardly deeds will be wrapped up in a matter of weeks, or it means that Hutton is here to stay and Emmett will be wreaking more havoc in Annalise’s life on How To Get Away With Murder for seasons to come.