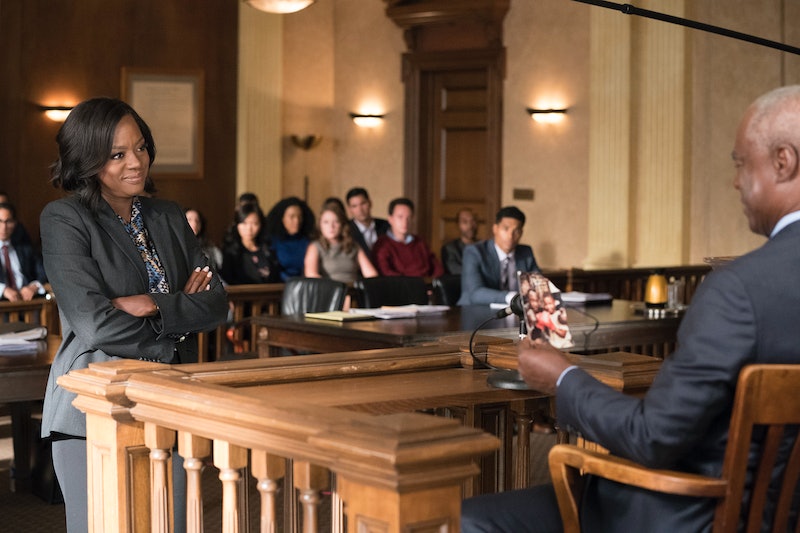 Nothing ever goes right for Annalise Keating. If you’re in her circle, beware, because all of those bad vibes are going to rub off from her onto you, and then you will all be in the Annalise Keating Pit Of Despair — patent pending. Annalise has just won her court case with Nate’s dad, and she negotiated with Governor Birkhead to not just move Nate Sr. from prison to a mental health ward but to pardon him for his crimes completely. I know, right? Sounds great. Well, it’s not great. Not anymore. Because someone killed Nate’s dad on How To Get Away With Murder and if you’re with Annalise right now, you’re doing something wrong.

Before we talk about the meat of the mystery here, can I just say that this is the sloppiest, saddest plot point in a few years of How To Get Away With Murder? I learned to care about this sweet old man, Annalise's whole plan to overturn the entire criminal justice system, and then he gets murdered. What is the benefit to the plot in Nate Sr.’s death? Why can’t Nate Jr. just be happy for 10 minutes? All of the people on How To Get Away With Murder are so uniformly miserable that Nate could get a reprieve for just a little bit. It would still be good television. Nate’s dad didn’t need to die. It’s just messing everything else about this season up, because meanwhile, everyone is still trying to figure out why Gabriel Maddox is here and what Bonnie's sister really did with her baby. There's just so much going on right now.

In case you went to bed early, just as Nate gets the news that his dad will be pardoned, the prison tells him there’s been an “incident.” Yes, he’s dead. There’s no telling yet who is responsible for Nate Sr.’s death, but there is one good idea — Governor Birkhead. Birkhead offered Annalise a job, and when Annalise renegotiated the terms and spoke truth to power about Birkhead, well, the governor didn’t love that.

She accepted Annalise’s terms (the pardon being one of them), but she is a powerful woman that won’t be made a fool of. It’s very possible that Birkhead ordered Nate Sr.’s death (he was shot in the head during transport to the mental health facility) as a way to tell Annalise that she is the big dog in this situation and not Annalise. And boy, was it effective. Annalise is shocked because she ended up taking the job with Birkhead in the end in order to save Nate Sr., so maybe the order went down before all of that happened.

Except Birkhead doesn’t know Annalise. This woman loves revenge, and she will get revenge on whoever is responsible for killing Nate’s dad. She will get revenge on the person that pulled the trigger, the person who ordered the hit, and the person who made everyone’s coffee that morning because it was a little too burnt for her delicate tastes. Annalise knows how to play every game in the book. She wrote the book. Even at her weakest moment, Annalise Keating is not here for anyone's BS.

Annalise is going to have to take control of this situation, especially when it comes to Nate. Annalise got played, and Nate will probably blame her for his dad’s death, especially because being moved to a mental health facility wasn’t a bad option for Nate Sr. Now, he’s dead, and Nate must pick up the pieces of the future he imagined with his father. And Annalise must figure out how to make things right — if she even can.

More like this
The BBC Is Adapting A Best-Selling Novel About A Mistaken Killer
By Darshita Goyal
What’s New On Netflix: Ana De Armas’ 'Blonde' & A Nick Kroll Special
By Arya Roshanian
The 'Reasonable Doubt' Cast Includes A 'Save The Last Dance' Reunion
By Grace Wehniainen
'Elite' Season 6 Is Arriving Sooner Than You Think
By Gretchen Smail and Grace Wehniainen
Get Even More From Bustle — Sign Up For The Newsletter