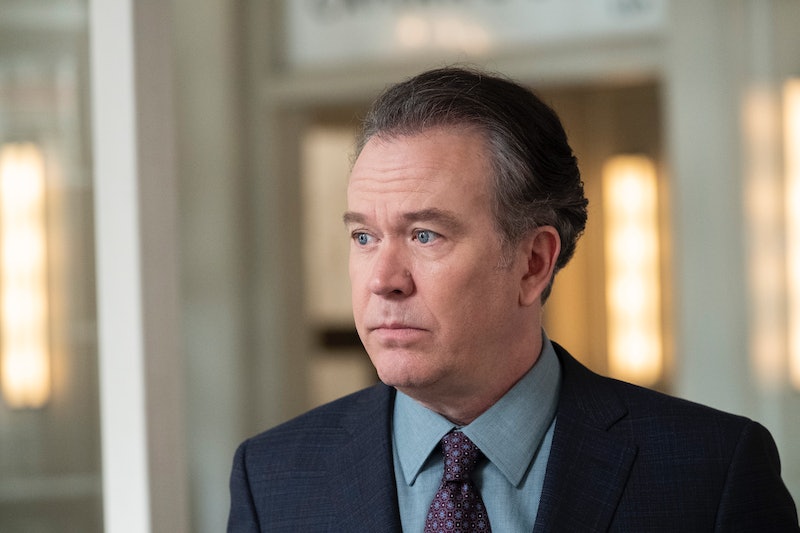 Spoilers ahead for the Season 5 finale of HTGAWM. How to Get Away with Murder Season 5 ended with a heart-stopping bang. Frank continued to move with the skill of a master chess player by finding out the truth behind Nate, Sr.’s murder and concocting the right lies to ease everyone’s minds. The Keating Five also helped Gabriel get out of his conundrum by getting Agent Talesco fired and Laurel finally had a major showdown with her brother. But, as expected, the biggest shocker came at the end of the episode when Emmett Crawford was shown gasping for air on the floor with an overturned drink nearby. So, it looks like the big question for next season (because they HAVE to come back, right?) is who killed Emmett Crawford and will they get away with this murder?

His presumed death comes right on the heels of Tegan, Annalise, and Frank providing conclusive evidence to clear his name in the Nate, Sr. murder. However, Governor Birkhead and Xavier Castillo decided that she would address the public and point the finger at Emmett.

As her address was happening on TV, Emmett was conveniently dying on the floor from what appeared to be a poisoned drink. Yep, it’s going to be yet another whodunit mystery that Annalise will have to solve.

So, who are the prime suspects? It could literally be anybody on this show, but a few people are looking super suspicious right now.

First up is Tegan, who has been a complete wild card this entire season. Fans initially weren’t sure if she was working some unknown angle to stir up trouble, but her actions have shown an allegiance to Annalise. She went into Emmett’s office as he was pouring that fateful drink to celebrate a triumph over the FBI and warned him that he was still under the radar of the Castillos. He offered her a glass, but she quickly turned him down and said she was a gin drinker.

Tegan told Emmett to not move until she came back and walked out of his office with a disturbed look on her face. She could have been worried about the Castillo situation but there’s always a chance that she knew Emmett was going to die. What if Tegan is playing everyone right now? Did she make some kind of deal with the Castillos to take Emmett out? People on this show do terrible things when they are backed int a corner.

During her phone call with Annalise, she also mentioned that she was supposed to be getting a drink with him — even though she had already turned him down and in the midst of a sort of important call. Was she just oversharing or was that to somehow cover her tracks? Only time will tell.

There’s also a chance that Governor Birkhead and Xavier Castillo are involved in this murder. Perhaps they want Emmett’s death to look like a suicide because he was overcome with guilt. Or, maybe they think it is a way to further deflect attention off of her right now by introducing a new possible suspect who would want to take out Emmett.

It seems more plausible that his death would harm her because it falls so close to when she literally pointed the finger at him on live TV. Xavier could be acting alone under the orders of Jorge to take Emmett out and point the sole blame at Governor Birkhead in this situation. After all, this family has proven many times that they cannot be trusted at all.

The person behind Emmett’s murder will probably end up being a total wildcard that leads to some more shady deals and twisty drama because that is the HTGAWM way. But, right now, Tegan, Birkhead, and Xavier are all looking quite suspect because they have the access and opportunity to make it happen. Hopefully, How to Get Away with Murder will come back for another round with answers to this messy situation.