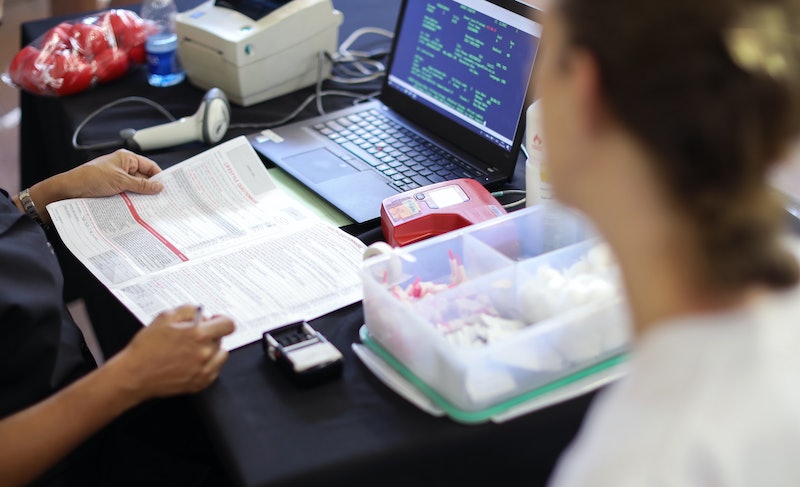 Experts estimate that between 200,000 and 400,000 sexual assault evidence kits sit untested and forgotten in storage. But 2019 saw the highest influx of new rape kit legislation ever: 35 states plus Washington, DC, introduced 105 new bills, with 28 new laws enacted to help get forgotten rape kits tested. With eight more states planning on reform this year, experts say the nationwide rape-kit backlog is on track to see major change in the 2020s.

Sexual assault evidence kits, or rape kits, are standardized containers where evidence collected from a survivor of sexual assault is kept. Most kits include a collection of biological specimens collected during a sexual assault exam, including swabs, hair, and blood samples. The reasons these kits go untested for years, or even decades, varies from place to place. Researchers have attributed the backlog to several factors, including law enforcement bias, lack of resources, and lack of training.

Ilse Knecht, a policy and advocacy director for sexual assault awareness nonprofit the Joyful Heart Foundation and its End the Backlog initiative, says she’s seen a dramatic increase in dialogue and awareness around rape kit backlogs over the past decade. “I think in five years or so, it's going to look dramatically different,” Knecht tells Bustle.

Data from Google Trends shows a steady increase in searches for the term “rape kits” since 2010, when Illinois became the first state to pass a law to address its rape kit backlog. End the Backlog became one of Joyful Heart’s top policy priorities the same year, and the organization has cited the Illinois law as paving the way for other states to enact reform. Knecht says the increase in people just talking about untested kits has been essential to the state-level policy reform that’s taken place. “The conversation has changed so dramatically from 10 years ago,” Knecht says. “Sometimes people didn't even know what a rape kit was.”

By 2015, rape kits had become a national policy issue, as the Obama administration announced its Sexual Assault Kit Initiative. The government began investing money to give local jurisdictions the resources to test their kits. A joint multi-million-dollar investment between the Manhattan District Attorney and the Department of Justice led to 100,000 formerly dormant rape kits being taken out of storage nationwide and tested, resulting in over 1,000 arrests, though many kits were so old the local statutes of limitations had passed. On Dec. 30, President Trump signed the Debbie Smith Reauthorization Act of 2019, re-funding the initiative to give local forensics labs the resources to test backlogged rape kits. Nine states in 2019 enacted comprehensive reform aimed at not only addressing current backlogs, but preventing them from happening again. According to End the Backlog, there are now 12 states that have enacted broad-scale reform. “Elected officials have really taken this issue on and run with it,” Knecht says.

Though the backlog is a national issue, enforcing reform lies primarily in the hands of local governments and law enforcement. In many places, backlogs formed because law enforcement weren’t trained to handle them, says public policy consultant Stephenie Hoelscher. “I don't believe it was ever out of malice that prosecutors or law enforcement weren't pursuing some of these kits,” she says, “but maybe a lack of understanding.”

Hoelscher began researching Kentucky’s backlog for the state auditor in 2015, finding that widespread lack of training, in both handling the kits and working with survivors, contributed to these backlogs. Knecht encountered the same issue researching rape kits nationwide.

“It's basically been a systemic neglect of sexual assault cases and sexual assault survivors,” she says. “So many investigators working with cases had no idea about trauma or how trauma impacts survivors and their ability to recall details.”

In addition to not being trained in how to interview sexual assault victims or how to pursue sexual assault crimes, Hoelscher says that police weren’t utilizing an essential tool at their disposal. CODIS, the FBI’s Combined DNA Index System, rolled out in 1990, giving local law enforcement access to a nationwide database of DNA evidence — exactly the kind of evidence that rape kits collect — allowing police departments to cross reference DNA samples and identify suspects. Hoeslcher says the program wasn’t accompanied by any comprehensive training for local law enforcement, meaning that many officers simply didn’t know how to use the database.

"There is a cost beyond the horrible crimes that go on to be committed."

Years of research have found that training law enforcement to adequately respond to rape kits has an economic incentive for local jurisdictions, on top of bringing rapists to justice. Ongoing research initiated in 2011 in Cuyahoga County, Ohio, found that testing kits “saved a net total of $38.7 million dollars, or $8,893 per tested kit,” according to Joyful Heart. The savings were calculated based on how much it cost the county when unconvicted rapists went on to commit other crimes; testing the kits meant that future, costly crimes were prevented. The research also calculated tangible costs for survivors, things like medical expenses and missed work, at $5,556 per victim. Intangible costs, which include things like trauma and distress, racked up to a total of $198,212.

Hoeslcher used the Cuyahoga research to conduct a similar study in her home state of Kentucky. Her study found that unconvicted rapists in Kentucky were often serial criminals, and that many went on to commit other crimes, meaning the state had an incentive to pursue sexual assault perpetrators more aggressively. “There is a cost beyond the horrible crimes that go on to be committed,” Hoeslcher says.

Law enforcement departments are often accused of deprioritizing rape kit testing as a result of rape culture, but Hoelscher's research found that the reason kits go untested is multi-pronged. In 2015, she learned that many kits weren’t being sent out for forensic testing because the state’s forensic lab was already struggling to investigate a backlog of evidence from other crimes. “It wasn't rape culture or malice, it was law enforcement trying to efficiently utilize scarce forensic laboratory resources,” Hoelscher says. Researchers in other jurisdictions have noted that police departments’ overwhelmingly low rates of identifying and apprehending rape suspects may speak to an unconscious rape culture, and that addressing backlogs will not only take more money, but a shift in police priorities.

Several states have bills on the docket for 2020 or are enacting new laws that seek to at least partially address local backlogs of rape kits. Kentucky is set to establish a tracking system by July 1. California now requires rape kits to be tested within 120 days after being submitted, thanks to an October law. While the economic incentives for improving the backlog are widely acknowledged, Knecht thinks the main driving force behind recent and upcoming reform is lawmakers responding to their constituents. And the constantly growing conversation around the problem keeps her hopeful.

“The mindset has changed so much,” she says. “When we look at the backlog, it is a representation of how these crimes are treated in our society. And that is changing.”