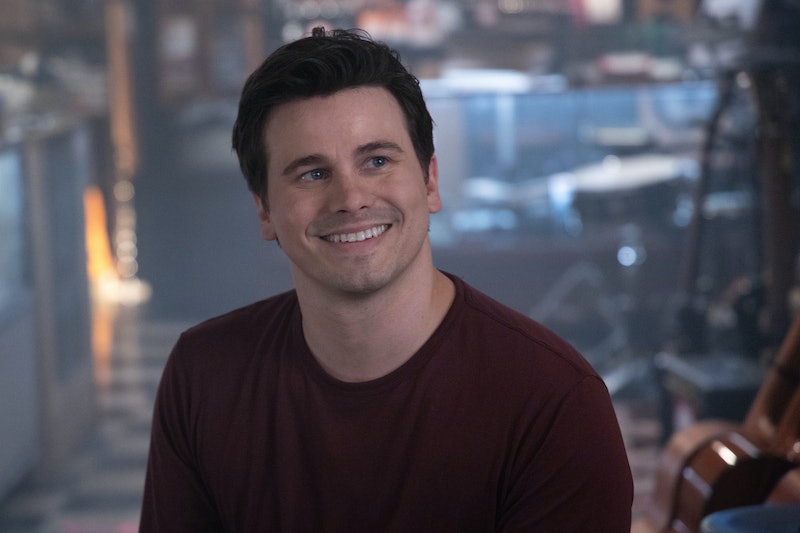 Maggie is totally convinced that Eric is her mom's boyfriend on A Million Little Things, but fans aren't so sure. There are theories that Eric on A Million Little Things is actually Patricia's son, or that he could be a new love interest for Maggie, or pretty much anything besides just being Patricia's younger boyfriend — mostly because that's too expected. The Episode 4 synopsis says that "Maggie is shocked to learn Eric's true identity," so it's probably not what she's thinking.

Maggie's mom Patricia also flat out denied that she was seeing Eric during the Oct. 10 episode. When Maggie asked, Patricia gave a confused, "What? Maggie, no." Maggie didn't believe her mother, but many fans do. As Patricia tells it, Eric is just a friend who she "met about a month ago." However, there's reason to believe the two have a history that goes back further than that. In an interview with Deadline, show creator DJ Nash said, "[Eric is] a person from Patricia's past" and that he will "shake things up in a huge way." A month ago doesn't really count as the past, so perhaps Eric is someone Patricia knew of but only just recently met. The fan theories all point to him being basically anyone BUT her new boyfriend.

Some Think Eric Is Patricia's Son

Perhaps Patricia gave Eric up for adoption at some point and only recently reconnected with him? She was overheard on the phone telling him that she's sorry for hurting people but not for meeting him. Maybe reconnecting with her son is what hurt her marriage? "I just wish everybody knew just how sorry I am," Patricia said. "I don't regret knowing you Eric, or what we have, what I regret is hurting people."

Or, Eric Is Connected To Maggie's Brother

Eric could just as easily be connected to Patricia's late son Chad and she's befriended him in some way. Maybe he's a friend or boyfriend that just now reached out all these years after Chad died. It's worth noting that Rome has a much younger friend that he's mentoring through a tough time (Barbara Morgan's son PJ), so Patricia could just as easily be helping Eric through a rough spot of his own.

Many Believe Eric & Maggie Will Connect

There's also potential that, whoever he is, Eric becomes a love interest for Maggie. The two hit it off at the bar before Maggie learned that he was there to see her mom. They shared a similar sense of humor and a lot of flirtatious looks. In upcoming promo photos, they're hanging out in a music shop together and Eric encourages Maggie to go to an open mic night (that's the flyer he's holding). If they can connect over her love for music, they might be able to strike up a relationship. The same episode this photo is from also says in the synopsis that "Gary feels disconnected from Maggie." Uh oh.

Jason Ritter, who plays Eric, recently talked to TV Line about his mysterious character. And, while he couldn't give much away, he did hint that things are going to be complex from here on out. "I will say that Eric is doing a super-complicated, delicate sort of dance," Ritter said. "He's trying to navigate a super-complicated situation, and he's trying his best."

This Eric storyline was actually inspired by Melora Hardin, who plays Maggie's mom. Nash told TV Line in the same interview, "I was just talking to [Hardin], just hearing her rhythms and the way she approaches life, and it immediately led to her arc for the season, which is a beautiful story and hopefully has everything we want to do, which is the heartbreaking story that has humor around it."

Yeah, this is leaning more and more away from "boyfriend" by the minute. Eric's complicated, shocking, and heartbreaking reveal is coming in the Oct. 17 episode, according to TV Line. So buckle up, MLT fans, because this is probably not going in a direction that anyone would expect.