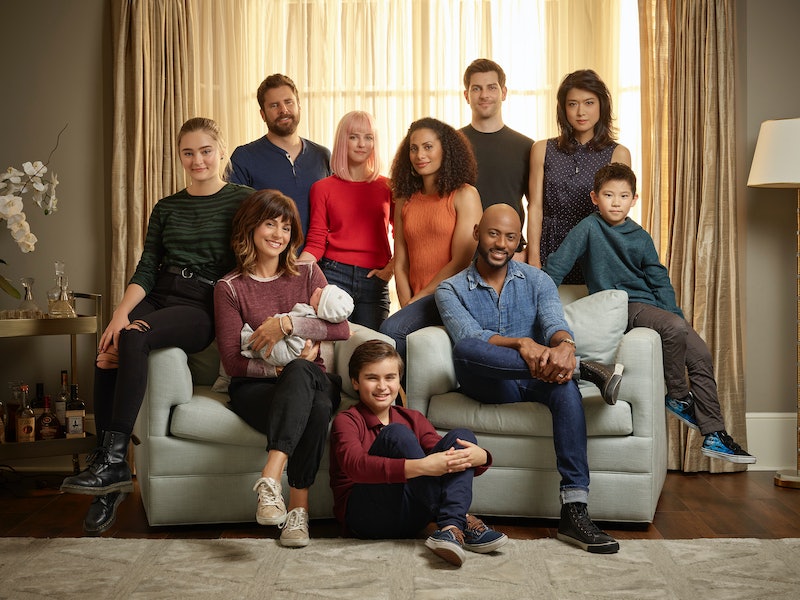 It's been six months since the Season 1 finale of A Million Little Things aired. That's a lot of time for your brain to forget the roughly one million little things that happened on the show, which is jam packed with complex characters, major plot points, and unexpected twists. Because this show is so character driven (it's basically This Is Us, but centered on friends instead of family), it helps to recap A Million Little Things Season 1 by remembering what happened to each character and piecing it all together.

For some background, the show is centered on the friendship that four men formed years ago when trapped in an elevator together. Jon was the successful businessman, Gary the charming comic relief, the highly anxious and successful Rome, and Eddie, a professional musician with an alcohol use disorder. Once they met, their significant others came into the picture as well. Jon was married to a Frenchwoman named Delilah, Gary was seeing a string of women, Rome was married to chef Regina, and Eddie was married to lawyer Katherine. They all became irrevocably entangled in each others' lives.

After Jon's death by suicide in the pilot episode, the remaining characters formed an even tighter bond, and let Gary's new girlfriend Maggie (conveniently a therapist) into the mix as well. Here's how all of their stories unfolded throughout the first season:

Jon's suicide in the first episode is the catalyst for much of the rest of the show. Suicide is a complicated matter, and often no one incident is to blame for someone feeling suicidal. The show touched on many things that Jon was struggling with in his life, including huge financial losses and bad business deals, but one of the larger events he suffered through was his personal connection to Sept. 11.

Jon was supposed to be on one of the doomed flights out of Boston, and had convinced his college roommate Dave to take the trip with him. But Jon narrowly missed the flight, and Dave ended up dying on board. It was a traumatic moment that Jon felt guilty about for the rest of his life, and the show presents it as one of the main reasons that he struggled with his mental health.

A few months after the events of Sept. 11, Jon met Delilah at the very same airport while he was there mourning his friend. They struck up a conversation, and soon they would fall in love, get married, and have two children. Two years before Jon's death, Delilah said he grew increasingly distant and busy with his real estate business. Frustrated and feeling alone in her marriage, Delilah connected with Eddie, who was feeling similarly in his own marriage.

The two of them started an affair, which Jon knew about before his death. However, in Jon's final voicemail to Eddie, he told Eddie, "Love each other," which seemed to insinuate that Jon had given them his blessing.

Delilah and Eddie began a relationship behind their partners' backs, and they had been planning to leave their other relationships. Delilah was set to tell Jon the day before his death, but he never showed up to their planned dinner. Similarly, Katherine worked late that night and Eddie didn't get a chance to tell her either. After Jon's death, Delilah told Eddie they had to end things because it wouldn't look or be right. She later found out she was pregnant with Eddie's baby, and she nearly had an abortion.

She didn't go through with it, but Eddie reluctantly agreed that she had to say the baby was Jon's. Delilah went into labor at the end of Season 1.

Their daughter Sophie didn't have too many major storylines in the series that are worth remembering for Season 2. She began learning to drive and understandably struggled with her father's death. She is also learning how to play guitar from Eddie and is very close to him. If she ever finds out the truth about Eddie and her mom, it will likely cause a huge conflict. She also grew closer with Rome and Gary in her father's absence as they all stepped up to do "dad" things like attend school dances or give a much needed pep talk.

Delilah and Jon's son Danny is usually a bubbly, charming boy, but he went through a pretty serious storyline in Season 1. Danny came out as gay to his mom and sister and began a relationship with a boy named Elliot. That relationship hit a snag when Delilah accidentally outed Elliot during his date with Danny. Elliot wasn't comfortable sharing that part of himself publicly yet, and he left the date early. Season 2 will likely explore Danny's sexuality further.

Katherine is Eddie's wife. They share one child together named Theo. She found out a couple of episodes in that Eddie had been cheating on her with Delilah. Katherine was understandably upset, stating that the only reason she was working that much and absent that much was because she was supporting their family after Eddie's band failed. The two separated, with Katherine briefly dating a lawyer at her firm named Hunter. She was also offered a partner position at her firm, but was turned down when she made the one request that she be allowed to be home for dinner with her son every night. Hunter was given the partner position in her stead.

Eddie and Katherine decided to get a divorce midway through the season, but they put things on hold after they started communicating more and rediscovering their feelings for one another. Katherine also got in a car accident, and almost losing his wife made Eddie realize how much he still loved her. During the divorce proceedings, they changed Theo's next-of-kin guardianship from Delilah to Gary.

Eddie also started his music career back up again midway through Season 1. He sold a new song that he wrote and went on tour with his band. He remained sober throughout the first season, although there were moments where he was tempted.

The season ended with Eddie about to tell Katherine that Delilah's baby is his — so that will likely dramatically affect any reconciliation attempts in Season 2.

Gary and Maggie met in a breast cancer support group, having both undergone treatment for the illness. Gary was previously a commitment-phobe, but Maggie (and also likely Jon's death) brought out a new side of himself. The two actually ended the season living together, which was a major character growth for Gary.

Maggie's big storyline was that she was no longer in remission from cancer, but she was hiding that from everyone. She had decided just to live what life she had left. But meeting Gary made her care about surviving longer than that. With his encouragement, she re-entered chemo treatment and underwent surgery. (Gary and Maggie briefly broke up when she was still resistant to wanting to go to chemo and he was pushing her to start. During that break, Gary slept with Jon's assistant Ashley.)

Maggie ended the season in remission (again). The other main thing you need to know about Maggie is that her brother Chad died in a car accident, and, because of that, Maggie chooses not to drive. Her parents are also especially overprotective since they already lost one child.

Rome was also experiencing suicidal thoughts in the pilot episode, but stopped when he took a phone call from Gary who was calling to tell Rome that Jon died. Rome continued to struggle with depression throughout the season but started going to therapy and taking anti-depressants — much to his father's embarrassment. Rome also quit his job to write his screenplay, which was based on his own life story.

In her personal storyline, Regina opened a restaurant after Jon left her and Delilah a building to open it in. She sought financial help from her estranged mother, but it turned out that her mom borrowed the money from Regina's uncle. Her uncle had molested both Regina and her mother when they were children. The two women began to bond over that shared trauma, but are still working through their complex relationship. Regina donated her uncle's money to a women's shelter and took on a new investor: Andrew, a successful restaurateur.

Regina found out midway through the season that Rome was struggling with his mental health. She supported him in quitting his job and going on anti-depressants. At the end of the season, Rome told Regina he wanted to have a baby, but Regina said she didn't want to.

Andrew is also a widower, and he and Delilah seemed to be hitting things off towards the end of the season. With her relationship with Eddie on the back burner, Delilah could start things up with Andrew in Season 2. But Gary is suspicious of Andrew, so fans may also want to be cautious of his true intentions.

Ashley was Jon's assistant, and the one who found him after his death. She initially hid Jon's goodbye note for Delilah and deleted a bunch of files from Jon's computer, wanting to keep his secrets for him and also protect his family from them. Jon trusted Ashley with one of his biggest secrets, the fact that he'd kept his college apartment. In fact, he'd bought the whole block of buildings to keep the apartment safe. Once Ashley came clean about everything, Delilah ended up selling the buildings because she needed money to pay her mortgage. Jon had leveraged the house in his failed business dealings and owed millions of dollars.

Ashley was also making payments on the buildings from Jon's life insurance policy that he left to his three friends and a mystery woman named Barbara Morgan. The insurance policy was called Rutledge. It was a shorthand word between the men that meant "take care of my family." The word stemmed from the day they met, while stuck in an elevator. The elevator inspector's last name was Rutledge, and Jon had joked that — if anything happened to him in the elevator — Rutledge better take care of his family. The life insurance was untouchable by Jon's debt collectors since it wasn't in his or Delilah's name. Jon knew that his friends would use the Rutledge money to take care of his family.

At the end of her story arc, Ashley went to Barcelona, using the ticket Jon had bought her before his death.

The fourth Rutledge beneficiary was Barbara Morgan. In the final episode, viewers finally learned how she was connected to Jon. Barbara had been dating Dave — Jon's friend who died in 9/11. She was pregnant when Dave died, and got engaged to a firefighter shortly after — because she didn't want to raise her child alone. Jon lashed out at her for moving on so quickly, a move he later regretted. He sent Barbara an apology video before his death and also left her part of the Rutledge money.

Barbara raised her son, Patrick (aka PJ), to believe that the firefighter was his father and never told Patrick about Dave. However, in the finale, Patrick is seen watching Jon's apology video, so he may put the pieces together in Season 2. Rome also knows Patrick. He met Patrick in the hospital waiting room earlier in the season and the two bonded over struggles with their mental health. Rome checks in with Patrick every once in a while and encouraged him to call a helpline if he needed it.

And that's what you missed on A Million Little Things. Season 2 is bound to open up even more mysteries and dig up more unanswered questions. So enjoy this moment of knowing everything that happened in Season 1, because the knowing is about to stop.