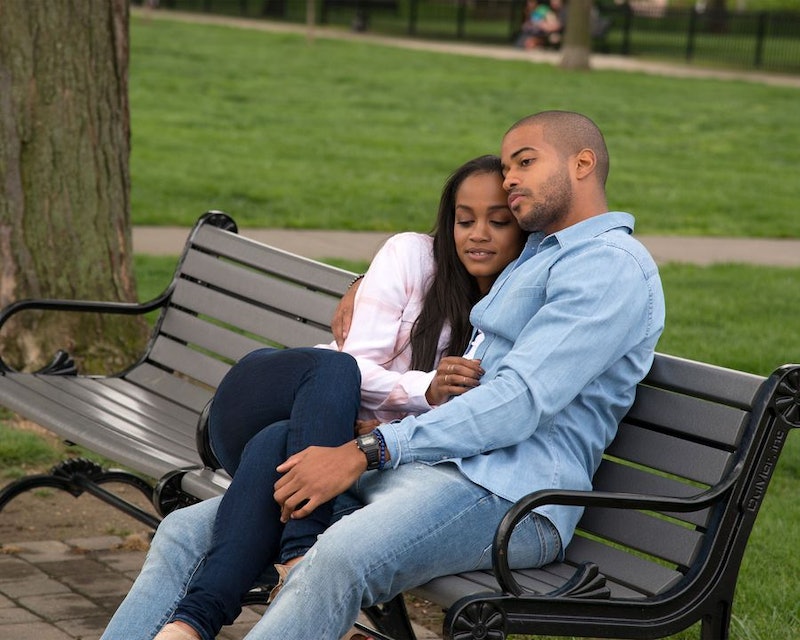 This racial boundary-pushing season of The Bachelorette is finally in its home stretch. When the remaining black man on the show, Eric, met Rachel's family on The Bachelorette, just like the other two remaining contenders, and the meeting is... totally normal. In fact, it was almost exactly like dozens of other similar meetings where the Bachelorette introduced their parents, siblings, and friends to the men fighting for her heart. If by chance this season of The Bachelorette hasn't already proven that there's nothing for network or audience alike to fear about including black people on this franchise, this date really demonstrated that bringing more diverse candidates on the show to find love changes literally nothing — so it should be a no-brainer going forward and it's long overdue for the franchise.

Eric probably had the least eventful, most expected meeting with Rachel's loved ones. He talked about forming a new family with Rachel was important to him because his parents never had a successful marriage. And, like when Peter and Bryan visited, Constance, Rachel's sister, was the first one to go in deep and probe for details. Unlike when Nick met with Rachel's family on The Bachelor, race didn't even come up during Eric's date, because there weren't any relevant questions to ask. Rachel's sister is in an interracial relationship, so she had some simple advice for Rachel and Nick, but this season, Eric's confession that he's never been in love before received far more attention than their shared racial background.

Both the caveats and the positives presented by Rachel's family are totally familiar to any Bachelor or Bachelorette fan. "He's never been in love, his most serious relationship has been eight months," Rachel and her cousin said, but they also also complimented Eric because, "He's not a fairy tale person. He's very real." So, after all of the buildup to this season, Eric's inclusion in the show's final three men should put any lingering worries about The Bachelorette remaining at least this diverse for any future seasons completely to rest. There's nothing alienating about seeing Eric and Rachel onscreen together falling in love on The Bachelorette, and it helps nonwhite viewers feel more included and represented. The show needs to remember this totally normal moment when casting for the next Bachelor and beyond — because diversity doesn't affect the drama level, and it only makes the show more real.