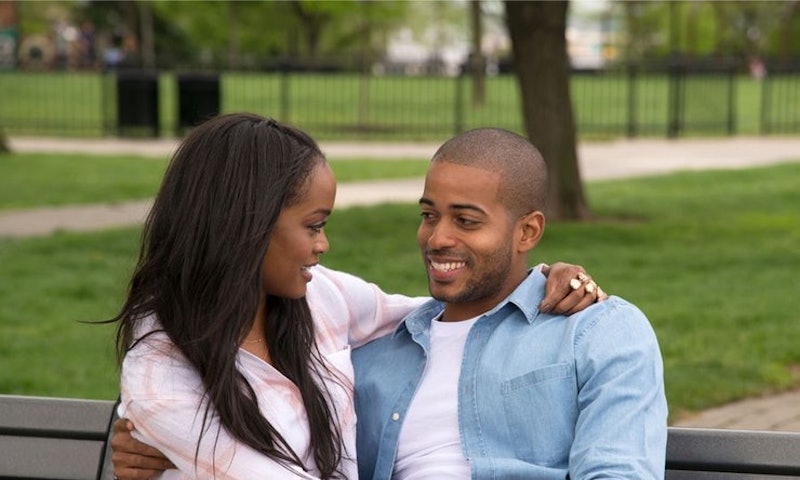 Rachel Lindsay's dramatic season of The Bachelorette is officially in the home stretch. She'll be picking her winner in just a couple of weeks. One of the early contentious names in the house this season is contestant Eric Bigger, but it is not Rachel that had the issue with him. In the first couple of week, Eric inspired the ire of some of the other dudes in the house but he is still standing strong, while those who fought with him (like Lee and Iggy) have been kicked to the curb. He is looking like he may have the magic to go all the way in this competition and there is one major clue that Eric will win The Bachelorette.

Last week Eric finally took the plunge and sweetly confessed his love for Rachel saying, “You embody everything I would want in a wife. I’m just here to say, I’m in love with you .... I love you.” Upon seeing this, my heart continued beating at a normal pace because I am healthy, but it was feeling full of love for this potential couple for sure. Rachel's reaction to Eric's confession of love was what really sealed the deal for me. Once he said it, and he genuinely seemed authentic with his feelings, she smiled like she had been waiting to hear those words from him all along. It wasn't one of those moments where you can tell the Bachelorette feels uncomfortable with an outburst of affection and just tries to play it off. Rachel looked really pleased and answered him with a kiss.

Seeing how Rachel reacted when another contestant blurted out that he was falling in love with her further displays why I believe she is being real with her feelings for Eric. When Dean told Rachel that he loved her, she answered by saying that she was falling in love with him as well. The thing is, she sent him home right away after that. To me, that seems like she was caught off guard by his confession of love and just comforted him with those words, even if she didn't feel as strongly for him. The fact that she didn't say that to Eric makes me think that she really cares about him and wants to take her time responding with her real feelings. Otherwise, she would have just sent him packing like Dean. Her reaction to Eric was less surprised and was more of a pleased reaction.

When Eric told her that he loved her, something different happened than with the other men who confessed their feelings to her. She paused and she seemed almost relieved that the man she is falling for is falling for her too. Of course, this is just my opinion from watching the clip of the confession, but that is what makes me think that Eric is a shoe-in for winning Rachel's hand in the finale. They have a connection that the other men just don't have with her, and that is something that she seems to be looking for in her future fiancé.