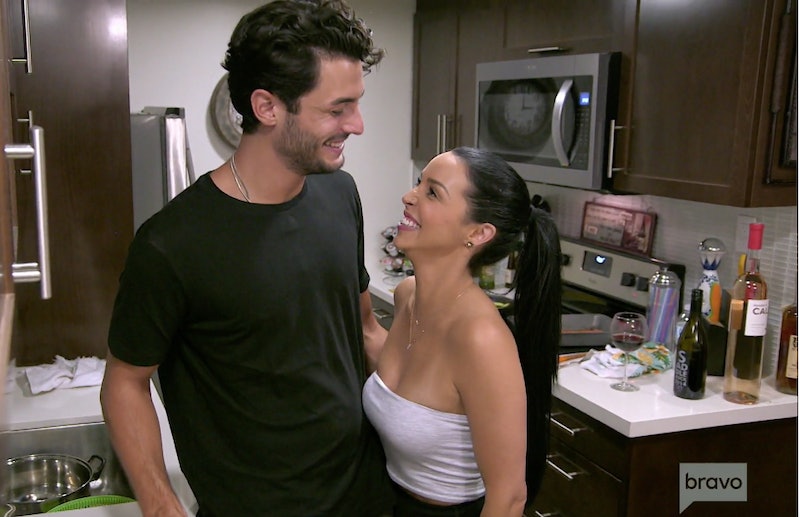 Scheana Marie has spent a lot of time dating on Vanderpump Rules, which is pretty standard for a woman in her late 20s and early 30s. She was married, then she was in a serious relationship, and now she's dating around. So far this season, she's been keeping up a best-friends-with-benefits situation with SUR barback Adam Spott, which was all fine and dandy until Scheana went on a date with a man named Ethan on Vanderpump Rules, as seen in previews for the April 22 episode. Adam has made clear he's not ready for a committed relationship, but Scheana's fling could end up making or breaking the kinda-couple.

We don't know a lot about Ethan, but in previews for the next Vanderpump episode, we see that Scheana has him over to her house for dinner (ladies and gentlemen, he cooks!), and they then spend a little time making out on her bed. At this point, he's probably the only person on the show that will come to Scheana's apartment since she moved so far away.

Some internet sleuthing reveals that Ethan, whose last name is Thompson, is a model represented by D Management Group. He's 6'2" and has dark brown eyes and dark brown hair. He is a very, very attractive dude. It's easy to see why Scheana would say yes to a dinner with him.

According to Ethan's Instagram, he's a nice Jewish boy who celebrates Passover with matzoh and Manischewitz wine. He lives in New York City, and he — like most people who have an Instagram — is a big fan of the selfie. There aren't really any photos of Ethan with women, meaning that he's either single or not that into publicly sharing anything about his relationship. How novel in such a social media-obsessed world. Sometimes, there's just nothing to report.

Besides being very, very ridiculously good-looking, Ethan is also a musician with his own Spotify page and moniker, Mr. ET (get it? Ethan Thompson?). His music is of the soft, electronic, chill wave persuasion, and he has two songs on his page that would definitely make DJ James Kennedy, aka the White Kanye West, sit up and take notice (do we smell a collaboration coming?).

Ethan seems like a cool guy, and if Scheana wants to be single, hanging out with him seems like a perfectly fine way to spend her time. However, previews also suggest that Adam may not be 100% happy that she's going out with someone else. Scheana and Adam have repeatedly insisted that they are "just friends," so maybe if Adam isn't cool with Scheana dating other people, they should have a conversation about it. Being friends with benefits works out great for some people, but if Adam doesn't want to be exclusive, it's not fair to him or Scheana for him to get mad if she's dating other people. An honest conversation will keep the both of them happy — whether or not they decide to spark up a relationship or go their separate ways.