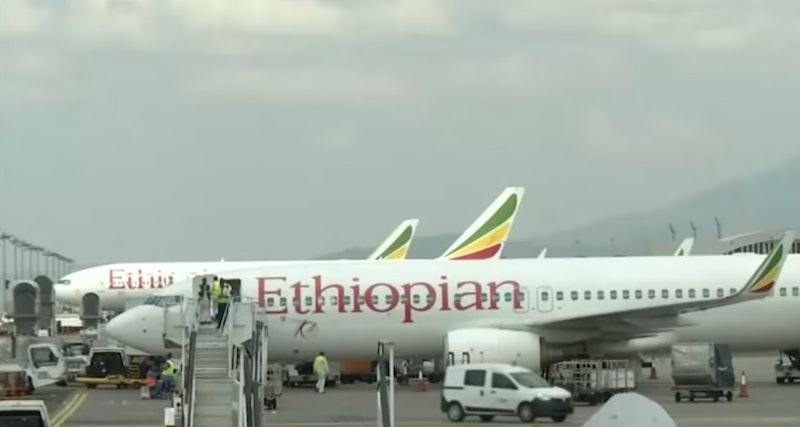 Nearly a month after a Boeing 737 MAX 8 aircraft went down in Ethiopia, new details have emerged about how the pilots responded. On Thursday, the country's government issued a preliminary Ethiopian Airlines crash report indicating that pilots followed all of Boeing's instructions before the wreck.

After the crash killed 157 people last month, many analysts suspected that the craft's automated flight control system might have been responsible. The Maneuvering Characteristics Augmentation System (MCAS) is programmed to push the nose of the plane down to prevent a stall. Some experts believe that sensors may have given an erroneous stall warning and forced the craft into a deadly dive, according to The Seattle Times. That's what happened when a 737 MAX 8 crashed in Indonesia in October, and Boeing said after that wreck that the problem could be fixed if pilots manually took control.

But the new report suggests that didn't work for the Ethiopian Airlines pilots. Ethiopia's minister of transport, Dagmawit Moges, announced on Thursday that the crew had "performed all the procedures, repeatedly, provided by the manufacturer," per The Washington Post. Nevertheless, the pilots were "not able to control the aircraft."

Her remarks indicate that MCAS was active and that the pilots tried unsuccessfully to disengage it, according to The Washington Post. In a statement obtained by Bustle, Boeing Commercial Airplanes CEO Kevin McAllister said, "We will carefully review the AIB's preliminary report, and will take any and all additional steps necessary to enhance the safety of our aircraft."

Ethiopian Airlines responded to the report in a statement posted to its website after Moges' press conference, saying that the government report showed that its pilots had "followed the Boeing recommended and FAA-approved emergency procedures."

The statement continued to say that "despite their hard work and full compliance with the emergency procedures, it was very unfortunate that they could not recover the airplane from the persistence of nose diving."

In the lead-up to the government's news conference, however, at least one news report suggested that the crew might not have followed all of the procedures. On Wednesday, Bloomberg reported that a "person familiar with results of the Ethiopian investigation" said that the pilots neglected to perform a "critical part of the checklist." The individual said that the crew had indeed disabled MCAS, but didn't first fix the plane's setting so that it wouldn't be configured to dive. The person also told Bloomberg that the pilots tried reengaging the MCAS trim system despite explicit recommendations from Boeing not to do so.

Boeing has been working on updates to the 737 MAX 8 since the crash. For one thing, all of the crafts will now be required to include a "disagree light" safety feature that activates when conflicting data comes from the angle of attack sensors. The light may indicate that there's a sensor malfunction and that MCAS may not be working properly.

Thursday's report from the Ethiopian government is just a preliminary step in the investigation to figure out exactly what went wrong for the downed jet. A full official crash report will be concluded within a year, according to The Washington Post.