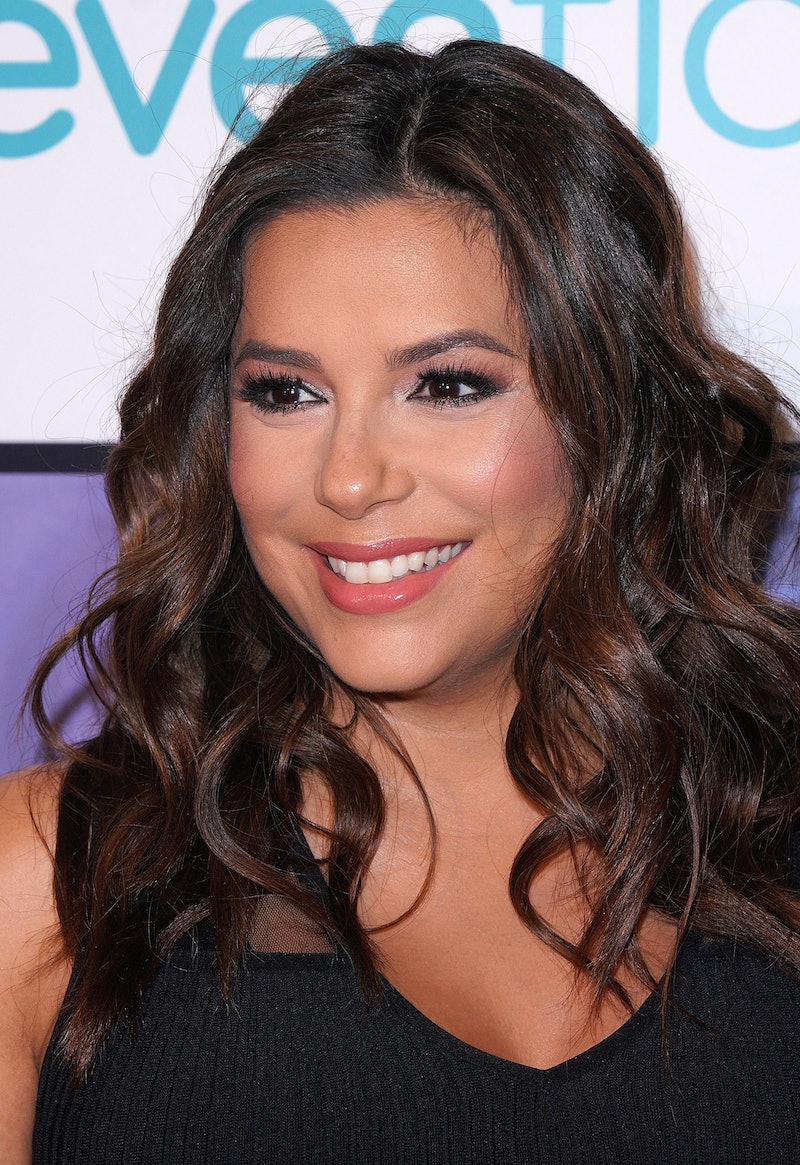 The world just got a whole lot cuter thanks to an Instagram posted by Eva Longoria. On July 31, Longoria shared a new photo with her son on her IG account. The snap, which is on the cover of Hola! magazine, features the actor holding her newborn, Santiago Enrique Bastón, in what just might be the cutest thing you'll see all day.

Longoria's caption for the post included a fun play on her little one's pose. She wrote, "Here he is! Santiago Enrique Baston waving at the world! Couldn't wait to share this picture with y'all!" Her son does look like he's getting his wave on, alongside his beaming mom. While the Overboard star has shared some adorable photos of her baby before, this magazine cover served as the first time fans have gotten a glimpse of his face.

She's been totally open about sharing all kinds of sweet moments ever since introducing her son to the world on June 21. In an Instagram, which featured a pic that was also featured in Hola!, she wrote, "Thank you everyone for showering my baby boy with all your warm wishes!" Longoria also took time to turn the attention to an important issue as she wrote, "In light of my son's birth I wanted to bring focus on the families that have been separated at the border." She then directed her followers to support causes such as RAICES and the ACLU, providing a way for people to take action, too.

As previously mentioned, Longoria has shared other snaps of baby Santiago in the past couple of weeks. A few days after his birth, the actor took to Instagram on June 25 to not only share a photo, but to also send a special message to the team that helped her through the delivery. Alongside a photo of her child's cute and tiny feet, she wrote, "Pepe and I want to thank all the nurses at @cedarssinai who took such great care of my baby and I."

She then revealed why she loved the particular shot of her son so much, and it's an incredibly sweet sentiment. The former Desperate Housewives actor wrote, "I love this picture as a reminder that no matter how big you grow Santiago, you will always be my baby!"

"Hey @chrissyteigen is this the official hairstyle of breast feeding? 😂 I feel like I’m always in a messy top bun! Too hard to do anything else #MomProblems #BabyBaston"

Still, none of the photos showed off her little one's adorable face until now. And her fans were definitely thrilled to see all of the cuteness, if their comments are any indication. One person wrote, "He is beautiful!!!! Congratulations again!!!!" Another said, "The fact that he is literally waving hola! Omg that is the cutest thing."

Honestly, all you have to do is take one glance at the newest photo of Longoria and Santiago to know that they're definitely not wrong — it really is the cutest thing.