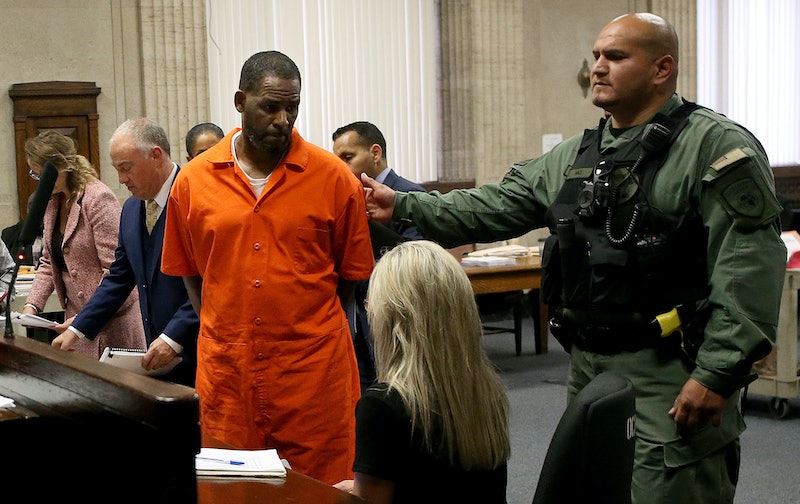 The first installment of Lifetime's docuseries, Surviving R. Kelly, dropped in January 2019, and its followup, Surviving R. Kelly Part II: The Reckoning, premieres almost exactly a year later on Thursday, Jan. 2. So before audiences tune in to Lifetime for the three-night event, here are some R. Kelly case updates that may help inform your viewing.

Since the docuseries dropped last January, the '90s R&B singer has come under renewed public scrutiny and faced criminal charges. Here's everything that's happened to Kelly in the past 12 months.

Feb. 22: Kelly is indicted on 10 counts of aggravated criminal sexual abuse of four alleged victims — three of whom were underage, per the Chicago Tribune. The alleged incidents took place between 1998 and 2010. The singer pleads not guilty to these charges, per the New York Times. The judge sets Kelly's bail bond at $1 million, and the 10 percent needed is paid by an anonymous woman, according to the Tribune. In December 2019, the Cook County judge sets Kelly's trial for Sept. 14, 2020.

March 6: Kelly is interviewed by Gayle King, which eventually becomes heated. When the CBS This Morning host asks if Kelly has ever held anyone against their will, the singer becomes agitated, eventually standing up and screaming, "You're killing me, man!"

March 6: Later that same day, the singer is put in a Cook County jail for failing to pay his child support, per the AP. He is released from jail on March 9, when someone pays his outstanding balance of $161,633.

July 12: Kelly is hit with federal charges in both New York and Chicago, NPR reported. In Brooklyn, the indictment involves "one count of racketeering related to kidnapping and four violations of the Mann Act, which prohibits transporting people across state lines for 'immoral purposes,'" the article detailed. In Chicago, the musician is indicted with both child pornography and paying off alleged victims with hush money. Kelly pleads not guilty to all federal charges, and the Chicago judge orders that he be held without bail.

Aug. 5: the "I Believe I Can Fly" singer faces two criminal charges in Minnesota, per NPR, where he is accused of participating in prostitution involving a minor. The incident is said to have involved Kelly and a fan in July 2001, when he allegedly paid her $200 to strip and dance for her, after which they engaged in what the article describes as "sexual contact."

Sept. 12: Kelly fails to show up to his initial Minnesota court date, according to the AP. At the time, he is imprisoned in Chicago. Per the report, the Chicago judge was not willing to give them access to Kelly until his case there was resolved. Kelly's lawyer claims they never got the summons, but the Minnesota court insists it was sent to the musician's last known address, per the article. The judge issues a bench warrant.

Dec. 5: In federal court, Kelly is charged with bribing a government official in August 1994 so that Aaliyah could get a fake ID, per the New York Times. The late singer's ID was then used to obtain a marriage license for the couple. Aaliyah was just 15 when they wed, per the article, and the marriage was later annulled. And although '94 would typically be outside the statute of limitations, the Times explained that since Kelly is also being indicted for racketeering during that time, the prosecution is also able to introduce other activities that were part of the same charge.

Kelly will remain in jail until his trials later this year.

More like this
A New Netflix Doc Will Explore The Unsolved Murder Of Jill Dando
By Sam Ramsden
Erika Jayne's Estranged Husband Tom Girardi Has Been Indicted On Fraud Charges
By Jake Viswanath
'RHOSLC’s Heather & Whitney Are Still On A “Friendship Break” After Season 3 Reunion
By Jake Viswanath
Vanessa Bauer Is Reportedly Dating Her 'Dancing On Ice' Partner
By Darshita Goyal
Get Even More From Bustle — Sign Up For The Newsletter
From hair trends to relationship advice, our daily newsletter has everything you need to sound like a person who’s on TikTok, even if you aren’t.