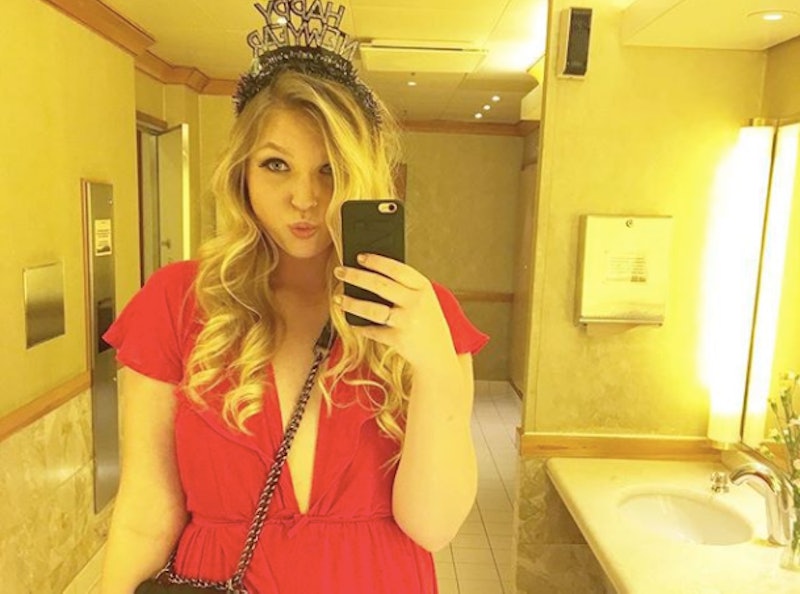 I have a complicated, borderline toxic relationship with almost all things related to New Year's Eve. The "new year, new you" mantra excites me for a few days, only to eventually stress me out to the point that I can't even look at an Equinox ad without feeling sheer panic. The idea of drinking champagne in large quantities, though great in theory, often ends with me crying into a bowl of spinach dip at 2 a.m. And sure, yes, it's a widely accepted fact that drunk spinach dip is, in fact, better than sober spinach dip, but still — it's never how you see the evening going.

But all those disappointments are nothing compared to my ultimate New Year's let-down. You see, the New Year's Eve bedazzled dress of my dreams exists every year. I see it online somewhere in late November and think, "Ah, yes. It's time." And while I order a slightly different style each season, the final look always has a few things in common. Wildly outside my comfort zone, great for Instagram possibilities, and never even remotely comfortable at all, the dress arrives and I'm momentarily ecstatic. But every year, I'm disappointed.

I rip open the package, eager to try on the dress and finally fulfill my life-long dream of looking like something in between a Real Housewife on a reunion special and Miley Cyrus during that period where she got really weird but we all secretly loved it. "This is the one!" I'll think for a moment, "Wrecking Ball" playing softly in the background. "Success!" I'll tell myself, just before the sequins inevitably scratch my arms, legs, torso, feet, and face as I slip the number on. Still, even as all 9,239,029 of those shiny, microscopic daggers somehow leave me with little cuts all over my body, I usually maintain hope that things will work out and this could still be The Year Of The Dress. But it never is. Without exception, I always hate how the dress looks and feels. And even though I should be used to this by now, until very recently, it somehow always made me sad.

I return the dress, opting instead for something equally fabulous (but not quite so shiny). And, truthfully, the dress I do end up with in the end is almost always something that's much more me. Even then, though, part of me still mourns for the dress that could have been, the me that could have been in the dress. It was only until this year — one more sequin dress bought, one more returned — that I realized what exactly keeps fueling the cycle.

Shoving myself into something that doesn't quite fit because the idea of it seems so wonderful is a concept I am quite familiar with. And around New Year's, with resolutions to be "better" and promises of a fresh slate coming at you left and right, it's one that most people can probably relate to, too. With New Year's comes the sudden, overpowering idea that it's time. Time to locate a part of yourself that needs fixing and get to work. Time to be that person, do that thing. Wear that dress.

So you squeeze and bend yourself into something based on the idea that you suddenly need to be a certain way — a certain version of you that isn't quite, well, you. You soften a little bit, harden a little bit somewhere else, bend over backwards, all to be that person. You won't recognize them, maybe, but New Year's often makes it seem like that's OK, that that's part of the transformation of it all. But it's dangerous.

When I failed to stop biting my nails every year, the feeling I remember more than anything else is embarrassment. And it wasn't because of my extra-short, nubby nails. It was because if I couldn't do this one small thing, then what hope did I have in becoming skinner? Being more popular? Getting a boyfriend? I felt like I had failed myself.

My perspective on what goals are important is, of course, different now (although my nails are just as short). The thing that remains the same, though, is that New Year's Resolutions are rarely just resolutions — they are often attached to a larger, heavy web of other ways to mold yourself into someone better. And while the basic concept self-improvement certainly isn't negative, the guilt and shame that are usually connected to it when it comes to New Year's can be damaging. For me, it's not the sparkly dress that's the problem, either. It's that I believed that it was the answer to achieving the perfect New Year's. It was the first domino in a series of dreams, goals, and resolutions that would ultimately make me into some version of myself I liked more.

It's still entirely possible that one day I will wear a sparkly New Year's Eve dress, and it will be glorious. But in the meantime, I've put the idea on the shelf in place of a new set of resolutions. And that means I'm not so much done as sparkle as I am with trying to force myself into any item of clothing — or version of myself — that doesn't feel quite right.

More like this
23 Luxurious Beauty Gift Sets That Are Totally Worth The Splurge
By Olivia Rose Ferreiro
12 New Year's Nail Ideas That Are Truly Stunning
By Jordan Murray
Cyber Monday Deals 2022: The Best Fashion Sales To Shop
By Dominique Norman
The Best Black Friday 2022 Fashion Deals To Shop This Year
By Dominique Norman
Get Even More From Bustle — Sign Up For The Newsletter