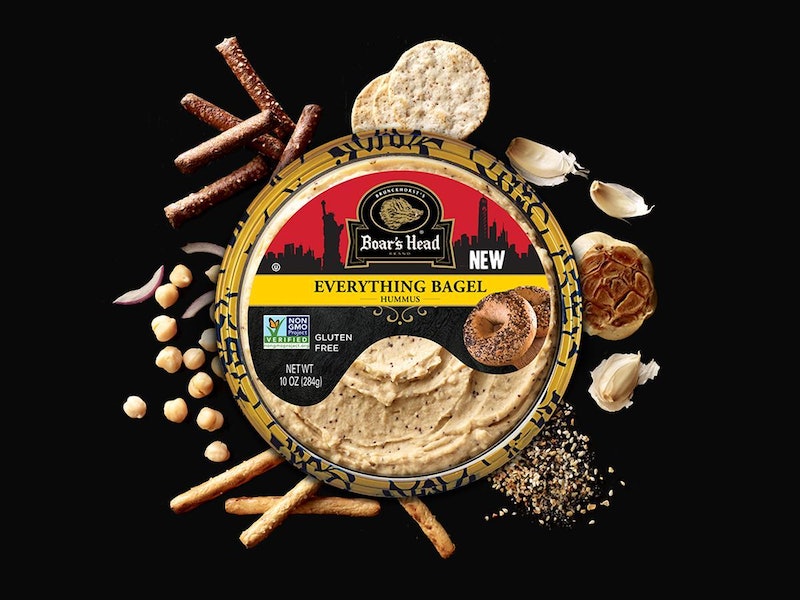 Everything bagels are great. It's just a fact. And in recent years, the flavor of everything bagels has been extending beyond actual bagels. Now, Boar's Head has released their version of everything bagel hummus. No need to shake your Trader Joe's Everything But The Bagel Seasoning into plain hummus anymore. You can now reserve it for literally anything else.

A photo of the Boar's Head hummus was posted by the food Instagram account Junk Food Adventures with the caption, "New! Boars head everything bagel hummus! 🌟 Found at Harris teeter! 😋" If you've ever had an everything bagel and hummus (separately or together, actually), then it's pretty easy to imagine what this tastes like. According to Boar's Head, "Everything Bagel Hummus is made with creamy steamed chickpeas and a savory blend of poppy and sesame seeds, plus salt, garlic, and onion for a freshly toasted New York City bagel taste."

As far as what to eat this with, the clear choice is to put it on an everything bagel for everything bagel inception. But, if you're not up to it, it'd also be great with bagel chips or pita or pretzels. Boar's Head suggests spreading it on flatbread and topping it with spinach, roasted red pepper, and an egg, and baking it. Fancy, fancy!

Boar's Head is not the first brand to make everything bagel hummus. Tribe has Everything Hummus that it describes as "onion-y, garlic-y, and poppy seed-y." Their recipe suggestion is to use on it on a BLT that's made on pita.

Hummus is just one product that's been infused with the flavors of an everything bagel, though. Check these out:

Trader Joe's Everything but the Bagel Sesame Seasoning Blend
Amazon

This seasoning blend has quite the following and can go on pretty much anything. Apparently, it's available on Amazon for $6.75 for those who don't live near a Trader Joe's, but it's much cheaper in the store.

Cabot makes Everything Bagel Cheddar Cheese, which is cheddar cheese with a bunch of spices smushed into the outside. It is impossible that this isn't delicious.

Graze Everything Bagel
The Vitamin Shoppe

This two-pack of spices in olive oil work on fish, on bagels (if you're making your own), or blending into yogurt as dips, according to Food52.

OK, so this one is not a food, but it is worth a mention in any article about everything bagel seasoning moving beyond just bagels. Yes, the world has an everything bagel pool float available for the buyin'. It's not only a steal at 12 bucks, but also features cream cheese in its design.

From hummus to cheese to pool floats, the everything bagel love is really out there. Don't forget, though: You can totally still get a regular everything bagel when a craving strikes. Don't let the original be forgotten in all of this.

More like this
On TikTok, Tinned Fish Date Night Is The Latest Viral Food Obsession
By Emma Carey
10 Pumpkin Recipes That Are Way More Creative Than Pie & Lattes
By Rebecca Deczynski and Alexis Morillo
10 Ways To Be More Empathetic To Your Partner
By Raven Ishak and Lexi Inks
Think Your Partner Is Cheating? These Tarot Cards May Confirm Your Suspicions
By Kristine Fellizar
Get Even More From Bustle — Sign Up For The Newsletter