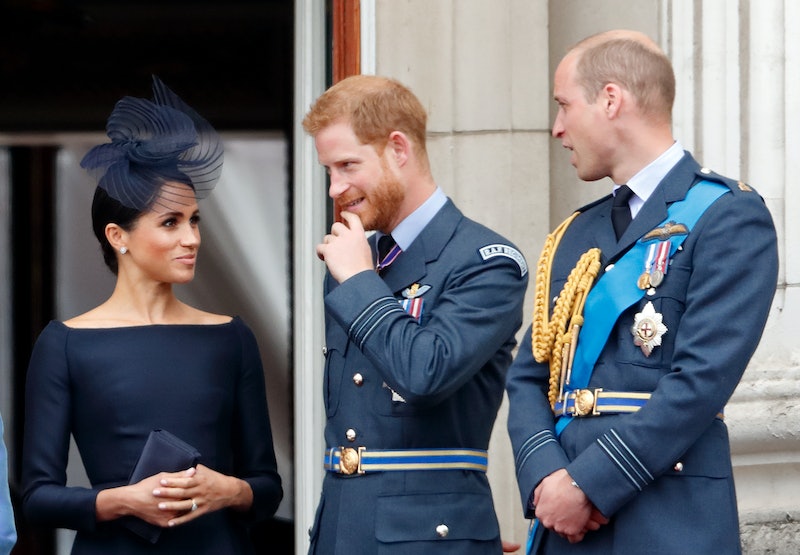 Monday, Jan. 13 is set to be a difficult day for the royal family. Several senior members of the monarchy, including the Queen, Prince Charles, and Prince William, will meet at Sandringham to discuss what the future looks like for Prince Harry, Duke of Sussex and Meghan, Duchess of Sussex when it comes to their royal duties. Harry is expected to join the royal crisis talks in person, reports the Guardian, while Meghan is likely to phone in from Canada.

The family are meeting to decide how the Sussexes will continue their royal lives. Earlier this month, Harry and Meghan announced they were stepping back as senior members of the royal family to "work to become financially independent" and spend more time in North America.

As the Guardian notes, the meeting will mark the first time the family has seen each other since the couple's statement. Sources have said the Queen, Charles, and William were "hurt" and "disappointed" by the news. In the Sunday Times, ITV News presenter Tom Bradby said "the fallout began at the time of the wedding in 2018. Really damaging things were said and done. The atmosphere soured hard and early, but few meaningful attempts were made by anyone to heal the wounds."

Bradby — who presented the documentary in which Meghan appeared visibly emotional about the level of scrutiny she was receiving — said "there is no doubt Harry and Meghan feel they have been driven out." Still, there are many questions that need answering.

Monday's discussion will aim to find a solution. Areas that are likely to be spoken about include:

It's unclear what Harry and Meghan intend to do next. But experts have a few thoughts. "As I understand it, they will definitely continue to support their charities — which doesn’t require royal status — and they would like to continue to assist the Queen, particularly in her work with the Commonwealth," Bradby wrote in the Sunday Times.

He wondered if Meghan would "take on a few big roles as a brand ambassador and do some work in television as an executive producer, perhaps on programmes that promote the causes and charities she has long been interested in." Harry, meanwhile, may "concentrate on the voluntary work he has done over the years." There's also a possibility he will take on commercial work in an area like ecotourism, stated Bradby.

BBC royal correspondent Jonny Dymond described Harry as "a man who desperately wants to get away from cameras, observers, outsiders, looking and filming and exploiting him," suggesting the couple's future plans may involve a lower level of media intrusion.

Touching on the idea that Meghan 'forced' Harry out, Dymond wrote: "The Meghan Myth is nonsense, with a generous sprinkling of spite, misogyny and some racism. The prince always wanted out. And together, with her brains and understanding and love, they think they have a way.

"Maybe the two sides can strike a deal over the next day, two days, invent a new structure that officials say might be emulated for a new royal generation. But will the couple really agree to the restrictions that service and survival demand?"

The coming days and weeks will certainly provide an answer.