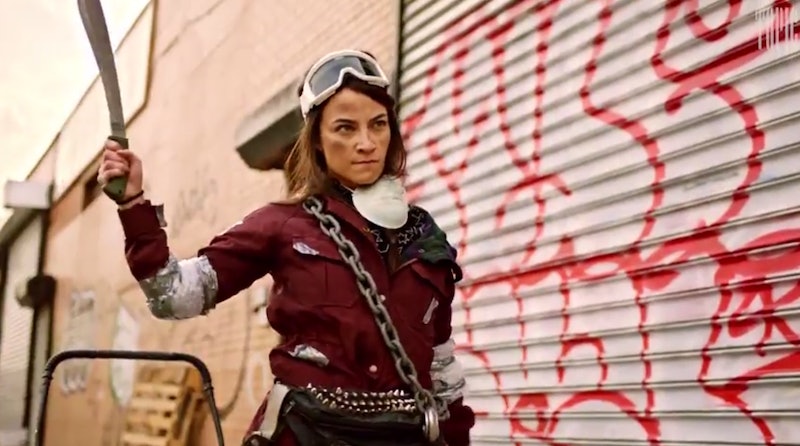 Difficult roommate conversations? They suck. Zombie apocalypses? They also suck. Unfortunately, just because one is happening doesn’t mean you can put off the other — and although nothing sucks more than having a difficult roommate conversation during a zombie apocalypse, sometimes, you’ve just gotta do what needs to be done. Adulting and all that, right?

Of course, navigating a tough roommate situation isn’t literally apocalyptic (or at least, it typically isn't) — although, as the fourth episode of Topic’s new five-part series, Everything Is Okay, underlines, it can certainly feel that way at times. In fact, Topic — an entertainment studio that utilizes every form of storytelling you can possibly think of (film, illustration, photography, audio, you name it) to tell stories which comment on our culture and political landscape — uses the series to examine not only the perils of living with roommates, but also a variety of other seemingly mundane difficulties of day-to-day life through an apocalyptic lens. Is your morning commute or your annual review actually the end of the world? Not usually, no. Does the dread they inspire sometimes make it feel like it’s the end of the world? Heck yes. And that’s exactly what “Roommate Meetings Must Go On (Even During the Zombie Apocalypse)” by Cirocco Dunlap, executive produced by Daniel Powell, and directed by Adam Sacks drives home.

When it comes to roommates, we’ve all been there: You bust your butt to make sure that the chores get done, that the communal necessities get replenished, and that you’ve got enough food to survive the rest of the month without dying of starvation due to the hoards of undead that prowl the streets of your neighborhood…

…Only to find out when you get home that your roommates don’t care that you’ve ensured their survival for the immediate future; they’re just pissed that you’re five minutes late for the roommate meeting.

Also, you’re stressing out Karen, your zombie roommate, by doing nothing other than unloading the supplies that are meant to keep you all alive. HOW DARE YOU.

You feel so unappreciated.

From there, it’s just one bomb after another: Two of your roommates started hooking up; they’re mad at you because your apocalyptic defense crew left blood on the couch after your last meeting; one of them accuses you of having finished the chocolate bar they were definitely saving for later (which you totally did, and about which you’re actually sorry)…

…And then they tell you they want you to move out.

For real. Because one of your previously non-zombie roommates just turned into a brand-new zombie. Like, right now. In a very literal sense.

But hey, you know what? You’re a grownup. You can handle this. You will deal with your recently zombified roommate, and then you will find a new place to live, and then you will get yourself moved out of the old place and into the new one by the 15th of the month.

For what it’s worth, whether or not there’s a zombie apocalypse going on, it’s worth brushing up on the things that no one should ever tolerate in a roommate — on either end. Your roommates might have been passive aggressive, which isn’t cool, but it’s also worth examining your own habits and seeing if there might actually be things you could work on, too. There’s also an art to setting boundaries with your roommates without upsetting anyone (although bear in mind that these techniques often only work with reasonable people; if I’ve learned nothing else from Captain Awkward, it’s that unreasonable people run by an entirely different set of rules where everything you do is always wrong, so all you can do is the best thing for you); that, too, is worth learning.

Just, y’know… know that you don’t have to fix the actual zombie you live with. Totally not your job.

Check out more of Everything Is Okay over at Topic.