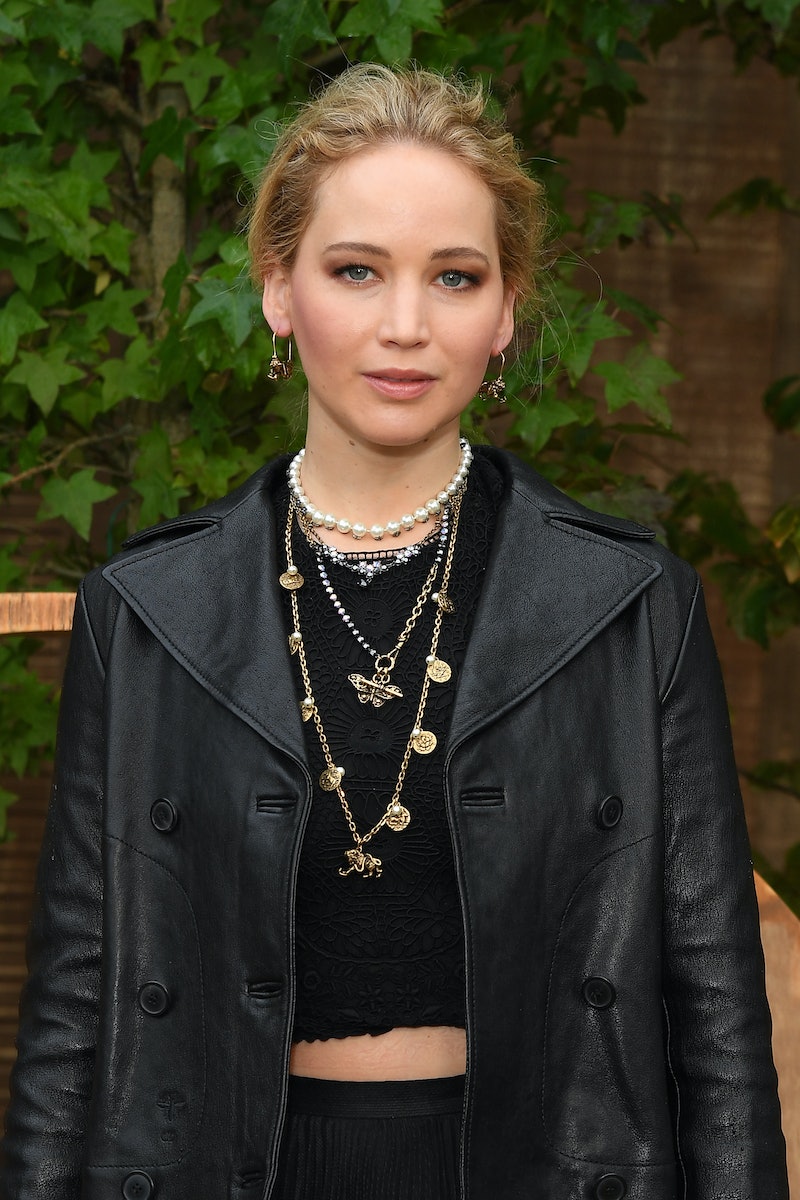 Jennifer Lawrence once famously said, "WHERE'S THE PIZZA" which is exactly what people at her wedding will be asking when it's time for the reception. The menu for Jennifer Lawrence's wedding to Cooke Maroney — which, according to TMZ, is happening this weekend — is pretty damn lavish. (Spoiler: there's something called cured egg yolk on the menu.)

On Thursday, TMZ reported they got their hands on the multi-course menu for Lawrence and Cooke's upcoming wedding in Rhode Island. To start, guests will dine on sweet potato flat cakes, brussel sprouts with cured egg yolk, smoked pork belly with pickled apple, and salt cod beignet hors d'oeuvres. Yes, those are just the starters and not words I randomly decided to put together. (Bustle reached out to Lawrence's reps to confirm the wedding date, as well as the menu, but did not receive an immediate response.)

For the main course, guests can choose between wood-roasted fish with herbs and lemon-infused butter, and 5-week-aged leg of beef with forager's sauce. Both options include side dishes, like heirloom roasted carrots, smoked new potatoes, and whey braised cabbage. Last but not least, guests will end their night with fire-baked sourdough bread pudding with chocolate, salted caramel and fresh apple, cauldron fritters with bourbon cream and cinnamon sugar, and — wait for it — house-made marshmallow s'mores.

"[Lawrence and Maroney] are both very low key and down to earth and want nothing more than to avoid a 'stuffy, pretentious' atmosphere," an insider told Entertainment Tonight in June. While additional details about Lawrence's wedding have been few and far between, they've reportedly invited around 150 guests. Back in April, a source suggested it'd be an "extensive family affair." Plus, J.Law is close friends with Amy Schumer, Emma Stone, and Brie Larson, so there will likely be a few famous faces as well.

As for gifts for the bride and groom-to-be, Lawrence's Amazon wedding registry guide is stacked with options, like a hand-hammered copper fire pit, a brushed gold flatware set, and a cashmere travel set that includes a blanket, eye mask, and socks.

Lawrence and Maroney — who works as an art gallerist in New York City — reportedly hit it off after being introduced by a mutual friend in June 2018. Eight months later, the actor's rep confirmed their engagement, and the pair celebrated with a party in Brooklyn in May. Lawrence described her relationship as "so organic" on the NAKED With Catt Sandler podcast in June. "I just met Cooke and I wanted to marry him ... You find your favorite person on the planet and you’re like 'you can’t leave,'" she joked. "So I wanted to take that offer."

Neither she nor Maroney have confirmed the wedding is definitely happening this weekend, but if it does go down on Saturday, there's a pretty good chance Lawrence will be walking down the aisle in Dior, since she's been a face of the brand for a while.

More like this
'RHOP' Stars Robyn & Juan Reportedly Got Remarried & Filmed The Ceremony
By Brad Witter
'Bachelorette' Vet Clare Crawley Revealed Her Stunning Wedding Photos
By Stephanie Topacio Long
'Bachelorette' Vet Clare Crawley Unveiled 2 Special Wedding Day Accessories
By Stephanie Topacio Long
5 Wild Theories About Miley Cyrus’ “Flowers” Music Video
By Jake Viswanath
Get Even More From Bustle — Sign Up For The Newsletter
From hair trends to relationship advice, our daily newsletter has everything you need to sound like a person who’s on TikTok, even if you aren’t.