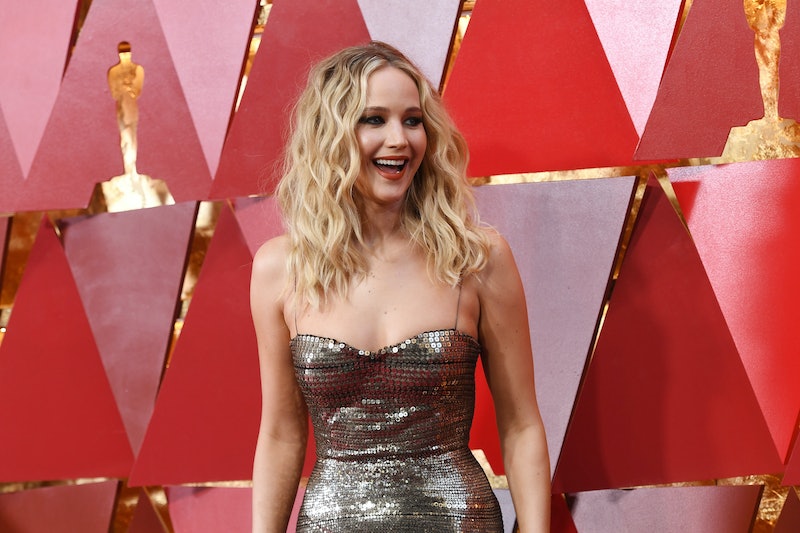 True to form, Hollywood's Most Relatable Denizen met her fiancé in a relatable way. We may not know much about their love story, but we do know how Jennifer Lawrence and Cooke Maroney met, and their first encounter sounds super chill, uncomplicated, and... yes, relatable. The Dark Phoenix actor and the art gallery director did not connect on a very exclusive celebrity dating app. They did not fall for one another on a movie set. They were not set up by their agents. They did not bump into each other at some super secret rich people club. Like so many non-famous people, famous people, and at least one royal couple, J. Law and Maroney's love story began all because of a mutual buddy.

Last June, Page Six reported that J. Law was in a new relationship with an art gallerist named Cooke Maroney. “They met through Jen’s friend Laura,” the outlet’s source said. “The relationship has been going on a few weeks. But they have been very private and careful not to be seen together.”

“Jen’s friend Laura” is, but of course, J. Law’s longtime BFF Laura Simpson. Simpson brought J. Law and Maroney together, J. Law and Maroney hit it off, and it looks like things have been working out quite nicely ever since. Nicely and seriously, that is: A few months after they started dating, they reportedly moved in together. A source told Us Weekly in January that Lawrence and Maroney already live together and “appear to be in it for the long haul.”

One month after Us Weekly reported that they live together and “appear to be in it for the long haul,” J. Law and C. Mar’s relationship took another big step. On Feb. 5, Page Six reported that they got engaged. A source told the outlet that J. Law, Maroney, and a "very noticeable" "giant rock" all went out to Raoul's in NYC, noting that the couple "seemed like they were celebrating and people were talking about it." As Page Six, E! News, Us Weekly, and People reported, a rep for the Oscar winner confirmed the news of the engagement shortly after the "massive ring" scoop surfaced.

J. Law officially unveiled her ring a few weeks later at Christian Dior's show at Paris Fashion Week, letting the world bask in the light refracted through the mammoth diamond. The couple celebrated their engagement with friends and family on May 11. A source Entertainment Tonight that the party took place at the River Café in Brooklyn, calling the event “pretty casual.”

While they have not officially announced when they will tie the knot or anything, it sure looks like they are prepping to walk down the aisle sooner rather than later: In April, a source told People that Cooke and Lawrence were spotted checking out potential wedding venues in New York City. When they do exchange their vows, it feels safe to assume Simpson, Lawrence's best friend and honorable matchmaker, will be there with wedding bells on.