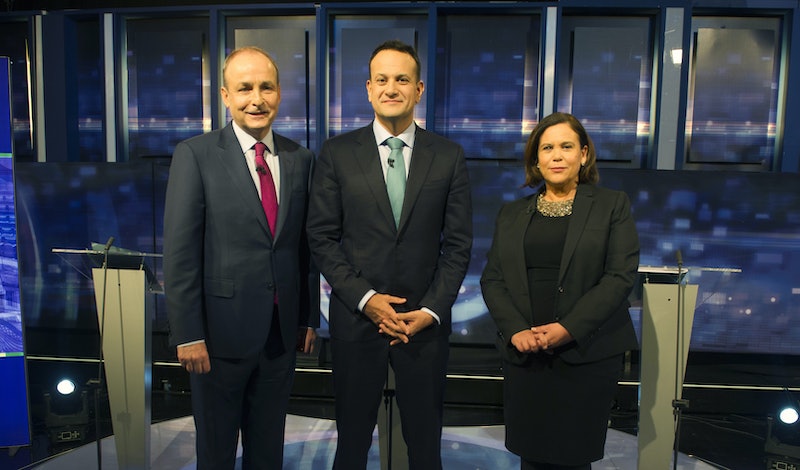 Ireland is currently standing at the precipice of an enormously important general election. On Jan. 14, 2020, taoiseach Leo Varadkar announced that the general election will be held on Feb. 8. Varadkar met with President Michael D Higgins at Áras an Uachtaráin (the president's official residence) and his request for Ireland's 32nd Dáil (parliament) to be dissolved was granted. Here are the key facts ahead of Ireland's general election.

The party currently in power, Fine Gael, is headed by Varadkar, who made history for being both the first person of colour to hold the position of taoiseach (Irish prime minister) and the first openly gay leader of Ireland.

According to a poll undertaken by the Irish Times on Feb. 3, satisfaction with the current government has dipped by 21%, which indicates that Ireland could be heading for a huge political shakeup in the upcoming election. Since the partition of Ireland in 1922, the country's two largest parties, Fine Gael and Fianna Fáil, have dominated the Irish political landscape. However, with the Irish Times poll pointing towards a surge in popularity for Sinn Féin and smaller parties such as Labour and Green, the 2020 election may be a historic one for Ireland.

The upcoming election is also critical for female political representation as, according to RTE, there's a record 162 female candidates on the ticket. That's two more than 2016's 160. This means that at least one woman will run in every constituency across the country for the first time ever, which is a massive assertion of Ireland's movement towards gender equality.

So here are the key facts ahead of Saturday's election. The rest is up to the Irish electorate.

What are the core issues in Ireland's 2020 election?

As the Guardian reports, it was initially believed that the climate crisis was set to be the main campaign topic of this election, especially as, in 2019, Ireland became the second country to declare a climate emergency. However, as the election has developed, the main concerns of voters have overwhelmingly been related to the state of the country's health care and also the housing crisis.

How have Ireland's party leaders voted in the past?

A quick online search can give you an idea of what's on the manifestos of each party, but what's been their leaders' stances on recent historical votes in Ireland? In particular, on the 2015 Marriage Equality Referendum, the 2018 Repeal of The Eighth Amendment, and the 2019 Divorce Referendum?

Varadkar called for a referendum on the Eighth Amendment (which put huge restrictions on abortion) in 2018 and was in favour of it being repealed. He was also pro the liberalisation of divorce in 2019 and, in 2015, he chose to come out ahead of Ireland's historic marriage equality referendum of 2015, saying he wanted to be an "equal citizen in [his] own country."

Martin was publicly in favour of repealing the Eighth Amendment. He was also pro marriage equality, saying his party's view was "clear and unequivocal on the matter." His party was also in favour of the divorce referendum.

McDonald spoke in favour of repealing the Eighth Amendment, explaining that it was "absolutely necessary in order to ensure that Irish women have access to proper and appropriate health care." She has also been open about her pro marriage equality stance, and her party was in favour of the divorce referendum.

Howlin spoke out in favour of repealing the Eighth Amendment, even criticising his former boss for being against it. Howlin is also publicly pro marriage equality and was reportedly a driving force in getting a referendum in the first place. Labour were also in favour of the divorce referendum.

The Green Party stood strongly in favour of repealing the Eighth Amendment, saying at the time: "This referendum is about moving towards a compassionate, caring approach to difficult situations and decisions that occur every day in Ireland." Ryan was also vocal about being pro marriage equality, and his party was in favour of the divorce referendum, too.

Can I still register to vote in Ireland's 2020 election?

Sadly the deadline for registration passed on Jan 22, 2020.

What time are voting station open for Ireland's 2020 election?

Polling stations are open Feb. 8 between 7 a.m. and 10 p.m. Voters will need to bring a form of photo ID with them to polling stations.

When will we know the results of Ireland's 2020 election?

The checking and counting of the votes begins Feb. 9 at around 9 a.m., and the first TD (Teachta Dála, an Irish MP) is likely to be declared elected between 2 p.m. and 3 p.m. The final results of the election might not be known until early the following week, although most constituencies are likely to complete their counting on Feb. 9.