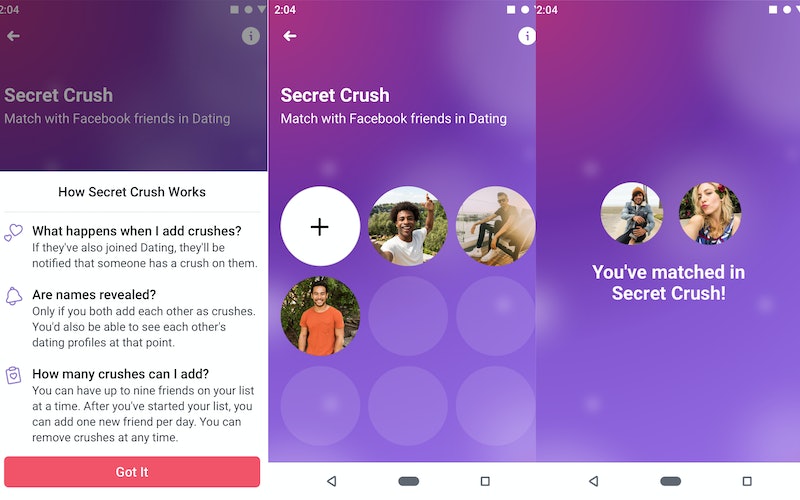 Facebook/Customized by Bustle
By Lea Rose Emery
May 1, 2019

Facebook may already be fighting for control of your attention, but you may have not realized it's also fighting for control of your heart. Facebook Dating, only available in select countries, is already helping people find love through their friendship network on Facebook. Now a new Secret Crush Facebook feature for dating has been announced, to help you show your crushes how you feel — without the risk of rejection. Announced at the annual F8 conference in California, this new feature sounds like something I could have easily have wasted hours on in high school — combined with some emo away messages and hints in my AIM bio. Those were simpler times. Now, if you opt-in to Facebook Dating — it's a part of the normal Facebook app, rather than a separate app — you can be a little more effective in letting your crushes know how you feel.

The company has done everything it can to allow you to give your crushes a nudge without having to reveal yourself. "People have told us that they believe there is an opportunity to explore potential romantic relationships within their own extended circle of friends," the company explained in a blog post. "So now, if you choose to use Secret Crush, you can select up to nine of your Facebook friends who you want to express interest in. If your crush has opted into Facebook Dating, they will get a notification saying that someone has a crush on them. If your crush adds you to their Secret Crush list, it’s a match! If your crush isn’t on Dating, doesn’t create a Secret Crush list, or doesn’t put you on their list, no one will know that you’ve entered a friend’s name."

Although in a way this sounds simple and straightforward, it's easy to see how this could go wrong — there's a possibility for high schoolers using it to tease or even bully each other, for instance. There's also a big question mark around whether or not you'd want Facebook to have access to data as intimate as who you have a crush on. That seems like information I wouldn't want to be leveraged against me in any way whatsoever. But others might find it an exciting way to let someone know that they're interested — and it allows connect to someone you already know, rather than browsing strangers in traditional dating apps.

But Facebook Dating isn't available everywhere — and folks in the US of A don't yet have access to it. Facebook Dating has been available in Colombia, Thailand, Canada, Argentina, and Mexico, and the company announced it will be expanding to Philippines, Vietnam, Singapore, Malaysia, Laos, Brazil, Peru, Chile, Bolivia, Ecuador, Paraguay, Uruguay, Guyana, and Suriname. So American daters are currently out of luck, but TechCrunch reports that Facebook Dating will be launching here by the end of the year — so it may be not the long until you're nudging your crush.

The idea of dating on Facebook isn't for everyone — in fact, some people prefer to use only dating apps that don't need Facebook accounts, because they want to keep their dating lives and their Facebook lives as far apart as possible. But, ultimately, it will be down to preference. Some people — probably those who already harbor feelings for those within their social circles — might be like the idea of Facebook's Secret Crush features, while others may stay far away. We're going to have to wait until later this year to see how Facebook Dating and Secret Crush performs in the United States. But remember — there are always emo song lyrics there if you need to drop a melodramatic hint about how you feel. Old-fashioned romance isn't totally gone.