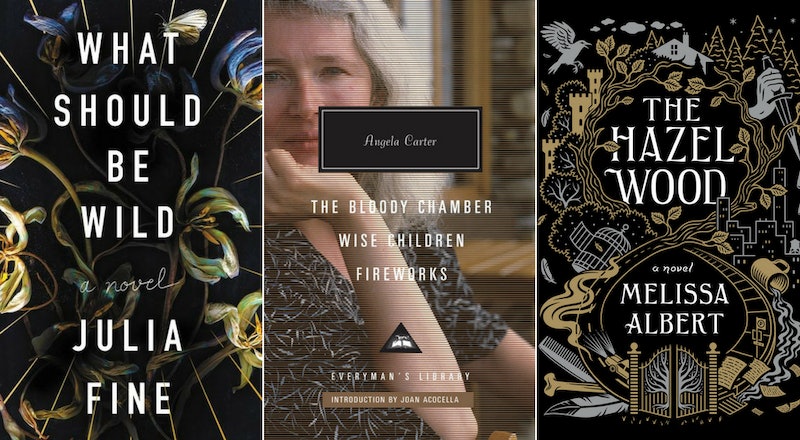 In this universe, Little Red seduces the Big Bad Wolf, Beauty transforms into a literal fur skin beast, and Puss in Boots uses murder to get what he wants. No, you haven't stumbled into a nightmare, but rather Angela Carter's classic short story collection The Bloody Chamber, a feminist romp through the familiar territory of fairy tales that turns tradition on its head.

When I was a kid, I avoided fairy tales as adamantly as I did beets and bedtime. It was the 1990s — the peak of Disney princess obsession — and to me, nothing was more immature, or for that matter, obnoxious than magic wands, hopeful damsels in distress, and the dashing princes that would inevitably come to save them. I wanted to seem grown up even if I wasn't, and that meant reading books for adults, not bedtime stories for kids.

What I didn't know then, what I didn't really discover until I took my first literary course in high school and found Angela Carter's stunning and subversive stories inspired by European fairy tales, is that the genre can be adapted and explored in fascinating ways.

Young me isn't the only person who has reservations when it comes to fairy tales. The genre has plenty of critics who lambaste it for its simplicity, its predictability, and its escapism. Because they have been told so many times before and in so many different ways, some argue, fairy tales don't have anything new to offer us. Anyone who is familiar with the genre, particularly Carter's work in it, understands the opposite to be true: the reliable structure of fairy tales make them ideal for exploring issues, something Carter does expertly well in her twisted tales.

An English novelist, journalist, and prolific short story writer, Angela Carter was best known for her brilliant and biting fairy tales. When it was published in 1979, around the same time as her hotly debated nonfiction work The Sadeian Woman and the Ideology of Pornography, the now famous The Bloody Chamber was seen by critics and readers as a collection of updated European fairy tales and folklore. The author saw it as something different, though. "My intention was not to do 'versions' or, as the American edition of the book said, horribly, 'adult' fairy tales," Carter famously said, "but to extract the latent content from the traditional stories and to use it as the beginnings of new stories." Over the course of 10 dark and tantalizing tales, that is exactly what she did.

In the collection's titular story "The Bloody Chamber," Carter uses the blueprint of Bluebeard to create a chilling narrative about a devious and porn-addicted husband, his naive young bride, and her ferocious mother who, in the end, saves the day in a shockingly violent way. In "Snow Child," Carter's short but unforgettable Snow White-inspired story, the young girl is caught in an incestuous and deadly sexual rivalry with her parents. Over the course of three uniquely different Little Red Riding Hood-inspired tales, Carter tells and retells the story of a young woman in the woods, only in her versions, Red is as fierce and dangerous as the wolf.

In each of her unique interpretations, Carter subverts traditional gender roles and upend classic fairy tale tropes to create fresh narratives for a contemporary audience. In doing so, she not only remakes old stories into something new, but reshapes old ideas about womanhood, femininity, desire, power, and love into something different, too. With violence, horror, and the erotic as her tools of choice, Carter explores the often taboo topics of female desire, body autonomy, women's self-preservation, and the destructive nature of love by applying a modern and decidedly feminist coat of paint onto the reliable frame of the fairy tale.

Take for example this passage from "The Erl-King," a twisted narrative inspired by the popular Erlking figure in folklore, a goblin-like spirit of the woods. In Carter's hands, the traditional tale is transformed into a darkly provocative story about a young maiden seduced by the titular character, who uses his powers to turn the objects of his affection into birds. Despite the danger she so obviously knows she is in, the young woman can't help but give into her carnal desires:

“His touch both consoles and devastates me; I feel my heart pulse, then wither, naked as a stone on the roaring mattress while the lovely, moony night slides through the window to dapple the flanks of this innocent who makes cages to keep the sweet birds in. Eat me, drink me; thirsty, cankered, goblin-ridden, I go back and back to him to have his fingers strip the tattered skin away and clothe me in his dress of water, this garment that drenches me, its slithering odour, its capacity for drowning.”

In this scene, Carter uses turns a passive heroine into a sexy and powerful force of nature who secures her own satisfaction and pleasure before securing her future and freedom by killing the Erl-King with her own hair.

In another passage from "Wolf-Alice," one of three stories inspired by Little Red Riding Hood, Carter imagines a scenario in which the young girl is not a dutiful granddaughter, but a feral child and a product of the woods:

“Like the wild beasts, she lives without a future. She inhabits only the present tense, a fugue of the continuous, a world of sensual immediacy as without hope as it is without despair.”

By recreating the character in this precise way, Carter grants her heroine a certain level of freedom the civilized women in the story, and possibly many of the women reading it, could never know.

Until recently, I had not read Carter's fairy tales since my freshman year of college when my comparative literature class used the collection to debate the author's feminism. Not unlike her critics, my classmates found Carter's use of violence, particularly sexualized violence, to be decidedly anti-woman. But rereading her stories now in the shadow of the Me Too and Time's Up movements, I see that Carter's particular brand of brutality is actually a feminist expression in itself.

Violence in fairy tales, especially in those of Carter's The Bloody Chamber collection, isn't just there to fill a quota for horror, or to shock readers with guts and gore. Rather, it can often be an effective device through which to examine complex issues of womanhood that are far more complicated to decipher in real life. By evoking extreme examples in fictional fairy tales, writers can safely explore the horrors of day-to-day life. For many women writers, and their readers, that means using violence, magic, horror, and eroticism as literary tools to dismantle, examine, and rebuild the their own concepts of femininity, romance, motherhood, body autonomy, empowerment, freedom, and so much more.

Carter may be one of the best known creators of the twisted adult fairy tale, but she is far from the only author using the classic form to explore modern life. Throughout literary history, writers have gone back to fairy tales time and time again to use the reliable structure and familiar tropes to unpack far less comfortable ideas. For many authors in 2018, that means using form to navigate gender and identity politics, sexual violence, systemized abuse, and America's rape culture.

In May, debut author Melissa Albert released The Hazel Wood, a young adult novel that mixes fantasy, mystery, and classic fairy tales to create a stunning story about girlhood, female anger, and self-determination. In March, Daniel Mallory Ortberg expanded on his wildly popular "Children's Stories Made Horrific" for The Merry Spinster, a chilling collection that uses folklore, fairy tales, and bible stories to examine and critique commonly held beliefs about gender, sexuality, and agency among other things. Earlier in May, Julia Fine created a brand new coming-of-age fairy tale that addressed the unruliness of the female body and the sometimes suffocating restrictions of girlhood in her debut, What Should Be Wild.

What Should Be Wild by Julia Fine, $16, Amazon

What these fairy tales all have in common, and what they share with Carter, is a feeling of both timelessness and urgency. The authors writing them are using an old outline to create a brand new narrative with a brand new purpose. Each time Snow White is retold, reshaped, or recreated, it offers something new to readers that can trust and feel safe examining uncomfortable topics in a reliably comfortable form. In today's reality, one where political divisiveness drives the country and fewer and fewer Americans feel they can trust the government or the media that reports on it, nothing could be better than that.