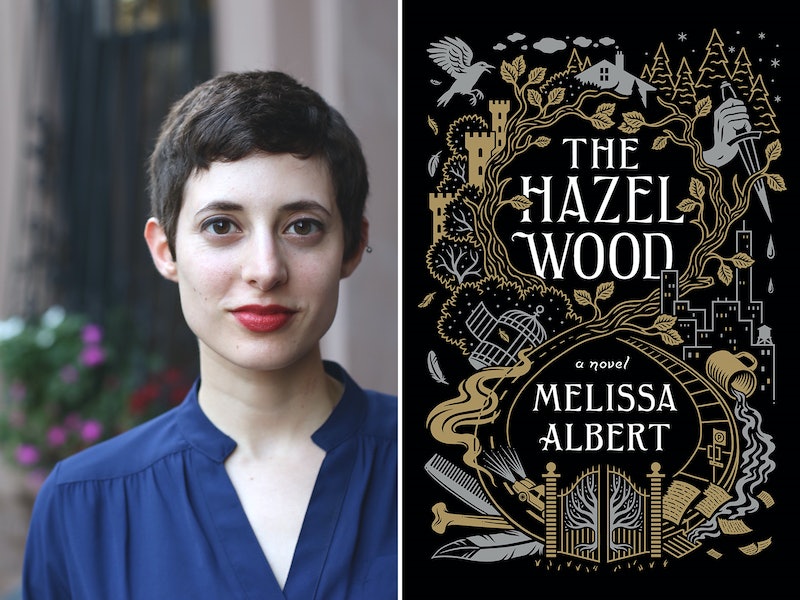 When it comes to fairy tales, most readers know exactly how the stories go: The baby is cursed at birth by a jealous rival; the wish is granted, but with unintended consequences; the ugly old witch is actually a beautiful being in disguise. If their format is so consistent, if their outcomes are so predictable, then why is it we keep returning to the familiar world of fairy tales?

"It’s hard to resist the bold, black and white morality of fairy tales: the brutal punishments, the rewarding of self-abnegation and beauty," The Hazel Wood author Melissa Albert tells Bustle. "Also addictive: the sudden reversals in fortune — paupers to princes, or vice versa — the sudden intrusions of magic on humdrum lives, the satisfying predictability of the more well-known tales."

Albert's debut novel, out now from Flatiron Books, is an original fairy tale story that is certainly addictive, but nowhere near predictable. A unique mashup of fantasy and mystery, The Hazel Wood tells the story of Alice, a 17-year-old girl who spent her life on the road with her mother, Ella, trying to outrun bad luck that never seemed to leave them be. After the death of her famous grandmother Althea Proserpine, the author of a singular collection of devious fairy tales about the "Hinterland" that boasts a cult-like following, Alice and her mom settle down in New York City, where they hope to finally have a "normal" life. That is, until Ella is kidnapped by a mysterious figure who claims to be from Hinterland, and Alice is forced to confront the fact that her grandmother's world of make-believe might not be make-believe after all. With the help of a classmate and Hinterland super-fan Ellery Finch, Alice embarks on the mission of a lifetime: She must find her grandmother's hidden Hazel Wood estate, a mysterious location where reality meets fairy tales, and bring her mother back to the real world.

"There’s something so exciting about the idea that your entire life can change in an instant if you can just find a door," Albert says of portal fantasies, like The Hazel Wood, that allow their characters (and readers) to escape into entirely new worlds in a matter of moments. She created one of her own because, according to the author, her "favorite fictional assumption is that we exist in a multiverse. It’s an idea that kind of makes my writer brain explode with excitement," she says.

The promise of the portal fantasy wasn't the only thing that got Albert excited when writing The Hazel Wood: the idea of using fairy tales to drive the plot was a titillating challenge she couldn't resist. "Fairy tales seem, when I reread them now, almost shockingly spare. They’re more of a skeleton you can hang different skins on," Albert says. "The Hazel Wood isn’t a retelling, but it plays with elements of lots of the tales I loved as a kid." Among her inspirations: “The Twelve Dancing Princesses,” “The Juniper Tree,” and "The Little Mermaid."

While it does include a lot of classical elements from fairy tales, there is another, more unexpected genre The Hazel Wood draws from: noir detective novels. The idea to mashup these two seemingly conflicting storytelling styles came to Albert while she was reading Helen Oyeyemi remarkable Snow White retelling, Boy, Snow, Bird, and simultaneously rereading Raymond Chandler's classic noir, Farewell, My Lovely. "Fairy tales have a deliberately desultory narrative tone," Albert says, "and I knew I wanted to juxtapose that heartless flatness with the voicey, metaphor-heavy crackle of noir fiction."

The result of this experiment is stunning: The Hazel Wood is a fun and fantastical adventure where the stakes feel as high, and as real, as any dark and twisty detective novel.

It may tell a wholly original, and completely fantastical, story, but the characters within the world of The Hazel Wood, feel very real. Many readers will find themselves relating to the imperfect mother-daughter dynamic between Alice and Ella, and that isn't an accident.

"The older I get the more I understand that families free of dysfunction don’t exist, and nobody I know is more than one generation removed from some kind of familial chaos," Albert says. "The sooner young readers can abolish any shame they might carry for having a nontraditional or imperfect family, the better, and I hope seeing diversity in family structure on the page helps."

Albert also hopes Alice helps young readers develop new ideas about female characters, and women in general, when they read The Hazel Wood. The novel's protagonist, Alice, isn't a traditional book heroine readers will instantly warm up to. Rather, she is an intense and often angry young woman who will force readers to confront their ideas about female characters and their likability. Whatever you do, though, don't call Alice "strong," a designation Albert, like many female authors and readers alike, are desperate to move away from.

"I hope the phrase 'strong female characters' will eventually be phased out," Albert says, "because for a book or a show to be considered good, complex characters of any gender will be a given."

As for whether or not Alice is a feminist, Albert wants readers to look past the labels and truly explore her character's story for what it is. "By its barest definition, every human being worth talking to is a feminist," she says. "So of course Alice is a feminist, but I think a courtesy all of us fellow feminists should extend to her and to other women—fictional and otherwise—is the understanding that you don’t have to be a role model for your story to be worth telling.

"Though I do think Alice’s insistence on determining the narrative of her own life makes her worthy of admiration," Albert says.