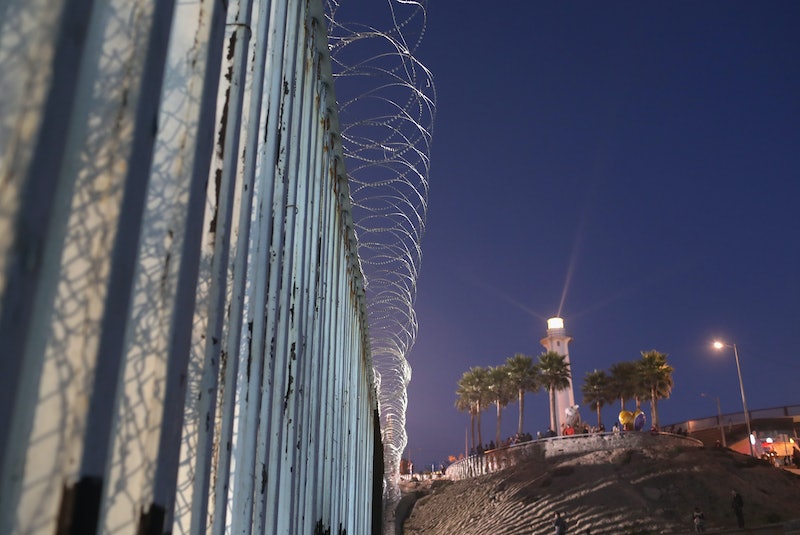 Earlier this month, a seven-year-old girl from Guatemala died in the custody of U.S. Customs and Border Protection (CBP), sparking outrage around the country. Relatives have now issued a public statement that challenges parts of CBP's story about Jakelin Caal Maquin's death. (Bustle has reached out to CBP for comment.)

The family's statement was read in a Saturday conversation with the press by Ruben Garcia of the Annunciation House, the sanctuary where the girl's father is staying. "There is much that is being reported that we have problems with," Garcia said. "This statement is a first step in trying to respond to some of the concerns that we have."

After Maquin's death, CBP told The Washington Post that she had "reportedly had not eaten or consumed water for several days." But her relatives disputes this assertion. "Jakelin's father took care of Jakelin, made sure she was fed and had sufficient water," they said in the Saturday statement. "She and her father sought asylum from Border Patrol as soon as they crossed the border. She had not suffered from a lack of water or food prior to approaching the border."

Her family argued that it's problematic for CBP to be "relying on forms" that are in English, which agents had Maquin's father sign. Neither he nor his daughter speak English; their first language is Q'eqchi' (one of many Mayan languages spoken in Guatemala) and their second is Spanish, per Radio-Canada.

Lastly, Maquin's family clarified that her official cause of death has not yet been announced, despite the fact that CBP told The Washington Post that she'd died of "dehydration and shock," the outlet reported on Friday. An autopsy examination is ongoing, Garcia said, and the results will not be released for a couple of weeks.

Maquin's relatives are not currently blaming her death on CBP. But they are calling for "an objective and thorough investigation" into the tragedy, and they ask that it utilizes "nationally-recognized standards for the arrest and custody of children."

Maquin and her father crossed the border to seek asylum on Dec. 6. She didn't appear to be ill at the time (her family agrees with CBP's account on this point). They waited together in detention for seven hours for a bus that would take them to a different custody station, according to CBP.

CBP said that the father reported that his daughter was throwing up right before the bus left, per Reuters. The vehicle arrived at the station an hour and a half later, and by that time Maquin was no longer breathing. Emergency responders tried to help her there and brought her to a hospital in El Paso. She died on Dec. 8 with her father by her side. According to CNN, Maquin had gone into cardiac arrest; doctors also found that her liver was failing and her brain was swollen.

"The family of Jakelin Caal Maquin is still coping with their profound loss," relatives said in their Saturday statement. "Jakelin, just five days past her seventh birthday, was a beautiful and loving child."

They added: "Jakelin and her father came to the United States seeking something that thousands have been seeking for years: an escape from the dangerous situation in their home country. This was their right under U.S. and international law."